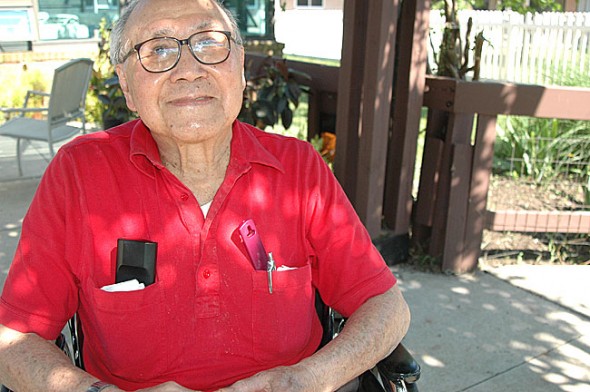 At age 90, Frank Kakoi looks back on a long and happy life, although it included a period in a U.S. government relocation camp during World War II, since Kakoi and his family are Japanese. Ernest Morgan brought Kakoi to Yellow Springs to work at the Yellow Springs News in order to release him from the camp. Later, Morgan brought the rest of his family to the village. (Photo by Diane Chiddister)

At 90, a wealth of memories

This is the first in an periodic series of profiles of Friends Care Community residents.

At age 90, Frank Kakoi has a good head for numbers, especially those that were meaningful in his life. For instance, he can recall the street address (757 Gladys Street) of his childhood home in Los Angeles. And 327 S. High is where his family lived for decades in Yellow Springs. But another number — Building 5, Block 5, Apartment 4 —brings back less pleasant memories. That’s his address in a southern California relocation camp where he and his family, along with several hundred thousand other West Coast Japanese Americans, were interred during World War II.

A resident of Friends Care Community’s extended care facility for the past four years, Kakoi is now confined to a wheelchair. But his mind is alert, his memory sharp and his smile is ever-present.

“My dad always said, be yourself and smile at people, and they’ll smile back,” he said in a recent interview.

And his father also influenced how Kakoi responded to being imprisoned in the relocation camp as a young man, simply because he was Japanese.

“We are a forgiving people,” Kakoi said. “Dad always said, if you get hit on one cheek, turn the other cheek.”

Another who might be a hero is Ernest Morgan, the founder of The Antioch Company who was the son of renown Antioch College President Arthur Morgan and the father of Lee Morgan, current president of the college’s board of trustees. It was because of Ernest Morgan that Kakoi and his family came to Yellow Springs.

For many years in the 1930s and 40s, Ernest and his wife, Elizabeth, published the Yellow Springs News, and it was at this time that Ernest saw an notice from the War Relocation Anthority that identified skilled workers who were living in the war relocation camps. Morgan hired Kakoi, a trained linotype operator, to work at the News in order to get him out of the camp, and years later, he brought Kakoi’s mother and sisters here too.

“Ernest was a great old guy,” Kakoi said. “He cared about you. He figured if you were happy with your work, your work would be better.”’

Kakoi never expected to end up in a tiny town in the middle of this country. He was small when his parents arrived from Japan in San Francisco. His father worked as a cook of American food, while his mother remained an excellent creator of Japanese specialities.

“We had sushi along with egg souffle,” he said of his parents’ multi-cultural menus.

He and his family moved to Los Angeles when Frank was small, living in what’s now called East Los Angeles. After high school, Kakoi received training in linotype, then began working for a Japanese-American newspaper in Los Angeles. He was a young man when he and his family were among the first to be required, after America entered World War II following the Japanese attack on Pearl Harbor, to leave their homes and move to a “relocation camp” in the Mojave Desert.

“All we could take with us was what we could carry in our hands,” he said.

Kakoi is quick to state that people in the camp were treated decently, although conditions were crowded. The Kakoi family— along with Frank’s parents, he had three sisters — shared a single room apartment, dividing the area into private spaces with blankets that hung from the ceiling. Kakoi was there a year when he got the call from Morgan of the Yellow Springs News. He didn’t expect to get the job, he said, but was happy when he did, although sorry to leave his family.

Kakoi worked for the News for four years, living as a single man in the Howe home on Limestone Street near the Antioch College campus, recently owned by the Lapedes family and now on the market. (There’s a photo of the home, along with photos of his sisters and parents, on the walls of his FCC room.) He was surprised and thrilled when Ernest Morgan later brought the rest of his family to Yellow Springs.

When the Morgans sold the paper to Kieth Howard, Kakoi returned to Los Angeles to get more training in linotype, earning a vocational diploma from the Los Angeles Trade Technical Junior College. He worked for several years helping to produce high school papers, first in Burbank and then in Beverly Hills. But in 1947, he decided to return to Yellow Springs.

The village was an even tinier town then, with a population of about 1,500, according to Kakoi.

“It was a quiet little town,” he said. “Ernest had assured me that I wouldn’t have to worry about discrimination here, and he was right.”

For many years Kakoi shared the South High Street home with his mother and sisters, working first for the Springfield News Sun, then for the Antioch College press and then back to Springfield. Other Japanese-American families were here as well, including the Kakehashis and the Asakawas, although the Kakoi family kept to themselves.

The heavy lifting involved in linotype work eventually affected Kakoi, causing the severe back problems that forced him to quit working. At that point, he lived a quiet life with his mother and sisters, spending his time raising vegetables and flowers in the family’s garden.

After the marriage of two of his sisters and the death of his mother, Kakoi continued in the High Street home with his remaining sister, until her death. He lived alone for four years before he began needing assistance, and made the move to Friends.

He also is surprised, at age 90, to have a girlfriend, Joyce Baker, another Friends resident. “He’s a nice man,” Baker says of Kakoi. “He’s a gentleman.”

Frank Kakoi is also a man who has, in his nine decades, lived through some of this country’s most interesting and unfortunate history. But through it all, he said, his father’s advice has served him well. He turns the other cheek and keeps smiling.