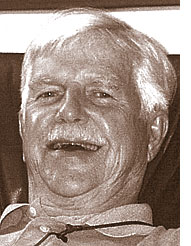 The youngest of three children, Cy was born and brought up in St. Louis, Mo., the son of Alvah and Mary Lewis Tebbetts.

Cy first arrived in Yellow Springs in 1947 to begin his freshman year at Antioch, where he majored in business administration. Following his graduation in 1952, he served two years in the U.S. Navy, returning to New York City in 1954 to marry his college sweetheart, Ilse Opton Tebbetts, and begin a sales career which ended only with his death.

The Tebbetts’, with the first of their four children in tow, arrived in Yellow Springs for the second time in 1957. The large national paper company for which Cy was working had assigned him to a four-state sales territory centered in Dayton. His boss, a born and bred New Yorker who thought the civilized world ended at the Hudson River, “broke” the news to him with some trepidation. Cy and Ilse were delighted.

The Tebbetts lived in the village for seven years before success in Cy’s job brought him a promotion to an administrative position in the company’s home office in San Francisco…but he was not cut out for high-rise corporate life. His heart, he said, was out on the street calling on customers.

For the third and final time, the Tebbetts’ came back to Yellow Springs in 1966 where Cy became active in a great number of community activities. He served terms on Village Council (during which he wrote the legislation that created the village Environmental Commission), on Planning Commission and on Community Council. He was a willing fund-raiser for numerous causes, most notably chairing or co-chairing drives for the renovation of the Friends Care Center, and for the rebuilding of the Antioch tennis courts, as well as organizing annual tennis tournaments to benefit Yellow Springs Chamber Music.

Cy passed on his love for tennis to many young people, both informally and, for several years, as an assistant tennis coach of the YSHS tennis team. He loved music — classical music (providing it wasn’t too modern), folk songs and show tunes — and sang for many years in the Community Chorus. He never learned to read a note of music and called himself a “mille-second singer,” which meant he picked up the melodies from experienced musicians who sang on either side of him in the bass section. Until poor health made it impossible last year, Cy was house manager for the local chamber music concerts.

He was a strong supporter of Antioch College, serving several terms on the Alumni Board, and working in the admissions office, where he developed a nationwide network of alumni to recruit students.

In his later years, Cy became an enthusiastic birder and traveled widely with binoculars at hand in perpetual search for interesting species.

He spent most of his business career selling office furniture — chiefly Hermann Miller furniture — and counted all of Dayton’s major industries among his customers. At the time of his death, he was still working part-time doing sales and marketing for Anthrotech, a firm of physical anthropologists located on Xenia Avenue.

Cy was a fixture in downtown Yellow Springs on Saturday mornings. As his daughter Robyn recalled in a recent letter to Cy, “Going grocery shopping with you on Saturday morning was the bomb! Walking around as you made the rounds, I felt as if I was with the most famous person in town. It seemed as if you knew everyone and everyone… wanted to talk to you. I was so proud to have you as my dad.”

Cy loved his family extravagantly and never failed to let them know it. He is survived by his wife, Ilse; by four children, Cathy Bahr (and Terry Slade) of Lewisville, Colo., Michelle Teegarden (and Joe) of Essex Junction, Vt., Robyn Yurcek (and Mark) of Winooski, Vt. and Chris Tebbetts (and Jonathan Radigan) of Hinesville, Vt. He is also survived by grandchildren Kyle and Derek Bahr, Lucas and Caitlin Teegarden, Brenna Yurcek, and Kelley Mitchell; by his brother, Tom (and Betty) Tebbetts of St. Louis; sisters, Dorothy O. (and Bill) Scott of Yellow Springs, Barbara (and Stuart) Pizer and Margaret (and Paul) Morin and a raft of nieces and nephews, and grand nieces and nephews.

A memorial service for Cy is planned for Saturday, Oct. 29, from 2–4 p.m. at the Glen Helen Building in Yellow Springs. Memorial gifts may be sent to Antioch College, c/o the Advancement Office, One Morgan Place, Yellow Springs, OH 45387.