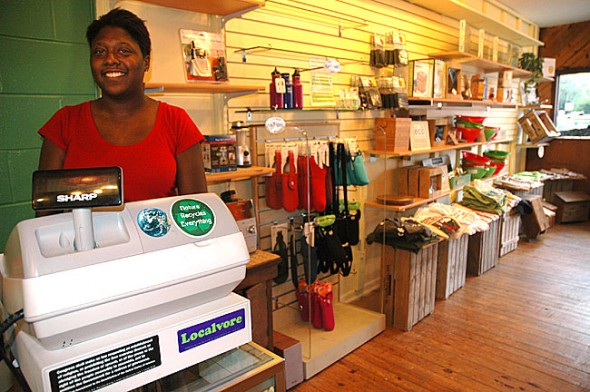 Rhonda Newsome, pictured above, and her husband, Jason, are the new owners and operators of Eco•mental on Xenia Avenue downtown. The local couple purchased the business from CJ Williams and Nancy Grigsby, and plan to continue most products while adding some new items. (Photo by Diane Chiddister)

Those who wish to purchase toothbrushes made from recycled yogurt containers, a solar lantern or bamboo cutlery can still do so at Eco•mental, the village’s go-to spot for environmentally sustainable products. While the store’s ownership recently changed, its mission and focus will remain the same, according to new owner Rhonda Newsome, who will run the store with her husband, Jason.

Rhonda Newsome will be a familiar face to Eco•mental shoppers, as she filled in for former owner CJ Williams over the past months. When Newsome heard the shop was for sale, she knew immediately that she wanted to step in as its new owner.

“I feel strongly about the environment and being eco-friendly,” Newsome said in an interview recently. “When CJ said she wanted to close the store, I couldn’t tell her fast enough that I wanted to buy it.”

And Williams is thrilled that she not only found a buyer to keep the business going, but a buyer from Yellow Springs.

“We were very excited that it’s someone in town, and they’re young and energetic,” Williams said, speaking for herself and her partner, Nancy Grigsby.

Williams and Grigsby opened the Xenia Avenue store, then called Living Green, in November 2007. While the store did well, it didn’t achieve Williams’ goal of providing enough income to hire someone else to run the business while she pursued other interests. Specifically, she had previously worked in social work and missed that personal involvement in people’s lives. That longing, as well as family matters, prompted the couple to sell the store recently. They will pursue a new business, Dolo, which sells electronic personal devices that enable older people or the disabled to live in their homes. Williams will work with her clients to train them to use the products, thus combining her interest in retail with social work, she said.

During the week Rhonda Newsome will be the face at the counter at Eco•mental, while her husband takes over on week-ends. The couple has four children aged 10 and under, for whom they have fixed up a playroom at the back of the store.

Fixing healthy food for her family is one of Newsome’s passions, and she plans to add new products, such as home cheese-making kits and mushroom gardens, to enable Yellow Springers to do so as well.

“It’s so fulfilling to eat something you had a role in making,” Newsome said.

She also plans to add a new line of organic clothing, lunchboxes made of metal rather than plastic, and to stock documentary films on sustainability issues. She hopes as well to sponsor classes and workshops on sustainable topics at the store.

Eco•mental will also carry the jewelry that Rhonda Newsome, a metalworker for 10 years, creates from recycled dinnerware.

And the store will continue to carry most of the products that customers have come to depend on, such as organic lollipops, plates made from natural fiber, bamboo kitchen ware and environmentally friendly household cleaning products.

In general, according to Newsome, they will stay with the ecofriendly theme but bring in “vibrant, modern, fun” items.

Newsome, 30, and her husband were both raised in Yellow Springs — her parents are former Antioch College Dean of Students Jimmy Williams and Rhonda Williams — and they are excited to now have a business in town. After going through Yellow Springs schools and then marrying and starting a family, the couple moved to Xenia for five years, but missed Yellow Springs. They returned three years ago.

With her kids hanging out at the store after school, her jewelry on display and her interest in the environment reflected in the store’s products, Rhonda Newsome has found a way to bring different parts of her life together.

“I’m so excited,” she said, of being the new owner of Eco•mental.