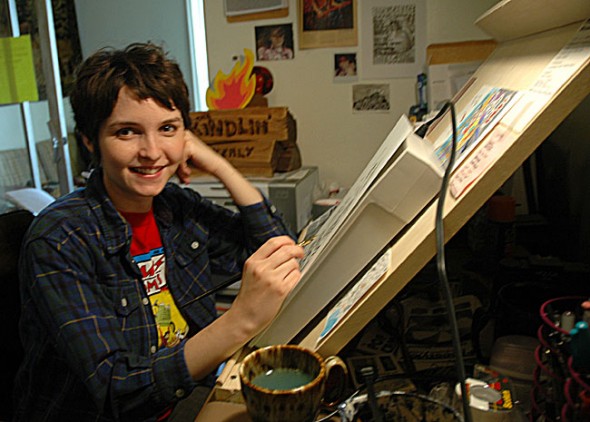 Edgy new zine in the village

From off the streets of Yellow Springs comes a new underground comic magazine with a punk-hillbilly aesthetic that’s at times edgy, dark, satirical, humorous and autobiographical — and always for adult eyes only.

These aren’t your children’s superhero comics, nor are they the funnies that appear in the newspaper. Instead the four-color digitally-printed anthology zines are filled with the original work of aspiring comic artists from around the region and prominently feature the stories, art and design of its editor, M Young.

Having published the 42-page fourth issue of the Kindlin’ Quarterly this month, M Young now looks to tap the village for comics, art, stories and poems for future issues. Submissions of original, non-political stories, art, photographs, essays, jokes and amusements for the winter issue are due Nov. 1.

The Kindlin’ Quarterly is available for $2 per issue at Dark Star Books and Comics or on the Kinfolk Productions Etsy page online. Subscriptions are $14 per year delivered to a mailbox or, if you’re within walking distance of downtown, hand delivered by Young.

In Young’s words, the publication is offbeat and homegrown with a “hillbilly goes to the city kind of feel,” she said. Young herself came out of the forests of West Virginia to the metropolis of Cincinnati to study with Eisner-nominated cartoonist Carol Tyler and Tyler’s husband, Justin Green, a pioneer of autobiographical comics in the 1970s. When she made her way last year to Yellow Springs, a place that she said has the best of both rural and urban life, Young set out to start the zine as an avenue for her comics and the work of other hopeful cartoonists.

“I wanted to make something that’s open to people who might not have an outlet and might not get their work printed,” Young said. “A lot of [cartoonists] want to make it but it’s really discouraging to make it if it’s just going to sit on a shelf.”

Young’s style grew organically when she was an Appalachian youth. Her poetry predated her ability to write, so her “granny” penned them for her. Comic art came naturally to her.

“There’s something inherent in childhood that some people just do cartoons,” she said.

Young later soaked up Archie and Jughead and Batman comics, as alternative comics didn’t often make their way to small towns in West Virginia. She published her first zine at age 12, a newsletter she circulated among friends.

“Most of the content was making fun of our math teacher,” Young admitted.

Today she draws material from her youth for her autobiographical comics. In “The Ghosts of Gad Dam,” in the Fall 2011 issue of the Kindlin’ Quarterly, Young retells a family legend that coincides with the building of a dam in the nearby town of Gad. The Spring 2011 issue features a story of Young’s honeymoon with her husband, Mark. “August 28: We heard a lifetime supply of Gordon Lightfoot over the Great Lakes Shipwreck Museum’s loudspeakers,” she writes. She also takes on various identities as the zine’s editor, including the EdiTHOR and EditTAUR in recent issues.

Young’s autobiographical style has roots in the 1970s autobiographical comics, like Clevelander Harvey Pekar’s American Splendor and Green’s comics. The Kindlin’ Quarterly is an offspring of late 1960s and early 1970s underground “comix” which were small press or self-published comics with adult themes and, at times, explicit content. R. Crumb was that movement’s most well-known cartoonist.

Today, small, self-published zines are back in. At the Comic Con convention in Columbus last year, word began to spread about the Kindlin’ Quarterly and many area comics jumped at the opportunity to have their work published in her zine. Already she has 15 contributors and 28 pages of submissions in the pipeline for the next issue.

“There is no shortage of people who are making comics who are ready to publish,” Young said. “I’m overwhelmed in a good way.”

But Young said she hopes for more local contributions to the magazine as well, and might create themes for future issues. Eventually Young looks to create a weekly drawing group for local artists and cartoonists to come together and share their work.

“That sort of energy feeds on itself and gets people excited about what they’re doing,” Young said.

Whether or not the Kindlin’ Quarterly is a money-maker, for Young it’s a way to move towards her ultimate goal of publishing her own full-length comic book.

“It’s mostly just that I wanted to do [the magazine],” she said. “It’s a stepping stone.”

Visit http://www.etsy.com/people/KinfolkProductions to purchase individual issues or a subscriptions. Submissions can be sent to