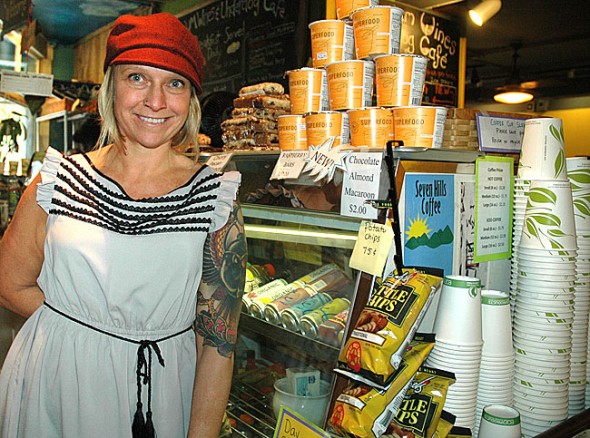 Wendy Copper of Yellow Springs, pictured above, and her business partner, Doug Siegal of Bloomington, Ind., have launched a new business, Vigilant Eats. Their first product, Organic Superfood Oat-based Cereal, is being sold at the Emporium/Underdog Café. You can find the cereal beside the oatmeal on the cream stand. (Photo by Diane Chiddister)

You might call Wendy Copper and her business partner Doug Siegal food warriors. The Web site of their new business, Vigilant Eats, lays down the couple’s mission like a gauntlet.

“If we are correct in our assertion, vigilance and integrity will help us form an unyielding army of healthy, creative, and productive humans,” the statement says. “Together, energized by real-food, selfless action and concern for humanity’s future, we shall improve the quality of food and education entering the bodies and minds of our fellow citizens.”

Copper, of Yellow Springs, and Siegal, of Bloomington, Ind., have taken an initial step toward their goal by releasing their first food product, Organic Superfood Oat-based Cereal. Locally, villagers can find the cereal at the Emporium and Underdog Café.

The cereal has been a hit with those who tried it, according to Copper in a recent interview.

“They’re surprised how delicious it is, because it’s so healthy,” she said.

In fact, initial accolades for their product caused the two foodies to enlarge their initial order. While they originally intended to start small and produce the first batch of cereal in Copper’s own small commercial kitchen, they ended up hiring a company in California to package 20,000 containers of the product.

The cereal garnered raves at the Expo East Natural Food show in Baltimore in September, according to Copper. Along with health food stores and coffee shops signing on to carry the product, a representative of Starbuck’s also expressed interest. Currently, discussion with the huge national chain is ongoing, Copper said.

It’s all a little overwhelming, and Copper said her life now involves promoting the product from 6 a.m. to midnight, except for the time she spends with her two children, aged 14 and 4.

“It’s interesting how little it feels like work,” she said. “I’m doing what I love. It’s what I believe in and I think it will make a difference.”

Specifically, Copper believes passionately that we are what we eat, and that food not only affects our health but our state of mind and energy levels.

The Superfood cereal contains nibs of cacao believed to enhance mood as well as goji berries from Tibet, considered an effective anti-oxidant. Its health benefits include 11 grams of protein, which is “higher than most protein foods,” Copper said. The cereal’s rolled oats and oat flour are organic and gluten-free, sweetening comes from organic coconut palm sugar, organic maple syrup power and organic yacon (a tuberous root and natural sweetener from South America), and the remaining ingredients of cinnamon and hemp flour are also organic.

It was important to Copper that the cereal be gluten-free, having discovered that her own energy level and sense of well-being increased when she eliminated gluten from her diet. More and more people are discoverring that they’re gluten intolerant, she said, and it’s difficult to find cereals they can eat.

Eliminating gluten was the last of many diet changes that Copper has made in her life, beginning with giving up meat when she was in the seventh grade. Her family had a variety of health ailments, and Copper became convinced that poor eating habits contributed to the problems.

She went on to eliminate dairy products, and found that her seasonal allergies and joint pain disappeared. And when Copper stopped eating gluten, which is found in most wheat products, she felt better than ever.

“It’s a big deal,” Copper said of the changes she’s felt since eliminating certain foods from her diet. “It seems we as a civilization have had to go through so many stages to realize that what we put in our body affects how we feel. It’s getting back to the fundamentals.”

While she was raised in the Dayton area, Copper had been living in northern California when she moved to Yellow Springs in 2004. Her interest in good food led to a job at the Sunrise Cafe, and then her own business producing vegan cheesecakes and truffles.

Not surprisingly, she met Siegal on a live raw food forum online. Together, the two decided to go further down the path of creating new and healthy food products.

It’s been a year and a half since they began experimenting with the cereal concoction that Siegel made for himself each morning, in order to add nutrients and create a superfood product. They found a distributor of goji berries in Tibet, a source of gluten-free oats in Wyoming and cacao nibs and yacon in South America. The hemp flour comes from Canada, since it’s not allowed in this country.

“This process has been a vast education, much more so than I ever imagined would be involved for a product,” Copper said.

All along the way, Copper and Siegel have benefitted from the knowledge of other food warriors who went before them, who generously share their knowledge and expertise.

For instance, their distributor, Earth Source Organics in Vista, Calif., is a woman who Copper said cured herself of cancer by eating raw foods.

“There were all these kind people helping us along, because they believe in our mission and our ability to make it work,” she said.

Copper is well aware that the Vigilant Eats cereal has a large ecological footprint, and she and Siegel aim to do what they can to decrease it. For instance, she said, they hope to begin raising goji berries locally if others who have already begun doing so have success. And they would like to create a co-packing facility locally like the one they’re using in California. They contacted all the facilities in Ohio and Indiana but needed to go west to find one that’s organic, she said.

And if their first product is successful, they also plan to create more products, perhaps smoothies or protein bars, Copper said.

But for now she’s very busy promoting her new product to Dorothy Lane Market and Trader Joe’s, and she will soon venture to Columbus and Cincinnati with her wares.

For more information on Vigilant Eats, check out the Web site at http://www.vigilant-eats.com.