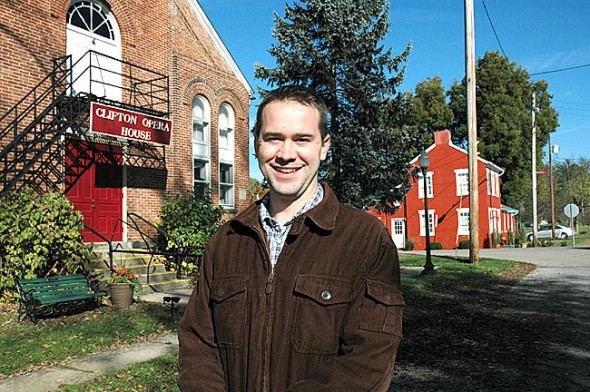 Yellow Springs native Alex Bieri is running for the position of mayor in Clifton. (Photo by Lauren Heaton)

Clifton to vote in a new mayor

The historic marker in front of the Clifton Union School House speaks of Clifton’s 19th century legacy as an important milling town along the stagecoach road. The village that was once home to Civil War General Whiteman and one of the largest gristmills in Ohio still supports a small but vibrant community — one that former Yellow Springs residents Alex and Minerva Bieri chose for their family five years ago. Since then, Alex Bieri has become a Clifton Village Council member, and this election year he is running unopposed for the position of mayor.

Yellow Springs residents won’t vote for Clifton’s leaders, but votes are of little consequence to Bieri. According to Clifton’s village charter, if no one had stepped up to succeed Clifton’s current Mayor Stephen McFarland, who declined after 24 years as mayor to run for a seventh term, Bieri, as current Council president, would have been asked to assume the position by default. But Bieri, 31, is happy to step into a leadership role in the community where he and his family have chosen to settle. The village’s rural setting is a natural fit for his job as the human resources director of Michael Farms in Urbana, which employs 20 permanent and about 100 migrant workers, mostly Spanish-speaking. And Bieri feels a sense of propriety and responsibility for helping to maintain the town’s historic buildings and the multi-generational community that make a tight-knit home there.

Running for mayor, even unopposed, is a political exercise. But Bieri likes politics on Clifton’s scale, where he is campaigning among his neighbors (literally), and his budget consists of a few hundred dollars for a pamphlet he either mails or hand delivers to the 60 or so homes in the six-block grid that makes up the entire city.

“Politics here are done in more of a pragmatic, business format — we’re already neighbors and we all have a vested interest in each other anyway,” he said. “As mayor it’s less about some grand platform as much as extending that process.”

For a short period of time in the 1980s, Clifton’s mayor held court to hear the pleas of those caught by the village’s temporary police officer hired largely to catch drivers speeding through town toward state route 72. But normally, the mayor of Clifton acts like a village manager, executing policy set forth by a four-member Council and managing a budget of approximately $50,000, including general fund expenditures of about $31,000, according to Clifton’s Treasurer Sue Chaznov, who quoted figures from the 2011 budget. Aside from maintaining village roads, the budget supports the maintenance of the school house and grounds and the opera house, as well as special events, such as a village Easter egg hunt and a community bonfire scheduled this weekend for Halloween.

Clifton’s population has fallen from 179 people in 2000 to 152 in 2010. But the town still has a post office, two restaurants, a senior center, a handful of businesses and a fire station (maintained by Miami Township and manned by the Township Fire-Rescue squad.) That local culture is something Bieri wants to protect in order to maintain Clifton’s intimacy and local character.

Bieri grew up in Yellow Springs, the son of Abby Cobb and George Bieri, and graduated from Yellow Springs High School in 1999. He and Minerva, also known as Mine, have two children, Daniela, 6, and Diego, 4. The family speaks a mixture of Spanish and English at home, and from their house part way up the hill, they can see two-thirds of the town, including the 3.6 million lights the Clifton Mill illuminates each Christmas season and the edge of the Clifton Gorge.

Clifton, the Bieris’ current home, and Yellow Springs, their former home, are connected by the Little Miami River, listed on the National Scenic Registry. They note that they can walk a path between the two places which is uninterrupted by development and has never been altered from its natural state. The river was an important power source that led to Clifton’s growth as a milling town that processed woolens for soldiers in the War of 1812 and meal and flour during the Civil War era, according to the town’s historic marker. The village, chartered in 1838, was located on the rail line between Springfield and Cincinnati and established an inn for travellers, as well as a local economy and arts scene out of the Opera House. The gorge that Cornelius Darnell is believed to have jumped while running from the Shawnee camped at Chillicothe is one of the town’s major tourist draws, Bieri said. He feels a connection to that past and to the current place, and he wants to be part of helping to preserve the treasure of both the land and community around him and his family.

As future mayor, Bieri has already mapped his first order of business to appoint a three-person zoning board of appeals, which the village has never had, but which is an important vehicle for ensuring that citizens’ voices and concerns are heard, he said. Bieri also hopes to make a concerted effort to renovate and reopen the school house for possible uses as a dance studio, a dojo, an art gallery and a coffeehouse. He is proud of the other private operations in Clifton, such as the mill, Webber’s Antique Mall, a potential new bed and breakfast, and Jerry’s Country Corner diner, and he hopes to use his skills as a communicator and facilitator to help the village leverage its unique resources to maintain a strong vitality.

“There’s a certain kind of self-sufficiency to the village — we’re not just a country outpost in the township. We are a self-governed incorporated village,” he said. “A lot of people here are dedicated to the idea of preserving our history and the unique nature of our independent village.”