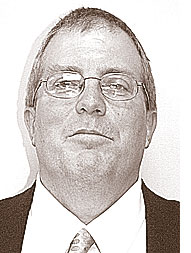 At Village Council’s Nov. 7 meeting, Village Manager Mark Cundiff announced that he is a finalist for the job of city manager in Sidney, Ohio. He is one of five finalists for the position. Cundiff has been the Yellow Springs manager for three years, since November 2008.

“This is the one job in all honesty that I’m interested in,” Cundiff said of the Sidney position, stating that Sidney, where he worked for nine years, is the place his family lived longest and the place they still consider to be home.

In response, Council President Judith Hempfling applauded Cundiff’s work, and stated she would be sorry to see him go.

“Mark has done a great job,” she said. “If this job doesn’t pan out, he will continue to do the hard work he does for the Village.”

In an interview last week, Cundiff emphasized that the manager position at Sidney was a job he has long sought, and that his decision to apply is linked to wanting that job rather than being dissatisfied with his current position.

“I’ve always thought that if given the chance to be manager there, I would do it,” he said. “It has nothing to do with being unhappy here.”

Cundiff stated that he is not seeking other jobs, and that he has turned down job offers he’s received since coming to Yellow Springs.

Cundiff had worked for nine years at Sidney, as city planner, community development director and finally as assistant manager, leaving that job in 1998. And though he and his family have been gone 13 years, they maintain close friendships with Sidney residents, he said.

Recently, Council approved a restructuring of Village government at the request of Cundiff, who had stated that the Village manager job is currently too demanding. The problem, Cundiff told Council, is that without an assistant manager the job lacks backup, and requires the manager to oversee too many departments. The restructuring involves the hiring of an assistant manager, and the elimination of two current positions, the assistant Village planner job held by Ed Amrhein and the economic sustainability coordinator position held by Sarah Wildman.

However, the demanding nature of the job was not a factor in his decision to apply for the Sidney position, Cundiff said last week, emphasizing that Village Council has supported his request for the restructuring, which would soon alleviate the problematic situation.

“I have a very supportive Council here,” he said. “I’m appreciative of that.”

Cundiff said he told Council he had applied for the Sidney job before they took the final vote for the Village restructuring.

“I wanted them to know,” he said. “They decided to go ahead anyway.”

The Village has suffered from a revolving door of managers in the past decade, with the manager before Cundiff, Eric Swansen, staying on the job less than two years.

Along with wanting to live in Sidney, Cundiff said he is attracted to the different challenges involved in managing a small city (Sidney’s population is about 20,000) compared to a village. Adding to that challenge is that in some ways, the city has fewer resources than Yellow Springs, as Sidney voters have not approved a levy as they did here. Sidney is mainly dependent on income tax revenues, Cundiff said.

Presiding over Village operations during the recession offered its own challenge, Cundiff said. Though the local property tax levy passed, income tax revenues declined, as they did in almost all municipalities. Still, the Village under his leadership tackled several longstanding problems, including getting the Village wastewater treatment plant in compliance with EPA regulations (using a federal stimulus grant for $750,000 that Cundiff applied for); beginning work on rehabbing the Village water plant; an ambitious program to repair and maintain Village streets; updating the Village Comprehensive Plan; upgrading the skate park; and adding more renewable energy sources to the Village portfolio.

Asked about his greatest challenge as the Village manager, Cundiff said, “I think people’s expectations are higher than the resources here.” Still, he said, “most people are nice” and he understands that the nature of his job is that some people will be unhappy with his decisions.

Cundiff emphasized that if the Sidney job does not come through, he will stay in Yellow Springs. Cundiff and his wife, Peggy, live in a house on Livermore Street, having moved with their daughter, Kelsey, who is currently a freshman journalism student at Indiana University. Peggy, who works for Yellow Springs Chiropractic, has especially enjoyed living in the village, and walks regularly in Glen Helen, he said.

“If it doesn’t work out, I still have a supportive Council and a great community,” Cundiff said.

Other items from the Nov. 7 Council meeting will be covered in next week’s paper.