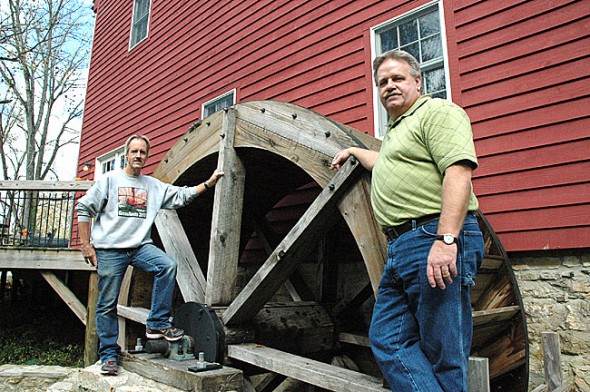 Jim Hammond and Randy Gifford have teamed up, with help from friends and family, to reopen an expanded Grinnell Mill Bed & Breakfast. The mill will also hold open house hours on Saturday and Sunday afternoons. (Photo by Lauren Heaton)

Yellow Springs resident Jim Hammond has a weakness for restoring historic artifacts. He once agreed to store a 1928 Seagrave fire engine (as a favor to the Xenia Fire Department) at the Drierite Company he operates in Xenia. When the rescue squad came for the truck about three years later, they found that it had been restored to its original condition, à lá 1928.

Hammond restores old planes, and recently a carousel, too, he said sheepishly. He just can’t help himself. And the old Grinnell Mill was no different. When in 2004 Antioch University no longer knew what to do with the dilapidated structure, Hammond stepped in and devoted considerable time and personal resources over the next four years to restore nearly every inch of it, plank and nail.

So it isn’t hard to imagine why, after its self-sustaining operation as a bed and breakfast was interrupted last spring, he couldn’t sit idly by and risk the mill slipping back into the annals of lost and forgotten history. Donna McGovern, who had operated the mill’s bed and breakfast for almost four years, stepped down over the summer to run the Glen House B&B just up the road from the mill. The bed and breakfast operation was the only source of revenue the mill had to support itself. So last month Hammond went down to the mill to get it started again. He has been changing sheets and washing toilets ever since.

“I didn’t want it to be a burden on the Township or the Foundation,” Hammond said of the Miami Township Trustees who partnered with the Glen Helen Ecology Institute and the Yellow Springs Historical Society to form the Grinnell Foundation that oversees the mill.

The Grinnell Mill Bed and Breakfast is now open for business again, with more flexible ways to use and see the building. Because there is no longer an inn keeper, accommodations now include three bedrooms for rent, one of which is on the first floor and has two queen-sized beds. The whole building is now available for day or overnight rental, as well, and is already booked by a Xenia family for the Thanksgiving weekend. The mill is also available to rent for business retreats, day events, and parties or small conferences. And its historic features make it ideal for school tours as well.

Hammond wants more people to see the mill as a monument to the long milling history of the Little Miami River. The mill was first built in 1812 as a gristmill for making grain flour from corn and wheat. The original mill stones and some of the pulleys and gears are assembled just as they would have been 200 years ago when a reverse paddle wheel (which Hammond rebuilt according to old photographs) was powering the operation. The mill also illustrates the advancement of technology that turned the inefficient paddle wheel into a turbine, that by the turn of the century was using the water’s power to grind almost six times as fast as before, Hammond said.

The mill is now open for extended hours on Saturdays, 11 a.m.–4 p.m., and Sundays, noon–5 p.m. or by appointment. Guides will be available during that time to give historic tours of the building for those who are interested. Hammond wants the building to be available as a resting place for visitors and passersby.

“The place is here to be enjoyed,” Hammond said. “We have open house hours, but people don’t have to leave. They can just hang out, sit on the porch and catch some sun, or sit by the fireplace and crochet.”

Others have joined the effort to keep the mill open. Hammond has help from his wife, Libby, who does all the laundry and bakes the muffins he delivers every morning for breakfast. Randy Gifford, a Reichley insurance agent who knows Hammond through his business, is now taking all the mill’s reservations. Gifford and his wife Carrie keep the bed and breakfast going when the Hammonds are unavailable. Hammond’s mother Jackie is volunteering to hold open house hours, along with other friends Don Fulton and Butch Mault, who helped restore the mill’s ironworks several years ago. More volunteers are welcome to help keep the operation going.

“The reason we restored it was to make it available for the public to use and enjoy, so that people could learn about the history,” he said. “The community owns the place…it kind of belongs to everybody.” 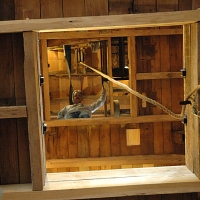 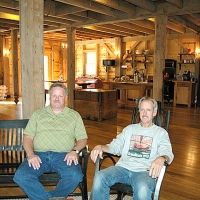