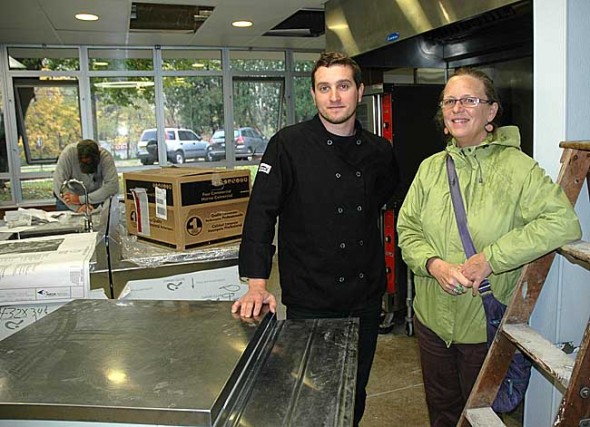 Antioch College Chef Isaac DeLamatre made plans for the opening of the college’s new kitchen and dining room, which opened on Nov. 9 in the basement of Birch Hall. Dean of Community Life Louise Smith led the design of a cooperative, locally-sourced plan to feed the campus. (Photo by Lauren Heaton)

Traditional cafeterias are designed to be about choice. But what’s the difference between institutional chicken fingers and institutional mac and cheese? Not much, according to the folks at Antioch College, who are out to create a campus dining model that exchanges the anonymous din of feeding from the trough for a more intimate and participatory, socially and environmentally responsible way of eating.

The college’s innovative approach to food was born partly of the need to recognize the ecological demands of food service and also to honor the experience of eating in community. According to Louise Smith, dean of community life at the college, “It’s how we live in community together — we break bread together, meditate together, cook together, in addition to doing governance together…it’s part of the larger coversation of what’s our responsibility to the planet? To the local community? To our bodies?”

The unusually small size of the current college community provided the other justification for a decentralized dining system. With 35 students living on campus and about that many faculty and staff there during the week days, economies of scale would have been difficult to realize in the kind of cafeteria setting the college formerly operated in the Union building, Smith said.

The plan drafted in August, when Smith started her job full-time, was to utilize the kitchen on the ground floor of Birch Hall, where all the students currently live. The college’s Renewal Commission had it remodeled for student use in 2005, and this year’s dining committee of Smith, Joyce Morrissey, Tom Brookey, Reggie Stratton and Nick Boutis believed it to be an inviting, well-proportioned space to upgrade, utilizing much of the good commercial equipment from the Union’s kitchen.

“It’s a beautiful space with lots of windows that we thought would foster a sense of belonging to a dorm and to the core community for first-year students,” said Smith, who had memories of baking cookies there to deliver to students one Christmas.

Although students have been on campus for almost two months, they only recently got the chance to eat in their own dining hall. After many frustrating weeks renovating the campus kitchen, the Greene County Health Department finally signed off on the new dining hall, and students had their first meal there on Wednesday, Nov. 9. On Tuesday this week, head chef Isaac DeLematre was serving split pea soup, black beans and rice, roasted root vegetables from area farms and braised greens from the college farm.

“I’m taking input from students and working with what we have coming from the farms,” DeLamatre said. “It’s going great.”

While the campus is well fed now, making the new dining plan operational was slower and more costly than college leaders had hoped, largely due to the complicated county health and building codes that regulate commercial kitchens. While the Union building kitchen satisfies many of the regulations, the building isn’t heated, it’s not ADA compliant, and aside from the cafeteria, the remainder of the large building would be vacant. But installing a new kitchen at Birch was complicated.

The county code is very fussy about the specifications of a commercial kitchen, which, it says, shall have cooking stations lit at 50 candles and dishwashing at 20 candles, stainless steel countertops, a separate sanitizing sink and a handwashing station not more or less than 18 feet from where food is being served. Fire safety, temperature control, food storage, plumbing and electric must all conform to code, which Smith has all but memorized by now.

So Stratton, the college facilities manager, had his crew upgrade the Birch kitchen by reusing the dish room, three refrigerators, two ovens and other cooking equipment from the Union kitchen and buying only a freezer, one dishwasher and a prep sink and countertop.

Students were scheduled to arrive on Sept. 24, before the renovation would be complete. In a survey, a large majority of them had already indicated interest in doing some amount of cooperative dining. So the college asked Current Cuisine to help cater some meals temporarily, believing that the students could take care of many of their own meals as well until the kitchen was up and running.

However, it turned out that Greene County not only prohibits the students from preparing meals together outside of an approved kitchen, it also required that the catering be done in a space with servers, sneeze guards, and both hot and cold service stations, Smith said.

So for the first six weeks, Current Cuisine served lunches and dinners at the Corretta Scott King Center during the week, and students started the cooperative system by helping to set up and clean up after their meals, with the help of community life student worker Sara Brooks and residence life manager Randle Charles. The college also held a weekly Wednesday potluck with the Yellow Springs community at the First Presbyterian Church. And several community members invited the student body to dine in their homes, Smith said. While the dining challenge was costly and stressful for both the college and the small local caterer, it also created unexpected opportunities for community building, according to Smith.

“The potlucks have been great, and there’s been a lot of support in town for us,” she said. “It’s been one of the ways we’ve taken lemons and made lemonade.”

The situation brightened significantly when Chef DeLamatre started work full-time last month. Most recently the sous chef at Sunrise Café, DeLamatre attended Antioch College in 2003–04 and then worked for several years on organic farms, including Orion Organics in Yellow Springs. He helped run a food co-op in Hillsboro, S.C., where he also started a CSA, before deciding to go to cooking school. He is thrilled to be connected to the college’s own farm, which welcomed its first eggs last week and is expecting to harvest its first chickens this fall.

“It’s like a dream come true for a chef — having such a close relationship to a farm,” he said. “Students can go to the farm and bring up whatever they want to eat. That’s as good as it gets.”

DeLamatre also supports the cooperative dining scene. He recalls being less than enthusiastic about his college dining experiece, and feels excited about being able to help students get the kind of organic, local, fresh food they want. He has met with them a few times already, and found them to be “conscientious about the food and food systems they support, and how it affects the world around them. They make dietary choices that reflect that,” he said.

“The students are excited, they kind of arrived that way,” he said. “They’re excited to be able to choose what they eat, which is something immediate [they] can do — establish their values and make it happen immediately — it’s gratifying and empowering.”

The cooperative model Antioch is establishing isn’t new. Boutis, who is part of the committee and also managing sustainability on campus, started out in a dining cooperative at Oberlin College in the 1980s. The group, part of the National Association of Student Cooperatives, had 90 members who were all involved in creating their menus, purchasing the food, cooking it and serving it themselves. Cooperatives can be less expensive than traditional dining plans, partly due to a reduction in waste on trays, which encourage people to take more than they can eat, Smith said. The co-op food plan at Oberlin, according to Boutis, cost about half as much as the traditional dining plan.

“Our ability to charge less for dining services will increase our ability to focus on our academic model,” Boutis said. “It plays in the context of making practical decisions with not just ecological sustainability but economic sustainability.”

Dining on campus has been one of the biggest challenges the community life group has faced, mostly because “food is so fundamental,” Smith said. But with the kitchen now fully operational, it won’t be long for students to be “serve-safe” trained to be an integral part of the community dining and food service program. Smith feels the ultimate plan is solid and responsible on many levels.

“It’s in keeping with our vision, and it will be a vital part of what makes community life here good,” Smith said. “And I’m confident that when we’re up and running, we’ll be cost effective.”