Gravy is at once practical and sublime. Preparing gravy cleans the pan and distills the luxurious essence of food. Eating local foods is much the same. Gather produce close to hand, and you will reap incredible flavor and nutrients.

I thank the Yellow Springs News for opening this community forum on our village’s local food systems. I am a home cook, a gardener and, increasingly, an advocate for Yellow Springs businesses. In co-founding the town’s Winter Farmers Market, I have met my farmer and the rewards of their fine company. And so it was, this week, that I was preparing my contribution for not one but two potlucks…

I had forgotten the main ingredient so I was fortunate to catch my husband at Tom’s Market. “Quinoa,” I told him. “Q-U-I-N-O-A, it should be near the rice.” He found it in aisle 1 next to the bunny pasta. His first impression was just the same as mine, “It looks like couscous.” He returned home triumphantly and made up two batches so that I could fill my bowls to heaping. Lighter than rice, quinoa is a seed and an excellent source of both protein and fiber. Within 15 minutes, it puffed up beautifully on the stove and was folded into the roasted vegetables and light gravy I made. 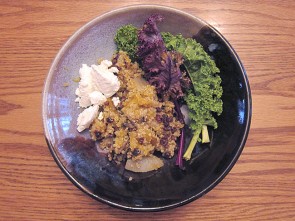 The adjacent events appeared wildly different but, in truth, they were the same at heart. The first at Radical Roots Farm brimmed with youth, enthusiasm, and improvisation. The second, Cox Arboretum’s Volunteer Holiday Potluck, hosted a buoyant band of white hair retirees: wise, dedicated, resilient. I felt equally at home at both events united as they were by the love of good soil and the rich bounty it yields.

I brought the same dish to each potluck by splitting a roasted pumpkin between the two. The recipe was inspired by the Thanksgiving spread of my older sister. Main dish or side, it may be blessed to grace great gatherings for, so far, that has been its destiny.

Preheat the oven to 400 degrees. Slice the pumpkin in half. Remove the seeds and save for planting or toasting. Salt and pepper the pulp and add the sage. In a large bowl, mix the sliced pear, onions, and mushrooms, the minced ginger, and the oil. Fill the cavity of the pumpkin and, using a spatula, flip cut side down on a roasting pan. Roast for an hour.

Prepare the quinoa: Bring the quinoa and water to a boil in a saucepan; reduce to a simmer, cover, and cook until the water is absorbed; then spoon into the serving dish.

Remove the pumpkin halves from the oven, carefully flip them, and set aside to cool. Deglaze the pan of its caramelized drippings by pouring on the apple cider and working with a wooden spatula. Add the gravy to the vegetables, and fold the veggies and currants into the quinoa. Refill the pumpkin halves and center in the dish. Top with crumbled goat cheese. Serve warm or chilled.