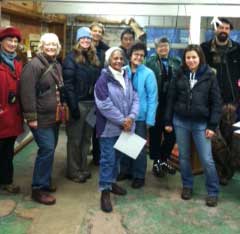 Birders flocked to Glen Helen Saturday to help count the feathered friends that call the Glen home, at least for the season. (Submitted photo by Ann Simonson)

It was a fairly challenging day for bird finding on Saturday, Dec. 17, the official date of the 2011 Christmas Bird Count. The Glen Helen Ecology Institute drew about 15 people who fanned out in small groups throughout the Glen, John Bryan Park, Clifton Gorge, and the village to seek out the birds.

“Everyone came back with that look,” GHEI Director Nick Boutis said of the confounded birders who participated in the count.

But with persistence, the group did find some birds — a total of 681 individual birds of 27 different species in the Glen alone (a far cry from last year’s unofficial Glen count of 2,500 birds of 39 species). The count included 73 Carolina chickadees, 158 robins, and the ever popular (but not native) 243 starlings. Birders also found a dozen male cardinals roosting together in a tree near a clearing by the Grinnell Mill.

While the weather kept a lot of birds in their more protected spaces, the migratory winter wrens, hermit thrushes, dark eyed junkos and white throated sparrows were right at home in the mid-30s air.

“They laugh that stuff off,” Boutis said.

Further abreast of the Glen itself, the 15-mile count circle around Yellow Springs included villagers who counted the birds in their yards. One resident with open water in his yard at the south edge of the village found a great blue heron. A resident just north of the village reported seeing a screech owl. Other backyard birds included turkey vultures, Canada geese, a malard, a kestrel, woodpeckers, jays, crows, titmice and others. According to Boutis, the diversity of birds villagers were finding in the quarter acre behind their houses matched what one would expect to find in a park.

“It’s exciting to see what sort of habitat we support in our back yards, once you clear the honeysuckle and other invasives out,” Boutis said.

Even further outside the village but still within the count circle, birders out at Oak’s Quarry on State Route 343 found the day’s only bald eagle soaring over the parking lot. The quarry has a wide diversity of sparrows, including white crowned sparrows and field sparrows, who apparently appreciate the more disturbed habitats.

“If you like to watch little brown birds, there’s a great opportunity right in our area,” Boutis said.