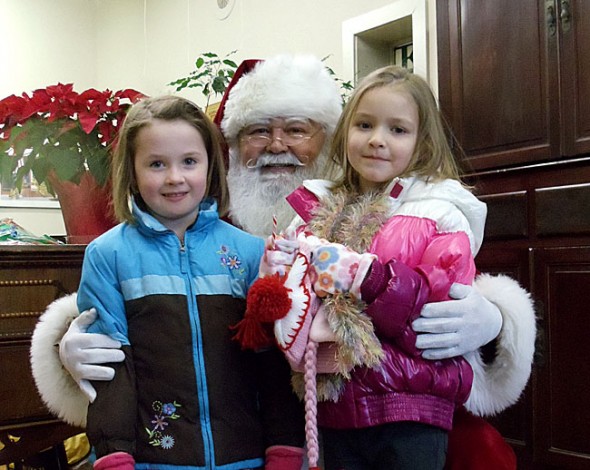 From left, Raechel Meyers, 5, and Ellia Strieter, 7, posed with Santa Claus on a recent weekend in Yellow Springs. (Submitted photo by Karen Wintrow)

Claus or Haws? — In search of the real Santa

I must have been about eight years old when my older brother showed me the pile of wrapped Christmas presents in my parents’ closet, thus dashing my belief in Santa Claus for good. Classmates at school had hinted at the fictitiousness of the jolly bearded gift-giver, but I needed to see it with my own eyes. Down went the mythical Santa Claus, and the Easter Bunny and the Tooth Fairy along with him.

When, what to my wondering eyes should appear, but a man in a red-and-white suit walking through downtown Yellow Springs last weekend! He surely looked like Santa Claus, and he knew a lot about bringing children joy and helping them avoid naughty behavior. But was this the real Santa Claus?

This Santa drives a car, but as he explained to an inquiring youth, we’re in the midst of deer hunting season in Ohio, so Santa parked his reindeer-drawn sleigh at Wright Patterson Air Force Base. That way Ruldoph won’t be mistaken for a prized buck.

Other children asked about the sleigh’s navigation system (“does it have GPS?”) and the whereabouts of Mrs. Claus (“minding the workshop, baking cookies,” he responded) and Santa’s answers seemed to hold up. Some brazen children even tugged on Santa’s beard, and yes, his beard is natural.

Whether he is the real Santa, or a 64-year-old City of Dayton water department employee named Steve Haws, there are at least five reasons why the world needs Santa Claus now more than ever.

Problem #1: Consumerism run amok. Santa solution: Simple pleasures.
Black Friday stampedes aside, our culture’s increasing obsession with the accumulation of material goods is taking a toll on our planet, pocketbooks and sanity. The commercialization of the holidays is but one symptom. Fourteen years ago Claus, or Haws, satisfied children with simple toys like trains, sleds and dolls; now children ask for iPods and laptops. Little girls used to ask for a dress; now they demand name brands.

Earlier this season, a little boy pushed away a Chutes and Ladders board game that Santa gave him because it wasn’t what he asked for. And a little boy recently came to Santa with not just one wish, but three pages with pictures of toys cut out from magazines pasted on them.

“I still think for the most part, you give a child any toy and they’re happy,” said Claus, ever the optimist. His singular goal is to put a smile on the face of every child he meets, whether with a simple toy or treat, a joke, or just a few moments in his mirthful presence.

Problem #2: Naughty children. Santa solution: Self-evaluation.
All children misbehave, and while the reward/punishment system might not be the best parental tactic, it’s at least somewhat effective for a few weeks every December. Many children want to know whether they’re on Santa’s naughty or nice list, Claus said, and are therefore either entitled to their heart’s desire, or can expect a lump of coal come Christmas morning.

Santa turns this question back around to the children — “What do you think? Have you been good?” A few weeks ago Claus asked a little boy if he was good, when he had just fought with his sister not 10 minutes prior. The boy was ashamed, then promised to not pick a fight with his sister, at least for the next two weeks.

Problem #3: Cynicism. Santa solution: Believe.
There is plenty of cause for cynicism today, from the sluggish U.S. economy to our nation’s deepening debt to the danger of hydraulic fracturing for shale gas to the slate of Republican Presidential candidates, depending upon your political persuasion. But a pessimistic outlook shouldn’t apply to perhaps the most selfless person on the planet.

“You’re just some fat, old man trying to make a quick buck off of giving toys to kids,” Claus recalled her saying. Santa responded by telling her that her attitude would make life difficult and she admitted her parents had said the same thing. Even still, it was a sad moment for Claus.

“I think kids need to believe in something good,” Claus explained. “They need to believe that there is someone on the face of the earth that’s thinking of them all the time — that wonders what they’re doing.” And Santa is not just for kids, he said.

“For older people it reminds them of their childhood and a more carefree time,” Claus said.

Problem #4: Inequality. Santa solution: Everyone gets a present.
Even before Wall Street Occupiers pressed the issue, many of us have been painfully aware of the unjust and inequitable distribution of income, wealth and resources in this world, not to mention the continuing discrimination of people based upon race, religion, gender or sexual orientation.

“Everyone in Santa’s eyes is equal,” Claus said. “There’s no difference in color, sex, religion. Santa loves everyone equally.” He even loosened up on his punishment of naughty kids.
“Santa Claus asks you to be good, but you still get presents anyway.”

Problem #5: Greed, selfishness, every other wrong in the world. Santa solution: Giving is receiving.
Being Santa, or playing him for a few weeks every year, is a rewarding experience.

“I would terriby miss it,” Claus said. “I just enjoy putting a smile on people’s faces.”

Though the children are the ones receiving gifts, it is Santa, and the parents, who revel in the happiness of little ones when they tear open their Christmas presents. After all, they live in a more magical, less cynical, and very merry world, a world we can live in, too.

Maybe my parents bought my Christmas presents all those years ago. And maybe Haws will shave his beard come January. But I’m holding out some hope that Santa exists. I don’t think I want to live in a world without him.