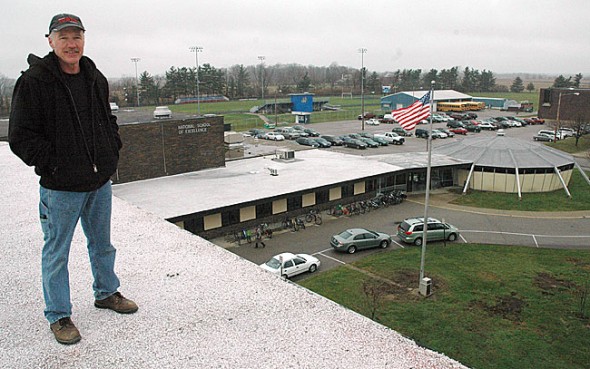 Craig Conrad, head of maintenance and custodial supervisor for the Yellow Springs School District, is retiring next month after 27 years with the district. (Photo by Lauren Heaton)

When educators build schools, they design for classrooms, not for storage and maintenance needs. So it’s no surprise that when Craig Conrad began his job as head of maintenance for Yellow Springs Schools in 1985, he found not only a lack of space for the school’s voluminous records, books and equipment, he also found no room for himself. But there were so many pressing maintenance and organizational needs at the time, that it took him 11 years before he finally set about making a proper office for himself. Since then, Conrad has kept the hoarders in check and maintained a vigilant command of the district’s spacial order.

From the moment he started, Conrad has loved his job, he said from that office in the basement of the school board building on Walnut Street. He seldom has the same day twice, and is kept busy with a spectrum of duties that range from repairing a pencil sharpener that fell off the wall to diagnosing a leak in the water lines, such as the one that occurred last week at Mills Lawn. He also loves kids, and helped coach baseball and announce for football games for about a decade during his tenure. But after 27 years with the district, Conrad, 55, decided it was time to retire to do other things. His last day with the district is January 27.

Conrad has overseen significant change for the district’s physical plant since he arrived. Around 1988, the middle school students were moved from Morgan Middle School to the new McKinney Middle School, which was later connected to the high school. Soon after, the two original train-car sized boilers at the high school were replaced with three boxes the size of home furnaces. In 2003 the high school grew by five classrooms, a fitness room and a teacher’s lounge, while Mills Lawn added four classrooms and a new gym. In 2006 he and others built a new bus barn at the high school. Many roofs, doors, windows, all the restrooms, the playing field press box, bleachers and ticket booth, and much more, have been replaced or upgraded under his watch.

And he’s learned a lot on the job, especially about how commercial maintenance is absolutely not like home maintenance, which he did for 10 years working as a plumber for local resident Joe Nickoson before coming to work for the schools. Kids are hard on equipment, he said.

“I learned fast that you can’t repair something here like you can at your house,” Conrad said. “If it takes two screws at home, you better put in 12 here, because they will find a way to tear it off the wall.”

Conrad would know. His family moved to Yellow Springs from Pennsylvania when he was in the fifth grade. He attended middle school at Bryan High and graduated YSHS in 1964, and he remembers vividly how things looked before he had them replaced. He knows, for example, that removing the scaffolding from the high school windows was a good idea not only because it served the birds better than the students, but because he remembers climbing on it for fun when he was in high school here.

That kind of historical context with the local schools is something the district will miss when Conrad leaves, Superintendent Mario Basora said at last month’s school board meeting.

“Craig has been a dedicated and wonderful caretaker of our grounds and facilities for such a long time. He’s very, very talented…a straight shooter…and he does a lot of things people don’t do,” Basora said, referring to his insistence on renovating the unique music facility at YSHS and working with students to build the new bus barn on the high school campus, an opportunity Conrad himself cited as one of the most rewarding of his career at Yellow Springs. He worked with day custodian David McManamay over several years and two students, Jonathan Haller and Lauren Anderson, over a summer to build the pole barn. Anderson, who started out not knowing how to use a hammer, by the end of the summer could take instructions like a “seasoned veteran” and go off and build her own structures.

“That was totally fun!” Conrad said.

While Conrad has overseen contractors’ work and has supervised seasonal grounds help and groups of student workers every summer, it wasn’t until five years ago when the district reduced its custodial staff that Conrad took on the additional post of custodial supervisor. Spending cutbacks over the past several years have forced the schools to do more with less, which has in turn forced Conrad to defer minor maintenance, which he has found frustrating.

When the district’s records storage space in the basement of the board of education building was nearly full, Conrad was tasked with moving it to a storage building at the high school campus. But as he was moving boxes, he realized the files dating back to the 1950s didn’t need to be moved, they needed to be thrown away. So he instigated a review of the records, had many pitched and turned the newly freed space into his office and a district meeting space. When he sees something that needs to be done, he does it. And to this day he maintains a vigilance against hoarders, to whom he offers a suggestion.

Conrad feels he’s been able to do most of what he wanted for the local schools.

“I’ve gotten a lot accomplished in 27 years,” he said, which is why he feels good about moving on. He has a lot he wants to do in his new life too. Having ventured to Egypt and the plains of Tanzania with his family last year, he wants to travel more. He also loves connecting to the wilderness on seasonal deer and elk hunting trips he takes with friends in West Virginia and Colorado. And the list of projects at home has already started to pile up. Conrad does plan to work again, but he hopes to simply enjoy the first couple of years living life on his own schedule, he said.