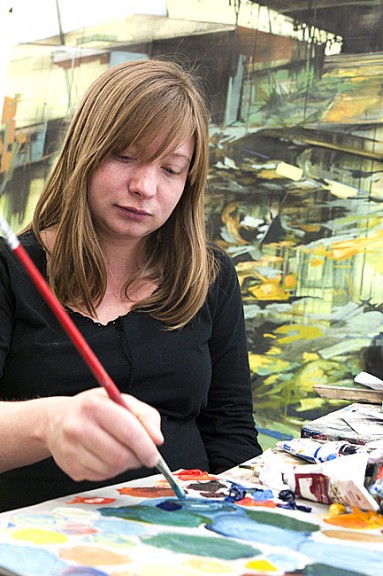 Monoprints by Yellow Springs native Laura Carpenter, who now lives in Colorado, are currently on exhibit at the Glen House. The exhibit is on display through January, with open hours Sundays, 2–4 p.m. Carpenter will give a talk on her work on Wednesday, Dec. 28, at 7:30 p.m. (Submitted Photo)

It’s been a number of years since visual artist Laura Carpenter left Yellow Springs. She and her husband, who both grew up here, have made their home in Colorado for more than a decade. A part of them remains here in spirit, though, and a current exhibit of Carpenter’s artwork at the Glen House Inn Bed and Breakfast is “very specific to Ohio.”

The show, a series of monotypes entitled “Through A Child’s Eyes: Art for Desmond,” will be on display through Jan. 22. Open gallery hours are on Sundays, 2–4 p.m. (except for Christmas and New Year’s Day). Carpenter will also travel to Yellow Springs for an open salon at Glen House on Dec. 28.

Carpenter left the village in 1998 to attend Goucher College in Maryland and has since studied art widely, in locales from Scotland to Vermont. She will receive a master of fine arts degree from Colorado State University in May. According to biographical information for the Glen House exhibit, her “current work explores the balance between real and abstract, natural and man-made and local and nonlocal color.”

She has shown pieces in venues like the Denver International Airport and the Denver Museum of Contemporary Art, and is currently represented by a gallery, Translations, in Denver.

Despite having moved, the couple still has strong ties to the village, which is a place “very dear” to them, said Carpenter in a recent phone interview. “We try to go back at least once a year,” she said.

It was a recent visit to the area with their infant son Desmond that inspired the Glen House installment.

“We came to Ohio in mid-August when he was just two months old and he was just fascinated by the trees,” she said. “We don’t really have that kind of [tree] coverage in Colorado…the Glen was just mesmerizing to him.” He seemed “calmed” by the foliage, particularly “at dusk, when the contrast was highest.” After returning to Colorado, Carpenter made a drawing based on the trees, which also captured Desmond’s attention.

When Luisa Bieri, a co-curator at Glen House and Carpenter’s classmate from Yellow Springs High School, asked Carpenter if she might like to exhibit there, she decided on a series based on her son’s “visual choices” in Ohio.

The 12 resulting works are abstract compositions whose varied palettes evoke the outdoors. Carpenter does not limit herself to brown and green when interpreting tree cover; one print, “Cottonwood Canopy 2,” is rendered in both muted and brilliant shades of blue.

In monoprinting, Carpenter explains in her artist’s statement, “a Plexiglas plate is painted on and then run through the press.” Since the artist gives up a certain measure of control in the process, “you’re sort of stuck with what you get,” she said. This does not diminish her enjoyment of the technique.

“I usually work really big in paint,” she said. By comparison, when she monoprints she works “fast” and that pace is “very freeing.”

Carpenter added oil pastel to some of the prints after they were pressed. Those are “probably more drawings than they are monoprints,” she added.

Some of the compositions “were just straight from my head,” she said. For others, “I took some pictures [in Colorado] of canopies in a nearby park…I often work from photos to learn about the objects.”

“If I had had all the time in the world, it might have taken me a week” to complete the pieces, she said. Instead, she spent approximately two months preparing them. “It’s piecemeal — that’s my experience now of being a mother.” Like new parents everywhere, she said, she is still making that “schedule adjustment.”

How has Desmond responded to the series? When Carpenter showed him one of the monotypes, “He was looking…he liked it, but I think he was kind of distracted by other things. He definitely was taking them in, but he didn’t jabber at it the way he jabbered at that little drawing” that inspired the exhibit, she said.

Still, she added, “I’m going to bring him [in December] and see what he thinks.”

Glen House is located at 1221 Glen Road in Yellow Springs, at the south edge of Grinnell Circle. Gallery viewings are free; The Glen House suggests a $10 donation to help cover expenses for the Dec. 28 salon, which will be held 6–9 p.m., with music from Ramon Bieri and Johnathan Stillwell, as well as wine and finger food. Prices for the works are available from Glen House. More information on the exhibit is available from Glen House’s Web site, http://www.GlenHouseArt.com and Carpenter’s Web site, http://www.lauraberchcarpenter.com .