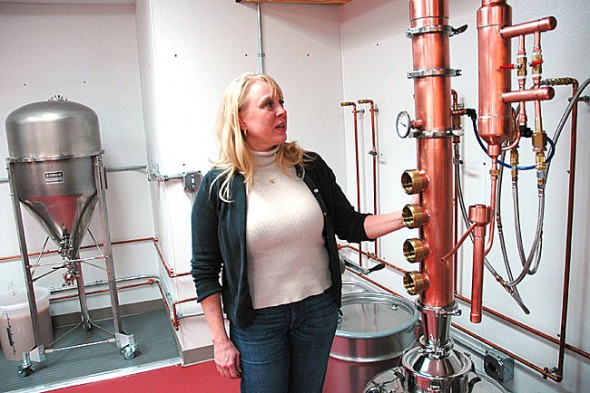 Meg Gujer of S and G Artisan Distillery showed off the new local company’s still in its MillWorks production space. Beginning in 2012, S and G will produce fruit schnapps and other liquors using authentic German methods and recipes under the brand, The Spirits of Yellow Springs. (Photo by Megan Bachman)

While sipping some authentic German pear schnapps during Christmas 2009, Meg and Steven Gujer of Sugar Creek Township had the idea to start a local craft distillery that made schnapps the traditional way. By the next December, the Gujers and Hajo Scheuner, who had brought them the schnapps from Germany, had rented a space in MillWorks in Yellow Springs. This holiday, they are celebrating their recent final permit approval from the state to distill handmade liquor.

The company, S and G Artisan Distillery, will begin producing and distributing its fruit-based schnapps and blended liquors under the brand name, S and G’s The Spirits of Yellow Springs, in 2012.

“We are just so grateful that the community has welcomed us with open arms,” said Meg Gujer last week from the company’s 1,000-square-foot space. Clearing the numerous federal and state hurdles to opening a distillery has taken time, patience, and a lot of paperwork, Gujer added, but the effort is coming to fruition.

“We’ve gone from the concept of a company to four little buckets on the floor,” Gujer said, pointing to the company’s early fermentation experiments with what is essentially moonshine.

The Spirits of Yellow Springs line will include pear, peach and berry schnapps made in the traditional style, that is, using real fruit. While many American schnapps are made by flavoring neutral spirits, S and G will process, pulp and ferment the fruit directly, turning its sugars into alcohol, which will then be distilled and aged so the flavors mellow and marry. The taste that results, Gujer said, is delicious. The company will also make a neutral spirit for blending and might move into the extracts business, with offerings such as vanilla extract or citrus extract.

After scouring the Dayton area for a small-enough space, S and G came up short, until the Greene County Department of Development directed the company to MillWorks. When Scheuner, a German national, walked into the renovated 1800s seed barn at the MillWorks complex, he said he felt like he was walking into his grandfather’s barn in Germany, which to this day has a still.

“This is what we were looking for,” Gujer said, adding that everyone from Ellen and Rod Hoover, who own MillWorks, to the Chamber Director Karen Wintrow to Village administrators Ed Amrhein and Sarah Wildman, were “extremely welcoming and helpful” to the young company.

Yellow Springs also is the perfect place for the business, Gujer said, because of its tourist draw and reputation. The goal is to grow by word-of-mouth along with marketing from Yellow Springs to Greene County and eventually the entire state.

“That’s why we chose Yellow Springs, because it’s a wonderful, close-knit community and it lends a certain marketability,” she said. With hopes of using seasonal fruit sourced from local farmers, the product could be exceptionally Yellow Springs.

“We could make Yellow Springs like the next Napa Valley,” Steven Gujer said.

The business is a part-time venture for Scheuner and Steven Gujer, both local manufacturers, and Meg Gujer, a government contractor. The team brings these skills to the endeavor too. Meg Gujer, who understands working under government scrutiny, led the challenging permitting efforts in a controlled liquor state. Steven Gujer, a toolmaker and Scheuner, a production manager, have extensive experience working on production lines. They also bring strong family distilling traditions. The Gujers found family recipes from Europe for distilled alcohols in Steven’s family history materials. And Scheuner has ancient family recipes dating back to the 1700s and distilling experience directly from Germany. With the help of a German mentor, Gujer and Scheuner are confident in their ability to make quality distilled products.

The next hurdle to clear is arranging distribution. Selling directly on site would subject the company to production limits, so S and G will instead sell to the state and to distributors with hopes of having the liquors eventually available in all 88 counties. The first step will be to arrange sales to local shops and restaurants.

“Alcohol is a funny business,” Meg Gujer said of the difficult sales restrictions before describing how the company might have local tastings and bottle-signing events even while the distribution happens more centrally.

A distillery requires light industrial zoning, as at MillWorks, even though the process produces no smoke and little waste, most of which will be composted. The actual distilling process, which S and G will complete in a 26-gallon still that takes four hours per batch, involves the self-contained management of vapor and temperature and, since it’s a closed system, is not dangerous, Gujer said.

The moonshine experiments will yield the first recipes for distilled beverages available to the public this spring. The first round of fruit-based schnapps could come in June or July. And by Christmas 2012, a glass of pear schnapps from The Spirits of Yellow Springs might be sipped at holiday parties around town.