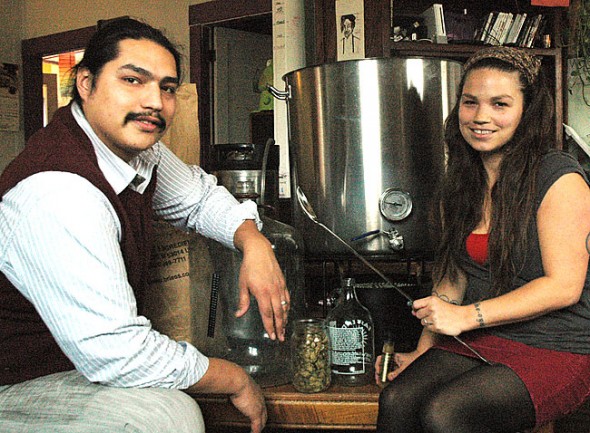 Shane and Jacqui Creepingbear have started the Vitruvian Brewing Company, a small microbrewery in the space formerly occupied by the Nonstop Liberal Arts Institute. They hope to to provide a locally-owned produced and bottled beer, with an initial production of about 600 gallons of various types each month. (Photo by Lauren Heaton)

A brew of perfect proportion

If there were such a thing as the perfect beer, the new Vitruvian Brewing Company would brew it. While local residents Shane and Jacqui Creepingbear haven’t finalized the recipe for their first signature micro beer, their aim is to create a brew so perfectly balanced in nutrient, aroma and flavor that it could be called a “canon of proportions,” like the Vitruvian Man. With the business incorporated and the new space at MillWorks ready for occupancy, the local couple is excited to open their kettles and start stirring up a hoppy storm.

The Vitruvian Brewing Company took occupancy of the 2,000-square-foot business space formerly occupied by the Nonstop Liberal Arts Institute on Jan. 1. The Creepingbears plan to spend the first several months remodeling the space to accommodate an initial 10-barrel production facility that will bottle and keg about 600 gallons of various types of beer each month. In a culture where 80 percent of the beer consumed is either manufactured overseas or owned by people who live overseas, the Creepingbears wanted to provide a locally owned and produced beer for area residents. Instead of cheap rice, they will use wheat grains and malts with local water. Unpasteurized and made from house-cultivated yeasts, the Vitruvian beers will retain a flavor unique to the area. And the couple hopes to reduce packaging materials by encouraging patrons to buy the beer in growlers, soda kegs and kegs and “filling station” they envision for the brewery.

Shane and Jacqui Creepingbear have been brewing not only beer but the idea to make and bottle beer for many years, since they met as students at Antioch College, where Jacqui was introduced to home brewing in an introduction to botany class. They were both struck by the marriage of science and art behind the brewing and experimented widely together to see how adding different grains and sugars in a controlled environment would affect the final product.

“I remember having this overwhelming satisfaction, like, oh my gosh, look what we did!” Shane Creepingbear said in an interview this week.

They travelled together, often finding little towns with their own microbreweries, including one in the Yukon Territory called the Yukon Brewing Company that featured great tasting beers with names like Aroma Borealis and Lead Dog IPA. They found the microbreweries to be a boon to the local communities and began to wonder why Yellow Springs didn’t have one of its own.

“We used to joke about why has this never been done in Yellow Springs, and at some point that changed to ‘Why aren’t we doing this?’ And then it became, ‘We should do this. We can do this!’” Shane Creepingbear said.

So with Jacqui working at the Sunrise Café, and Shane as the admissions counselor at Antioch College, with three young daughters Era, Hazel and Inez in tow, they began to craft a business plan. Especially after home brewing 80 gallons of beer for their wedding in 2008, they quickly learned that making beer, even on a small scale, requires vessels, big ones, to hold and transfer massive amounts of liquid.

The first step involves a 300-gallon tank where the grains are steeped, then moved to a brew kettle, where they are boiled with hops and malts. That product goes into one or more fermentation vessels where the sugar and yeast are added to make alcohol and carbon dioxide. At that point the beer will be either bottled or tapped to continue fermenting completely. To start, the 14-day brew cycle, to be located in the warehouse area of the MillWorks space, will be coordinated by the company’s first employee, a Dayton area master brewer who studied brewing at University of California Davis and was a shift brewer at the Pyramid Brewing Company in Berkeley. The Creepingbears plan to split the former Nonstop office area between the yeast cultivation rooms and the retail space, with a door and patio opening onto the bike path.

On tap to start will be two craft beers, a citra hop India pale ale and a crisp session beer, with much wider varieties to follow, including porters, stouts, seasonals and signature beers uniquely crafted for each of the different bars and restaurants in the village. The Creepingbears hope to involve a co-op student from the college, and they are happy to know that they have endless local supplies for flavorings and sweeteners such as lavender, honey, coffee and apples.

The whole endeavor is expected to cost an estimated $150,000. The couple plans to finance their venture through a combination of debt financing and local investors, many of whom have already expressed interest in backing the brewery.

Having a local brewery is good for a small community, the Creepingbears believe, especially because in case of an emergency power outage, the brewery would be the only place to boil safe drinking water on a large enough scale to serve the local population, Shane said.

Beer itself is one of the oldest beverages known to man. And instead of the large-scale industrial process that currently prevails, if local beer can be made responsibly with care, it would be a healthier and more enjoyable drink to share in good company.

“It’s like the whole white bread thing. Would you rather have fresh baked bread or the flat, industrialized thing you buy in plastic on the shelf?” Jacqui said.

Mark your calendars. Vitruvian Brewing Company expects to have its first official brew coming sometime in March, just in time for spring. Additional investors are welcome to contact the Creepingbears at vitruvian.brew@gmail.com.