BLOG – Darmok and Jalad at Tanagra

I know that I usually insert into my blogs at least one gratuitous photo of my kid. I promise I will not be doing that this time.

Instead, here’s a gratuitous video of my kid:

Now, on with the blogging.

Having long ago embraced my position in the world as a consummate nerd, several months ago I began the nightly ritual of watching Star Trek: The Next Generation on Netflix. For those not familiar with the show, it ran for seven seasons during the late ’80s and early ’90s, and featured a band of space roustabouts onboard the starship Enterprise, who get into all sorts of quandaries concerning interstellar physics, cultural relativism, philosophy of language, interspecies conflict, existentialism and alternate realities. Your basic week-night TV fare. Recently, I watched an episode where the crew encounter a ship full of aliens that speak in what seems to be elaborate gibberish; in the course of interaction, the captain of the alien ship intentionally strands both himself and the Enterprise’s Captain Picard on a nearby planet, where Picard struggles to try and understand as the alien captain repeats several phrases ad nauseum, especially this one: “Darmok and Jalad at Tanagra!”

At this point, no doubt, you’re thinking, “When is she going to quit talking space nonsense and get to the point?” I’m not entirely sure myself, but bear with me.

My daughter Lucy has just started talking. I guess “talking” is probably stretching it a little; she’s saying some words, and sometimes they mean something very specific, and sometimes they don’t mean anything. From what I can tell, for example, she uses the word “crackers” to mean anything from cereal to bread to pasta to bananas to whatever is on my plate that she’s trying to get. “Crackers” can also mean crackers. At this stage in the game, her verbal interaction with me is essentially comprised of attempting to communicate her desires. And since her nouns are limited, as evidenced by the above video, there’s also a lot of pointing and gesturing that goes on from both of us. When that fails, it becomes a guessing game: me trying to guess what she wants, and her trying to guess whether or not I’m an idiot. She babbles, throws in a few instances of “What’s that?” now and again to let me know that she’s curious, or maybe just to shake things up. I monologue to her about how she needs to stay out of the closet and stop hiding stuff in our shoes, while she walks blithely out of the room saying, “See ya!” Both of us have a lot to say, but most of it is interpreted by the listener as meaningless.

It can be frustrating to live in the same house with somebody you can’t understand. It can also be humorous, and it can be useful. It can even be comforting; occasionally, Lucy will sit in my lap, and we just kind of stare at one another. I know for a fact that, once her facility with language improves, once we’re finally able to say things to one another and be understood, we won’t be able to go back to not saying things. As in the case of the original archetypes, good ol’ Adam and Eve, our eyes will be opened; silence will be strange, awkward.

But until that day comes, it means everybody in the house is constantly learning. We’re all being forced out of ourselves and into the position of trying to really get somebody else. It’s the same thing that happened when I first moved to Yellow Springs; my conservative, southern upbringing meant I didn’t speak the language of this town for quite some time. Having spent a few years thrown into the thick of it, however, I know that, while I may never be fluent, I’m starting to pick up on some of the more subtle nuances.

Getting back to Star Trek: Captain Picard and the alien captain are forced, despite their inability to communicate, to fight a weird electrified monster together. This shared trauma causes a breakthrough in the language barrier: Picard discovers that the alien and his race communicate by way of metaphor. The aliens refer to scenes from their own mythology to convey feelings, impressions and ideas. For example, the phrase the alien captain repeats, “Darmok and Jalad at Tanagra,” refers to mythical heroes Darmok and Jalad, a pair at odds who are stranded together on the island of Tanagra, and must learn to work together to conquer the beast that lives there. The pair leave the island together as friends. 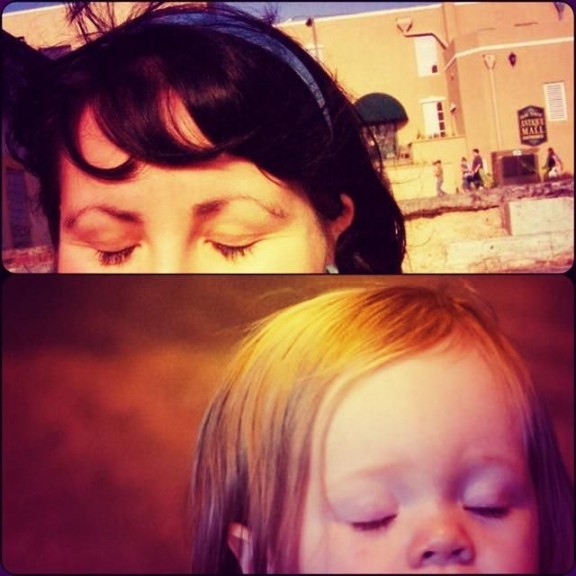 What's going on inside that head? (Photos by Lauren Shows and Hung Nguyen)

I won’t go into the very obvious linguistic problems the preceding tale presents, but I will say I very much appreciate the story. As a writer, I myself take great pains to make a metaphor out of everything. Here comes a very obvious one now: basically, nobody understands anybody, not really. We’re all thrown together and expected to figure out what’s going on in somebody else’s head, just by the words that they employ. It isn’t until you really need to understand or be understood that you realize that words are paltry tools. Lucy can tell me she wants a cup. Soon, she’ll even be able to tell me what she wants in the cup, and even make specific suggestions as to the nature of the cup, whether it be size, shape, material or color. But she’ll never really be able to tell me why she likes a blue cup more than a pink cup, what it is about that particular hue that resonates with her, that is pleasing to her, that calms her. That particular significance will belong to her and only her, forever. And that’s alright; for now, the two of us are enjoying being thrown together, she discovering that the word “no” appears to lose its meaning if I have to say it more than once, and me hoping that one day she’ll be able to tell me why she finds pooping in the bathtub so exhilirating. Darmok and Jalad at Tanagra.