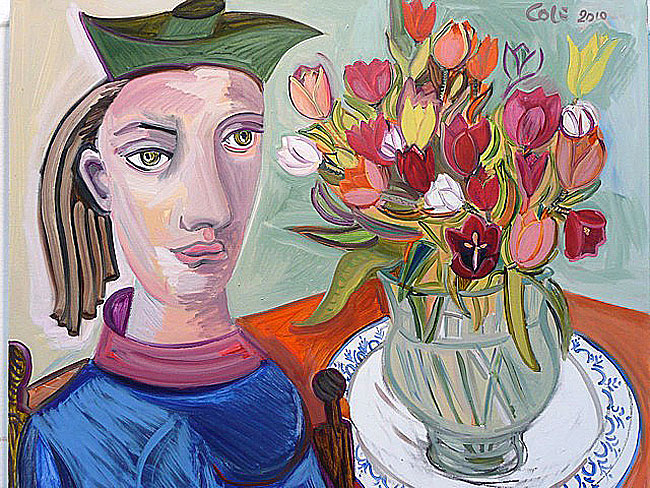 Painter Patricia Cole of Bloomington, Ind., will be the artist-in-residence at Antioch College until mid-February. This Sunday, Feb. 22, she will give a talk on her work from 3–5 at the Herndon Gallery.

Cole’s work will be on display at the Glen House gallery from Jan. 29 to Feb. 19, and she will also speak at a Glen House reception for her work on Sunday, Feb. 12 from 1–4. Cole will also hold a free drawing workshop on the investigation of identity on Sunday, Feb. 5, from 2–5 p.m. at the YS Kids Playhouse on the Antioch College campus.

A painter for more than four decades, Cole most recently traveled to South Africa to serve as an artist-in-residence at the University of Johannesburg. She received a 2001 Carnegie Prize for painting from the National Academy of Design in New York City, as well as grants from the Indiana Arts Commission. She has also taught art at the Heron School in Indianapolis.

Cole’s work has been described as “neo-expressionist” and she counts as influences Picasso, Russian painter Chaim Soutine and American Joan Brown. Her subjects vary greatly, from still lifes to explorations of war and death, but all ultimately come from her own emotions, Cole said in an interviews.

“No wonder what I’m painting, I’m painting myself,” she said. “It could be flowers, or a portrait of another person. But it’s important to me to recognize that.”

For a longer article on Cole, see the Jan. 19 Yellow Springs News.