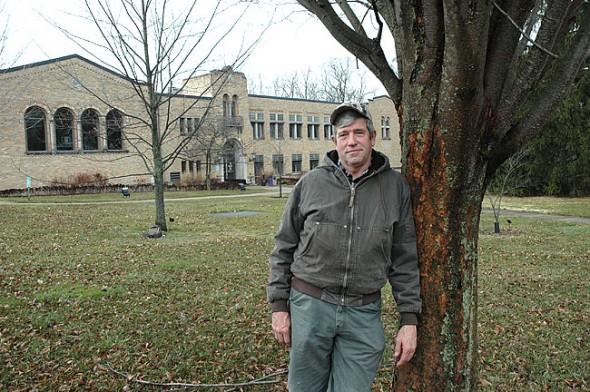 After 19 years with the Village, Dave Conley retired in December as the superintendent of streets and wastewater collection. (Photo by Lauren Heaton)

By the time he came to work as a Village crewman 19 years ago, Dave Conley was already a veteran of infrastructure maintenance. Having first operated a bulldozer at the age of 10, Conley has spent his working life digging ditches, climbing poles, setting electric lines and fixing equipment. And a week after he retired from the Village in December, he went right back to another physical job at Tagnetics, an electronic pricing installer based in Xenia.

“Just about everything you can do, I’ve done at the Village, and I’ve enjoyed all of it,” Conley said during an interview earlier this month. “I’ve liked that kind of work all my life.”

Conley grew up helping his father, the first David Conley, who operated an excavating and concrete business, Conley Brothers Incorporated, from the family farm in Pitchin. His first job at the age of 12 was installing the septic system for a housing development in Springfield. He worked with his dad until one year after high school, when demand slowed, and he had to find work elsewhere.

Conley and his dad were very close and spent a lot of time together hunting, fishing and, most of all, working really hard.

“He worked a lot from daylight ‘till dark, six, seven days a week, depending on the job,” he said. “I’ve looked up to my dad all my life, and I thought what he did was the best thing in the world.”

So even when he had to leave the family business for a period, Conley stayed in the field, working first for Ohio Edison as a class A lineman, climbing 90-foot poles with toe hooks and a belt to service electric lines throughout the Springfield region. Edison also serviced underground lines, and Conley sometimes found himself in holes 23 feet deep under conditions many found uncomfortable, but which for him just made the job more interesting.

After 11 years with Edison, Conley was laid off and again went to work for his dad. Then one muddy spring day when they were setting water taps for another development, then-Village Manager David Heckler asked him to interview for a Village position.

“I told him I can come in on my lunch hour, but I’m not going to look very good,” Conley recalled. He was hired that week.

Camaraderie with the local crew started three days into the job, when a tornado hit Arcanum and Conley joined Mike Applin and Kelley Fox to offer several days of intense mutual aide.

“That was my break-in for going to work here,” he said.

He got a more personal one exactly five years later later when a cable detached from the Digger Derrick truck, sending an electric pole tumbling down on his leg. He was taken by Care Flight to Miami Valley Hospital, where he spent nine days and was told he might not work for two years.

Six months later he returned to the job on light duty, which included a summer spent repainting the over 200 fire hydrants in the village. Soon he was back to regular duty repairing and replacing water and sewer lines, and maintaining the streets, sidwalks and Village structures such as the pool and the library. He liked doing even the “nasty stuff,” such as fixing a water main break in the dead of the night at negative 30 degrees.

“Some people would hate that stuff, but I enjoyed it,” he said with a bemused grin. “I felt like it was something of a service we were providing for a lot of people, and I just enjoyed doing it.”

Conley had planned to retire within the next several years, but in October 2010 he was diagnosed with colon cancer. He spent a year undergoing surgery and chemotherapy and achieved remission this past September. He decided then that it was time to live life on his own schedule.

In his retirement, Conley still works hard for Tagnetics, an industry leader that sends pricing installation crews across the country to work the night shift for several days or weeks at a time. But now Conley gets to decide which jobs he wants to work, and which he can combine with the semi-professional archery tournaments he enters with support from his sponsor, Rick Rust of D&R Enterprises, a bow dealer in Springfield. Conley has been ranked in the top 10 archers in the nation several times, and when he isn’t competing, he likes to hunt deer, elk and antelope.

Conley may stay busy, but he will remember fondly his time with the Village, as well as the dedicated crew members he served with.

“The crew here has done a superb job keeping the electric and water running through some pretty awful conditions,” he said. “That’s our job — service. The guys we have here, they’re pretty dedicated.”