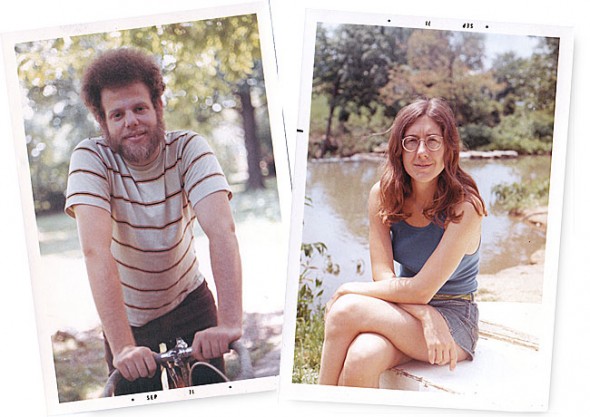 At its best, Antioch College is a place where students learn by doing to make positive change, and that was never more the case than for alumni Julia Reichert and Jim Klein. As students in the late 1960s, the two made a feature film about the experience of being female that both rode the modern wave of the feminist movement, and, they believed, helped root the feminist cause in the American consciousness at the time. That is among the reasons the film, Growing Up Female, was chosen last month for inclusion in the Library of Congress’s National Film Registry, an honor it shares with 574 other American films.

Growing Up Female is notable in many ways, not the least of which is the age and relative inexperience of the filmmakers, who were 20 and 22 when they finished it in 1970. Its timing and relevance to the political climate ensured a receptive audience and generated a symbiosis between the work and the feminist movement, each fueling and being fueled by the other. And because in order to make a political impact, the film had to be distributed, the filmmakers are coincidentally this year celebrating the 40th anniversary of the distribution cooperative, New Day Films, that they created to launch their film.

When Reichert came up with the idea for the film as her senior project, neither Reichert nor Klein considered him or herself a filmmaker. At Antioch, Reichert was part of a nascent women’s consciousness raising group, and she was looking for a way to connect with other women and share their common experience.

“We never said we were filmmakers then. We were activists who wanted to change the world,” Reichert said in an interview in January. “We wanted to use photos, radio and film to expose truths, raise awareness and get people to take a step, get people to make a difference.”

Now, 40 years later, what stands out most for both filmmakers is the credit due the college for giving them the space to make a project completely on their terms, they said in an interview last week.

“So much of it had to do with the fact that we were at Antioch — that the film got made at all and got out,” Reichert said.

“Antioch College should be so proud — it would never have been made anywhere else,” Klein added.

The filmmakers will screen Growing Up Female at Little Art Theatre on Sunday, Feb. 12, at 4 p.m. They will be joined by local resident Judy Rose, one of the Yellow Springs women featured in the film. The screening will also include “Up Against the Wall, Miss America,” an experimental documentary made around the same time about the 1968 beauty pageant and protest.

Growing Up Female, the first feature length film of the women’s movement, looks at the lives of six girls and women and the institutional forces that shape them. The film was shot in the area, much of it in Yellow Springs, and includes scenes at the Community Children’s Center, Vernay Laboratories, Dewine’s Pond, Earth Rose and footage of downtown Xenia before the 1975 tornado. One of the teachers interviewed in the film is from Mills Lawn Elementary, two of the residents interviewed worked at Vernay, and local resident Judy Rose, then Judy Russell, is the stay-at-home mother featured in the film.

Though Reichert and Klein wrote and strategized for several months before the shooting, all the footage was shot in 10 days on a 10-millimeter sync-sound camera by a University of Cincinnati film student who had access to equipment. Reichert and Klein then split the editing time equally (a job that would typically have been left to the man at that time), because they wanted to live their belief that “the personal is political.” The 50-minute film is edited at a 2:1 ratio, meaning that the film includes one minute of film for every two minutes of footage (most films have a much larger shooting ratio).

Having deliberately chosen to make a film about “ordinary” women, the filmmakers were pleased that the film got the attention of some of the “famous” women they could have interviewed instead. Writer and activist Susan Sontag wrote of Growing Up Female, “It’s one of those painful experiences that’s good for you…I wish every high school kid in America could see this film.” According to Gloria Steinem, the film is “A true and piercing look at American womanhood.” They weren’t the only admirers of the work.

Each year since 1989, the Library of Congress has chosen 25 films that are “culturally, historically or aesthetically” significant for the national registry. That Growing Up Female now shares a spot next to classic films such as Citizen Kane, The Wizard of Oz, and 2001: A Space Odyssey, was rather shocking at first for Reichert and Klein. They recently saw a film documenting the films on the registry, including theirs.

“I was literally shaking,” Klein said. “There were all these great American films, and then there’s Growing Up Female…and it was like, how did they select our film?!”

But actually, while the registry does hit the big names, its mission is also breadth, meaning that it includes more obscure documentaries such as Garlic Is As Good As Ten Mothers, a 1980 film about the ‘stinking rose,’ 1937 newsreel footage about the Hindenburg disaster, and newly selected this year, A Cure for Pokeritis.

And popularity is a measure of quality that the film registry board apparently takes into consideration, the filmmakers said. When they learned that the Women in Film and Video organization in Washington, D.C. had been trying to get their film on the registry for several years, “they activated their people, we activated our people” in a letter writing campaign recommending its selection. In December, a Washington Post article naming the 2011 selections said that two of the films had received a notably high number of letters, which were Forrest Gump and Growing Up Female.

That so many people are familiar with the film is also a product of the Antioch grassroots spirit. When the film was finally completed, the filmmakers were tasked with the most important part of the project: its promulgation. So Reichert picked up the only copy of the film and trekked it in person from Cleveland to Pittsburgh, D.C., New York and Boston, hitting YMCA’s and women’s centers and raising enough money at each stop to get to the next city.

But in order to get the film out to a wider audience, the filmmakers decided to submit it to a New York City distributor, who rejected it. That fate, they now believe, “was the best thing that could have happened.” A little later, when they were approached by Growth Press, a commercial educational film distributor, which promised to make their publicity task a lot simpler if they signed over the rights to the work, they declined. The point of the film, they discovered, was to spur discussion among women through a film about other women. It was a grass-roots effort, not to be co-opted or worse, altered or reframed by a commercial outlet, likely run by men.

“So we had to learn how to do it our own way,” Reichert said.

Klein taught himself how to use the college’s offset press to print posters and promotional material, and then, gathering the mailing lists of all the schools and organizations Reichert had visited on her trips East (and purchasing additional lists as well), they held a stuffing party at Antioch, advertising the film’s availability to as many places they could imagine might be interested. And the orders came, slowly at first, and eventually ratcheting up so high they had to make 30 copies of the film to serve the demand. It was the birth of their cooperative, New Day Films, named after the pictorial signature of a rising sun by their Antioch film teacher David Brooks. The film collective, which currently includes about 100 filmmakers who have produced over 200 films, has continued to support the kinds of films that engage audiences in the social issues of the times.

Growing Up Female launched Klein and Reichert into lives as filmmakers. Together, the two went on to make two Oscar-nominated documentaries, Union Maids and Seeing Red. Separately, they have continued to win awards, including an Emmy for A Lion in the House by Reichert and Steven Bognar.

And it all began at Antioch College.

One Response to “Feminist film gets national honor”