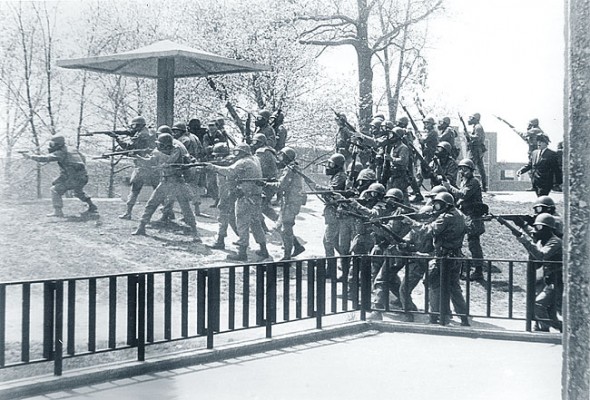 Letter to the Next Generation, a 1990 documentary by local filmmaker Jim Klein, will be shown tonight, Wednesday, Feb. 29, at 7:30 p.m. at the Glen Helen building. The film, which takes place at Kent State University, examines the effect of the 1970 Kent State killings on the next generation of college students.

Letter to the Next Generation, a documentary by local filmmaker Jim Klein, will be shown this evening, Feb. 29, at 7:30 p.m. at the Glen Helen building. Sponsored by Antioch College, the film is open to the public.

Made in 1990 and dedicated to Klein’s daughter, Lela, Letter to the Next Generation is an exploration of the impact of the 1970 Kent State shootings during which National Guardsmen fired into a crowd of students, killing four of them. For the film, Klein traveled back to Kent State 20 years after the shooting to talk with students and faculty about how the event affected them, and the forces that had shaped their own generation, including the Reagan presidency and the taking of American hostages by Iran.

The film is 75 minutes long.