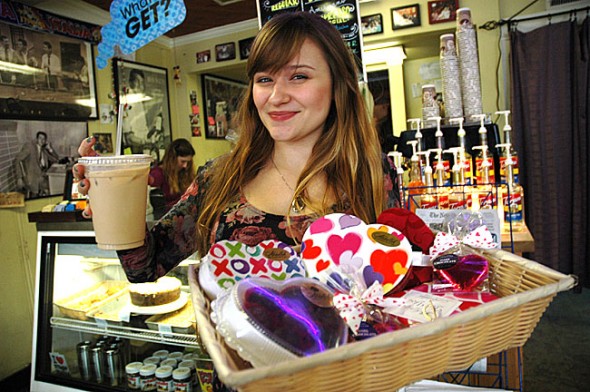 Megan Miller showed off some of the chocolately possibilities of the upcoming “Tour de Chocolat,” on Saturday, Feb. 11 from 1 to 5 p.m. Twenty-three downtown businesses are offering chocolate items on their menu. The chocolate crawl is part of the first Yellow Springs Love-In, Feb. 10–12, featuring music, peace and activism. Miller, who is helping to organize the event as an Antioch College Miller Fellow with the Yellow Springs Arts Council, here holds some handmade chocolates from Town Drug and a bianca white chocolate latte from Dino’s Cappucinos. (Photo by Megan Bachman)

Rather than fight it, the Yellow Springs Experience is embracing the village’s hippie image with a weekend “Love-In” modeled after happenings in the late 1960s centered on music, peace and activism.

With ties to the 1967 Human “Be-In” in San Francisco’s Golden Gate Park and John Lennon and Yoko Ono’s 1969 “Bed-In,” the Love-In is still very Yellow Springs, according to organizers Joanne Caputo and Megan Miller of the Arts Council.

“We’re bringing back the love-in but with Yellow Springs’ meaning,” said Caputo. Fittingly, the idea for a love-in came to Caputo during a meditation in December. It wasn’t long before the Yellow Springs Experience — a collaboration of local arts groups, non-profits and businesses always looking for new ways to bring tourists to town to shop, learn and recreate — came on board.

On the Valentine’s Day theme, 23 downtown shops are taking part in the “Tour de Chocolat” on Saturday from 1 to 5 p.m. Shoppers can pick up free samples, sale items or special offerings of chocolate and cocoa-laced products at participating businesses, which will hang a heart in their window. Dino’s will brew a new mocha drink; La Llama Place will have Peruvian chocolates on hand; a chocolate stout will be on tap at Peach’s and Current Cuisine will bake chicken mole enchiladas.

There will be many “date opportunities” for couples to celebrate that holiday weekend. Parents can drop off their kids at a valentine-making craft night at the Yellow Springs High School cafeteria, on Friday from 6:30 to 9 p.m. before venturing out on the town kid-free. One place they could head is the Spirited Goat Café for an Espresso Date Night with dessert and coffee, from 7 to 9 p.m. For health-conscious pairs, couples workshops on Thai-Yoga massage on Saturday from 1 to 4 p.m. at Inner Light Yoga and Wellness and yoga at Yoga Springs Studio on Sunday from 3 to 6 p.m. are being offered.

Married couples can renew their wedding vows at a fireside ceremony at Ye Olde Trail Tavern on Saturday at 11 a.m. Jannirose Fennimore will officiate. The first 20 couples to reserve their $20 spot will get champagne for the toast, a copy of a group photo and an optional Valentine’s lunch at the Tavern.

And because gay couples can’t get married in Ohio, Caputo wanted to organize a talk on the status of same-sex marriage in the state. Ed Mullen, the executive director of Equality Ohio, will speak to the issue on Sunday at 1 p.m. at the Emporium.

Throw backs to the Love-In’s 1960s predecessors are sprinkled throughout the event, especially the music, peace and activism. While Jefferson Airplane and the Grateful Dead performed at San Francisco’s Be-In, the Yellow Springs Love-In will have its own, a sampling of 1960s and 1970s music — “the best music there ever was,” in Caputo’s words.

Peach’s Grill is hosting a ’60s and ’70s music dance party, on Friday from 5 to 7 p.m., along with its regular Friday and Saturday night shows. The local rock ‘n’ roll revival band “The Hoppers” will play at the Emporium’s Friday night Wine Tasting — with covers such as “Double Shot (of My Baby’s Love)” by the Swingin’ Medallions.

To involve and appeal to the youth — who played a big part in 1960s counterculture events — the Experience enlisted a group of Antioch College students for a rocking musical performance and jam session at the Glen Helen Building Auditorium on Saturday from 7 to 9 p.m.

According to Antioch College student and event organizer Megan Miller, a “good chunk” of the college’s 34 students, along with some teachers, will bring their guitars, keyboards and other instruments (someone found a cowbell, Miller reported). And because several students happen to have Star Wars costumes (including a Wookie suit and Han Solo pants), the students may perform as the “Star Wars Troubadours,” or some similar name, Miller said.

Harkening back to John and Yoko’s honeymoon Bed-In to promote world peace, there will be a variety of peace-themed activities during the Love-In. While John and Yoko sang “Give Peace a Chance” from bed, the village’s peace activists take to the streets weekly with signs and chants against wars abroad, economic inequality and more. Their demonstration, always open to any peace-loving person, will take place Saturday from noon to 1 p.m.

John and Yoko will make an appearance at the Love-In too, in the form of two re-enactors. The “John and Yoko” memorial Love-In will be staged in the second floor above The Winds Cafe on Sunday from 3 to 5 p.m. Also during that time and place, peaceniks are invited to speak at an open mic on peace and love. Scheduled speakers include a representative from the Yellow Springs Quaker Meeting and the Dayton Peace Museum.

Environmental activists can love the earth by gathering at the Eco-Mental store on Sunday at 11 a.m. to sign a petition urging Ohio Gov. John Kasich to put a moratorium on fracking, a controversial drilling technique used in natural gas extraction.

In the spirit of love, Village Artisans is hosting a “Mysteries of the Heart,” art show with 30 artists who created works in various media to complete the phrase, “The heart is…” The show runs through Feb. 24 with an artist reception on Friday, Feb. 10, from 6 to 9 p.m.

Dress is “nothing near formal wear,” Caputo said. Blue jeans and bellbottoms are part of the dress code, while tie-dyed T-shirts and flowers in your hair are optional, according to a brochure. And when Love-In participants have “been there and done that,” they can buy the T-shirt. Basho will be screen-printing A Love-In commemorative T-shirt on Friday and Saturday and selling it for just $10.

The whole event is sealed with a kiss or, more precisely, “The Kiss,” a public performance piece first organized by the Jafa Girls in 2008. They’re hoping to get 80 couples to kiss at 3:27 p.m. on Saturday at one of 80 kissing stations throughout town (designated by a pair of large red lips). Those participating should arrive at the First Presbyterian Church at 2:45 p.m. to get assigned to a kissing station and can kiss whomever, or whatever, they want, including mates, animals, teddy bears, their children or anything else, according to Caputo.

Though villagers might be tempted to have their own “Love-In” in bed on Valentine’s Day weekend, Caputo encouraged them to venture out for a few activities. And she hopes the event will draw from the region both “the hippies” and “the hip” to Yellow Springs, which, to her, always felt like the “Haight Ashbury of Ohio,” she said.