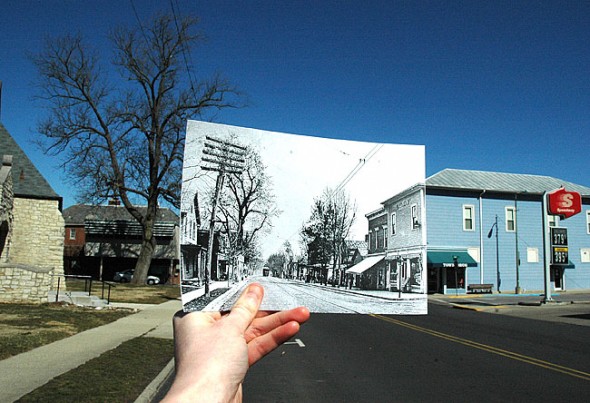 The Yellow Springs downtown of the early 1900s is superimposed on the Yellow Springs of today. In the same way, the village’s past comes alive on the Web pages of local history blogs started in recent years. The historical photo (c.1910) was taken from approximately the same location looking north on Xenia Avenue 100 years ago. Visible are the traction line, built in 1902, the Independent Order of the Odd Fellows building and new cement sidewalks. Visit ysnews.com for more photos in the “Past and Present” series. (Historical photo courtesy of Antiochiana, Antioch College; photo by Megan Bachman)

Present gives voices to village past

What if Judge William Mills had a Facebook page, Horace Mann tweeted or Wheeling Gaunt blogged? Yellow Springs’ founders and early settlers didn’t have Internet — they probably couldn’t have imagined it — but later generations are now using it to imagine the lives of former villagers.

Three local history blogs have sprung up on the World Wide Web in recent years to share old photos, early maps, first-person accounts, and stories of olden times in the village. The blogs are another way for Yellow Springers to reflect upon their town’s past, the importance of which is clear to Scott Sanders, archivist and blogger for Antiochiana, which collects history on Antioch College and the village.

“We have to know where we came from,” Sanders said. “Any form of understanding of that helps you know where you are, and where to go.”

But the blogs are more than a repository of historical collections and research — they aim for submissions and conversation from the community.

“History is never complete because so much has been destroyed,” explained Becky Eschliman, who runs the Yellow Springs Historical Society’s blog. She likens the process of gathering history to putting together a jigsaw puzzle. And when people add their puzzle pieces, “it changes the pattern,” Eschliman said.

Resident Robin Heise also hopes to use her blog, originally created for a graduate school project, to gather the stories of villagers.

“I know a lot of the folks are getting older, their stories are not being recorded,” Heise said. “It’s important to get their stories while we can.”

Something in the water

As a board member of the Yellow Springs Historical Society, Eschliman started the blog, There’s Something In the Water, (blog.yshistory.org), last August. There the native Yellow Springer posts curious tidbits of village history — photos of places that no longer exist, minutes from early Library Association meetings, Antioch Company bookplates, pages from Ernest Morgan’s 1959 book, An Adventuring Community, and more.

The blog offers a new way for the historical society to share its collection, which is currently in storage for lack of a dedicated exhibit or research space, and an opportunity for others to add what they know about village history, she said.

Antioch Company bookplates have so far been a major feature of the blog. A 24-year employee of the Antioch Company, Eschliman one day at work stumbled upon dusty pallets filled with dusty boxes destined for the dump. The boxes were filled with correspondences between bookplate artists, sales reps and clients. She ended up saving three rooms worth of company memorabilia, including printing plates, bookplate product samples, letters, newsletters and more, and donated them to the society. There’s value in the collection, Eschliman said, because the Antioch Company is “one of the key businesses of early Yellow Springs,” and the bookplates are an “art gallery of sorts.”

The bookplate collection includes more than 1,000 bookplate designs spanning 78 years, from art deco social justice-themed designs by Lynd Ward to local artist Robert Whitmore’s fanciful scenes. Private bookplates are particularly interesting to Eschliman. Among the collection are a memorial bookplate for a child and some “weird” designs for a hypnotherapist, Eschliman said.

Those interested in socialism would find Antioch Company founder Ernest Morgan’s board letter correspondence and newsletters of value, since he ran the company with a “blend of socialism and capitalism,” Eschliman said. And there are times when “national history jumps out at you,” she said. In one newsletter Morgan wrote of bailing out from jail a husband-wife sales team who were traveling in the South. They had been arrested because of their racially mixed marriage.

As is often the case in historical research, mysteries arise. In the historical society’s collection, Eschliman found, and posted, a program for a “New Citizen’s Day” dinner held in 1941 and wondered if it might be for new village residents or foreign immigrants. Based upon the similar birthdays of those listed in attendance, Eschliman figured out that “new citizens” was meant quite literally; it was likely organized for those who recently registered to vote. This tidbit says a lot about the community, Eschliman said.

“What a way to underline how important voting is,” she said.

Eschliman plans to put together and post a database detailing the occupancy of downtown buildings throughout the years and hopes to foment more discussion at her site. And the blog might generate more interest in the Yellow Springs Historical Society, which is currently looking for a permanent exhibit and research space.

Songs from the stacks

In its 107 years, Antiochiana has grown from a dedicated shelf at the Antioch library to a department with a full-time archivist and an online blog. Sanders, the college’s fourth archivist, launched Songs From the Stacks (antiochcollege.org/antiochiana) soon after the keys were transferred to an independent Antioch College. Sanders was the college’s first new hire and tasked with contributing to a semi-monthly e-newsletter on the college’s rebirth.

The early dispatches covered the state of Antiochiana, which was rebuilding after Antioch’s decline and closure. For years submissions to the collection had dwindled, and when the college closed, Sanders had to fight off people who wanted their memorabilia back. Soon Sanders began mining the 150 years of material collected on both the college and village (Antiochiana was the depository for much town history before the Yellow Springs Historical Society began collecting again).

Sanders posts primary sources on the blog (letters, memos, speeches, eulogies, unadulterated accounts, etc.) along with a short introduction for context. He’s uploaded an early Horace Mann speech, Antioch library committee minutes from 1852, a letter from Lucy Morgan to her husband, Arthur, after first meeting Hugh Taylor Birch, an address by trustee Charles Kettering, an 1864 journal entry from Cornelia “Nellie” Van Mater revealing of feminine culture at the time, phrenology character studies from the 1850s and much more.

The blog’s name riffs on a 1965 album produced at the college called, “Songs from the Stoop,” (the stoop in front of the student union, that is). The collection of folk songs includes such ditties as “Antioch Blues,” “Green Go the Freshmen,” “When I First Came to Antioch,” and “We’re Liberal.” Sanders said he hopes to soon stream the album digitally from his site.

In other multi-media plans, Sanders would like to post audio files of a Rod Serling presentation and of Arthur Morgan talking about the Glen Helen Nature Preserve. And he is excited to share a 20-minute film made by Antioch students in the 1940s called “Campus Frontiers,” covering Antioch College’s involvement in World War II.

Yellow Springs Heritage (ysheritage.org) documents Heise’s yearlong research into a dozen historic structures in the village as part of her public history master’s degree at Wright State University. Heise, a seven-year resident, was initially interested in studying the structures alone. But she soon became fascinated by the lives of the villagers who dwelled within.

“As I progressed I started getting interested in the people,” Heise said. “Names started popping up and intriguing me. I’m addicted to it now.”

One of those names was Colonel M. Thomas Tchou (1895–1965). A Chinese immigrant, he lived in an 1858 gothic-inspired house on Walnut Street during the 1950s. Heise found his tombstone at Glen Forest Cemetery with the inscription “Engineer-Artist; Founder of the World Citizen Movement.” A PhD student from Hong Kong found her post and contacted her with more information. Tchou was also one of China’s foremost painters, was the executive secretary of the industrial department of the YMCA in China and worked to improve labor conditions and advocate for the working class in China, Europe and the U.S.

Heise also studied the Hamilton/Carr House, the Barr House, the Octagon House, Mills Lawn and a house on Elm Street. Her professors gave her an A on the project.

But Heise’s work continues. She will soon post the results of new research into additional properties and share a step-by-step guide to conducting property research.

When a descendant of the local Funderburg family stumbled upon Heise’s blog and started sending her information about an old family quilt, Heise got an idea. She could create an interactive element at the site for villagers to share family history, photographs and stories. At a presentation last month of her property research, Heise was astonished at how many villagers had a “need to share” what they knew about the properties, and at the interest in local history in general. With her re-vamped Web site, launching in a few months, anyone in the world can share their Yellow Springs lore.

Heise initially embarked on the research to uncover how such a unique town came to be, she said. She found “cutting edge” people, including advocates at a national level and minorities, especially African Americans and women, who played major roles in history.

“I expected that the early ancestors were like other towns, but they weren’t,” Heise said. “They were unique. You can see a direct link between who we are and the founders.”

Sanders said Antioch College has been “the most distinctive contributing characteristic” of the village over time, but that there are other reasons why Yellow Springs became what it is. There’s the relatively early acquisition of a railroad, in 1845, the real estate boom from the abundance of limestone, originally exported for fertilizer and concrete production, and the hotel resort, on account of the “magical” Yellow Spring.

Eschliman agrees that the town’s medicinal spring might be a factor, citing a fantasy writer who lived here and was inspired to use the concept of a “spiritual force in the countryside,” in one of her stories. For whatever reason, idealists have always been drawn to the village, Eschliman said.

“There’s something cyclical to idealists here — from the Owenites to the free love spa people to the Vale,” Eschliman said. “Every so often they come, and they’re not connected.”