BLOG—The gulf between a Twinkie and a cherry blossom

Someone who really loved cake once had a brilliant, if unhealthy, idea. Instant cakes, of different flavors, individually wrapped so no one could ever get too small of a piece. Meet Hostess, maker of Twinkies since 1930.

Just for the record, Twinkies don’t count as real food. While they might once have contained some less adulterated form of ground wheat, sugar and oil, I challenge any of the folks who make the stuff every day to read the list of ingredients without squinting or sounding out the seven syllable chemicals. And if the bowel dysfunction that results from eating one of the suckers isn’t telling, its 10-year+ shelf-life should give pause to even the most loyal defenders.

But surely the timeless charm of the little bullet cake could justify suspension of further judgment. Purely based on taste and nostalgia, Twinkies are a winner. And all winners want company, especially bad company, as in, “as long as we’re in a sinful mood, we might as well deep fry it!” At least that’s what they said in Macon, Ga., at last week’s cherry blossom festival.

What, you might ask, do cherry blossoms and Twinkies have in common? Yoshino cherry blossoms, those delicate, cloud-like blooms with the faintest dusting of pink known to represent the ephemeral nature of life. Cherry blossoms, a sacred gift of friendship brought from the Japanese to the people of the United States in the early 1900s and again after the war between the two nations. The two are like polar opposites, and yet, and yet Maconites must love their Twinkies so much that they deem them worthy of ushering in the new blooms of the 300,000 cherry trees that were spread throughout the city by a real estate mogul who fell in love with them while visiting Washington, D.C. in the middle of the century.

What, you might also ask, was I doing in Macon, Ga. Last week? Two friends of mine, siblings who graduated from Yellow Springs High School in the 1990s, were presenting a voice and piano recital at Mercer University’s Townsend School of Music. The composer, Allen McCullough (’96), professor of music theory and composition at Mercer, wrote a song cycle for his sister, Helen (McCullough) Allen (’93), which was performed in Macon just three days after another of Allen’s works was performed at Antioch College by the Harlem Quartet. He wrote, she sang, and we all rendezvoused beneath the cherry trees over a deep fried Twinkie.

Despite what Maconites believe, deep fried Twinkies are a let down. “Could it be,” I wondered, “that someone found a way to improve the taste or texture of the national treat?” When I ordered mine at the food trailer, the lady unwrapped a fresh Twinkie, dunked it in batter, slipped it in the fryer for 4 minutes and topped it off with some powdered sugar. Essentially what I had was a funnel cake that was pregnant with a Twinkie. I couldn’t even taste the Twinkie. I felt robbed of the reward for having dared down so many calories in one sitting. And I would rather have gotten the lightness of a plain funnel cake without the density the Twinkie added to it. 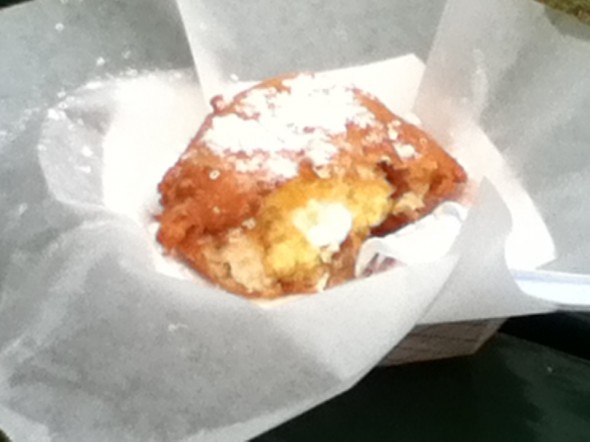 Deep-fried Twinkie in the deep South.

Recently my sister sent me an article from the Atlantic about obesogens, or chemical laden foods that scientists think our bodies metabolize more slowly than the same calories from whole foods… in short, fake food may make us fatter. Since a Twinkie alone would no doubt be classified as an obesogen, a deep fried Twinkie is obviously a megobesogen. And I’m here, after two bites, to say that it isn’t worth the ulcer.

While I was disappointed with my naïve foray into commercial foods remix, what I came away with instead from Macon was a zesty barbeque sauce from Allen, who composes both music and recipes. It’s a food that won’t kill you, and it’s somewhat Southern in origin as well.

If you still want to deep fry a Twinkie, go ahead. But don’t bother unwrapping too many, because I guarantee you’ll end up eating the original Hostess invention the way it was first conceived. And if you want to try to de-obesogenize a little, the New York Times ran a recipe for homemade Twinkies in last month’s food section. Finally, if you’re going to be in Macon, Washington D.C., Vancouver, Toronto or Japan in the next few weeks, the cherry trees are at the height of their glorious bloom for the year right now.

Reduce the wine and vinegar to about 3 cups. Add the butter and stir to melt. Add the remaining ingredients.

Spread over chicken and grill; serve the remaining sauce on the side.