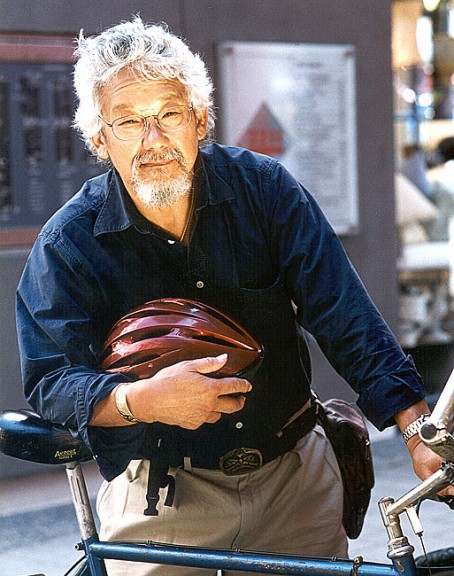 Canadian environmentalist Dr. David Suzuki will speak at the Little Art Theatre in Yellow Springs following the screening of his autobiographical film, Force of Nature, at 7 p.m. on Sunday, April 15. (Submitted photo)

If you had one last lecture to give, what would you say? In the film Force of Nature, Dr. David Suzuki, known as the godfather of the environmental movement in Canada, delivers a legacy lecture indicting humanity for undermining the planet’s life support systems.

But what will he say before his Yellow Springs audience?

Suzuki, 76, is a science broadcaster and long-time host of the Canadian Broadcasting Company show The Nature of Things, an author of 54 books and an environmental activist who has helped First Nation people protect their land and sounded the alarm about global climate change. Force of Nature (2010) interweaves Suzuki’s lecture with a retrospective of his life and work as Suzuki revisits and reflects on a Japanese-Canadian internment camp of his youth, his ancestral home of Hiroshima, his laboratory and a forest he helped to save.

“He’s not a zealot, he’s grounded in science and a deep spiritual communion with the planet and nature,” Little Art Theatre Director Jenny Cowperthwaite said of Suzuki.

After village resident Patti Dallas saw Force of Nature at a free showing at the Little Art on Thanksgiving Day last year, she was so moved that she came out of the theater in tears. That night Dallas e-mailed Suzuki to share her grateful sentiments. His assistant responded that he would soon be visiting Dayton. Later Suzuki accepted an invitation to speak in Yellow Springs because he has long been an admirer of Antioch College, according to Dallas.

Though Suzuki regularly charges a $30,000 speaking fee, he is speaking in Yellow Springs for free. Cowperthwaite expects the event to sell out. Tickets will be sold on a first-come, first-served basis, with no advance sales.

In the film, which won the People’s Choice Documentary Award at the 2010 Toronto Film Festival, Suzuki eloquently tells the story of how, in a cosmic instant, an infant species on the planet — humanity — has altered the biological, physical and chemical features of the planet, with catastrophic results for itself and other life.

Suzuki goes on to call species extinction an “intergenerational crime,” and condemns the ever-expanding consumer economy, which exploits the planet for raw materials at the expense of “real wealth.”

“When we measure everything in economic value, those things that matter most to us are worthless,” Suzuki says in the film.

Force of Nature is the fourth film in the Little Art’s two-month, six-documentary Environmental Film series. Windfall (2010), which exposes the dark side of industrial wind energy development in rural upstate New York, will be shown free-of-charge at 4 p.m. on Saturday, April 7. The series ends with a free screening of Home (2009), a climate change documentary made entirely with aerial footage, at 4 p.m. on Earth Day, Sunday, April 22.

Cowperthwaite organized the film series after several villagers inquired about screening the documentaries. As part of the Little Art’s “Community Presents” program, anyone can show their film by either paying the film’s licensing fee and collecting donations at the door or renting the theater for $125 per hourtu. Promotion and publicity are their responsibility.

Many recent films shown at the Little Art have been followed with a lecture or Q&A session with directors, actors and experts. For example, a Jungian analyst came from Columbus to shed light on the film A Dangerous Method. Having a stimulating conversation after watching a film enriches the experience, Cowperthwaite said.

“For myself it deepens the experience,” she said. “When you watch a film you have your own thoughts, feelings and perspectives to share. If the filmmaker is there you get a lot more background.”

Suzuki will speak for 30 minutes following the film.