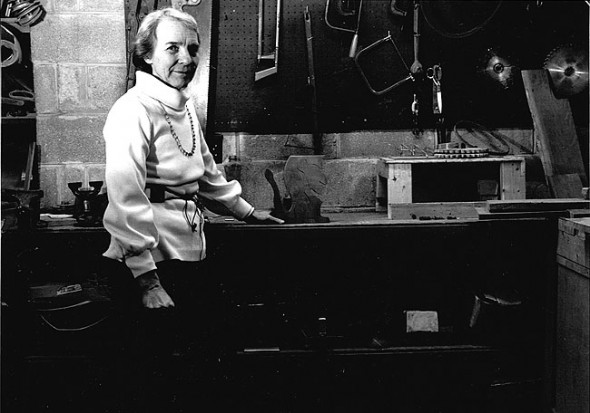 Billie Eastman, photographed in her workshop in 1980, is one of 50 local people who took part in Nancy Howell-Koehler’s Yellow Springs Photographic Survey. The entire exhibit will be on display at the Yellow Springs Art Council’s new gallery, 111 Corry Street, with an opening on Friday, April 20 from 6 to 9 p.m. featuring ’70s era music, food and trivia. (Submitted photo by Nancy Howell-Koehler)

Portraits of village, circa ’70s

When in 1980 local artist Nancy Howell-Koehler needed a portrait taken for her new book, it didn’t seem appropriate that she — a fine art photographer — hire someone to do it. So she devised a way to take a self-portrait using a long shutter release cord. Later, she used the same method to take photos of Yellow Springers.

Unknowingly, Howell-Koehler froze in time a moment in village history during a period of change, uniquely capturing the people and places of Yellow Springs at the end of a period of social and political upheaval.

Her exhibit of 50 photos of Yellow Springers in their own environments will be on display this month at the Yellow Springs Arts Council’s new gallery, 111 Corry Street. The exhibit opening, Friday, April 20 from 6 to 9 p.m., will celebrate the Yellow Springs of that era with ’70s music and trivia, period hors d’ oeuvres like deviled eggs, pigs in a blanket and stuffed celery, and an open mic to share local stories from the time.

“It was a very different place [then],” said Howell-­Koehler, who has lived in the village since 1965 and now has homes in both Yellow Springs and Cincinnati, in an interview this week. “The college had a lot to do with that. A lot of downtown businesses were changing … I look back and that environment has changed a great deal.”

National trends like the growing womens and environmental movements and anti-war activism impacted the village in the 1970s, according to Arts Council gallery coordinator Nancy Mellon. Locally, Mellon mentioned the role of local organization Women, Inc., Vietnam protests, the Antioch College strikes, the Xenia tornado and the Yellow Springs hail storm as pivotal events of the period.

Howell-Koehler, a former Antioch College photography instructor with several books and articles in the New York Times to her name, previously showed the exhibit here in 1996, when she donated it to the permanent collection of the Yellow Springs Arts Council.

Because most people don’t like to have their photos taken, Howell-Koehler said she found that the self-photography method made her subjects more relaxed and confident and that they didn’t make unnatural facial expressions. What comes through most in the exhibit, to Howell-Koeher, is Yellow Springs’ diversity.

“It was an interesting diversity that you don’t always see in all small towns in an era when people were acknowledging diversity,” Howell-Koehler said. She said she chose her subjects to get a sampling of the population at the time, including shop keepers, writers, activists, actors, teachers and artists. Villagers pictured in the exhibit include Priscilla Moore, Joan Horn, Joan Ackerman, Tony Dallas, Kent Bristol, Flo Lorenz, Phyllis Schmidt and Gerry Fogarty.

A ceremony at 7 p.m. will mark the opening of the Arts Council’s new space, which was formerly occupied by Rolling Pen Book Café and, before that, Dolbeer’s Cleaners. The new space is the group’s third gallery in as many years.

Mellon said that a large back room, or “creation station,” in the Corry Street building affords the group new opportunities for workshops, artist space, film showings and dance performances. Another benefit is that the building is more handicapped accessible, especially since Greene County Career Center students recently installed an ADA-complaint wheelchair ramp they built between the front gallery area and the back work space. Mellon added that the Arts Council is eager to use Corry Street for outside events and street parties.

“This is an opportunity we haven’t had in a long time,” Mellon said of the space, adding that new revenue generated from rentals would further support the nonprofit, which receives no Village funding, and its member artists, who Mellon said often do much of their art for free and are currently struggling financially.

At the “groovy” exhibit opening villagers shouldn’t be surprised to see ’70s relics like lava lamps and shag rugs as the town remembers an often-neglected era, Mellon said. More attention is paid to Yellow Springs in the ’60s even though much activism often associated with that decade actually took place here in the ’70s, she said.

“It’s a time for community reminiscing,” Mellon said. “What did we look like? What do you remember? What do you cherish about that time?”