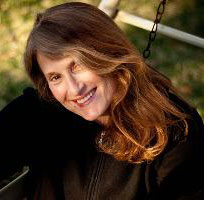 Shelley Colbert of Yellow Springs died Thursday, March 29, at 3 p.m. at Hospice of Dayton, surrounded by her family and close friends. She had come to Hospice several days previously, and her family — sons Ben and Spencer Beggs of New York City, and siblings Michele, Kim and Tod Colbert — had been with her since then, along with visits from Yellow Springs friends.

Shelley grew up in the village, the daughter of Rita and Chuck Colbert. She was a longtime provider of childcare for Yellow Springs children. In February 2009 she was diagnosed with Stage 3 breast cancer, and she fought a valiant fight against cancer since that time. She will be missed by her family, by her many friends and by her dog, Jimmy Watson.

A memorial service for Shelley was held Sunday, April 1, at the Antioch College amphitheater. Villagers brought their memories of Shelley, and many brought their dogs. The afternoon was rounded out with finger food and dancing to a live band organized by her high school sweetheart, Greg “Duke” Dewey, just as Shelley would have wanted it.