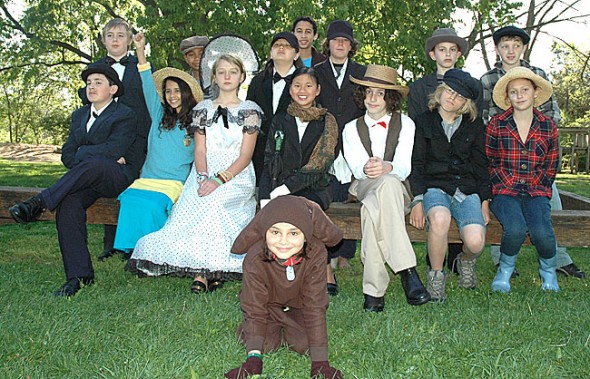 Antioch School older group students can now spell one of the longest words in the English language — supercalifragilisticexpialidocious. And they can sing it, too.

The famous tune from the 1964 musical film Mary Poppins is one that students at the child-centered, independent school say they are excited to perform as part of this year’s spring play this weekend.

The Antioch School presents Mary Poppins at 7 p.m. Friday and 12:30 p.m. Saturday at the Clifton Opera House. Admission is free, but donations will be accepted to offset production costs and fund scholarships at the school.

As a result, students learn teamwork, brainstorming, collaboration and goal-building, according to Older Group teacher Chris Powell. Even those with a small part play an equal role in the production.

“They learn more about teamwork than sports because it’s not a competition,” Powell said.

This cooperation was evident when two sixth graders both wanted to play the female lead, Mary Poppins. Ket White wanted the role to give her a leg up on future theater ambitions, while Jorie Sieck hoped to sing the character’s many fun songs, including “Supercalifragilisticexpialidocious.” They decided to split the role between the two performances. The girls aren’t competitive with one another, they said, and even help each other memorize lines.

At the Antioch School, students can play a lead if they want, an opportunity not typically afforded at other schools, said Ella Comerford, who plays Jane Banks. White, for one, is taking advantage.

“I thought that as a sixth grader this was my last chance to be a lead,” White said. “Being a lead you have more experience for bigger parts later on.”

On the other hand, Kayden Boutis, who plays the male lead Bert, didn’t necessarily want to have a major role, but he decided to step up as a sixth grader.

“The main reason I chose a lead is because sixth graders are always the leads,” he said. “I felt it was my responsibility to be a lead.”

Once a play is chosen and roles are divided and as the production evolves, students learn memorization and build their confidence, Powell said.

Ket, who once thought memorizing her lines would be impossible, now has them down with the help of daily practice. But she remains apprehensive about performing in front of a packed house.

“You shouldn’t be scared,” chimed in Cecilia Jones, who plays Mrs. Banks. “The audience doesn’t know what to expect.”

Later, when designing the sets and effects that will convince audiences they are in London in 1910, the setting of the play, the students must “think outside of the box” Powell said.

“It’s about building something magical,” she said.

And the world of Mary Poppins is especially magical. Hat stands are pulled from carpetbags, children get swept up chimneys and people and tables float about. This has posed a special challenge to students who have to figure out how to create the impossible, Powell said. As for the secrets behind the illusions, Powell said she’s not telling. Audiences have to see for themselves.

Acting as if they were someone else also presents a learning opporunity for students, who must figure out what makes their character tick.

Cecilia, as the “Sister Suffragette” Mrs. Banks, appreciates that her character is a powerful woman who silences her husband, she said.

Jorie, as a Mary Poppins, said she enjoys being dramatic and looks forward to singing in the vein of Julie Andrews, who played Mary Poppins in the 1964 film. She said her character is “never cross.”

But Kaden, whose character Bert tries to woo Mary Poppins, thinks Mary Poppins is mean — “a jerk.” Nevertheless his character sings of having a “jolly holiday” with her, and Boutis is excited to belt it out.

Grant Crawford, who plays Mr. Banks, weighed in on acting.

“I like to act because being me gets boring,” he said. “It’s fun to be someone else.”

Grant chose the role because Mr. Banks acts “grouchy” and “controlling,” two characteristics that Grant said he has in abundance.

On the other hand, Ella chose her role because it’s the character most unlike her.

While Powell helps with staging and gives the students tweaks in their acting, the show is ultimately theirs, she said. This ownership always translates into a fantastic final product, she said.

“They see it blossom into a real theater production,” Powell said.

Mary Poppins is co-directed by Sally Dennis, with music provided by Ben Hemendinger.