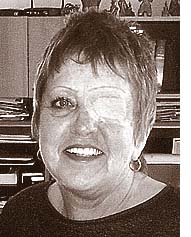 Judy was born in a small town in Pennsylvania, and resided in Yellow Springs for the past 12 years. As a young child, she enjoyed playing with her brother and going to get ice cream as a special treat. At 17, she gave birth to Christie and was blessed with a second daughter, Denyelle, at the age of 21. After a divorce, she moved to Ohio with her girls.

Judy was a hard-working single mom until she met Chris Erazo, who lovingly accepted the role of husband and father in 1979. Unfortunately, Judy soon started her battle with a rare autoimmune illness, Wegener’s granulomatosis. Against all odds and with the blessings of God, she regained her strength and went into remission. Eventually, Judy and Chris parted ways, but remained best friends.

A true animal lover, Judy would go above and beyond to help any animal in distress, and was often found with doggie bones in her pockets. She met Greg Schauer, who also had a passion for nature and animals, and this wonderful relationship led to marriage.

Judy loved to help others and enjoyed making peanut butter eggs and other baked goods for friends, including those at the dollar store and her bank. Judy’s health began to decline at the beginning of the year, and she was recently very ill. She died with her family at her side in the comforts of hospice. She was an awesome mom, wonderful daughter, great friend, loving sister and devoted wife. She will be missed by all who were fortunate enough to know her.

Judy leaves behind her daughter, Christie Wethington, son-in-law Mike and their four boys, Nicholas, Trevor, Tyler and Kyle of West Chester, Ohio and her daughter, Denyelle Willis, son-in-law Derek and their children Kane, Kayleb and Brielle of Yellow Springs. Other family members are Greg Schauer, brother Bobby and Pat Himes and parents, Robert and Evelyn Himes.

One Response to “Judy Schauer”