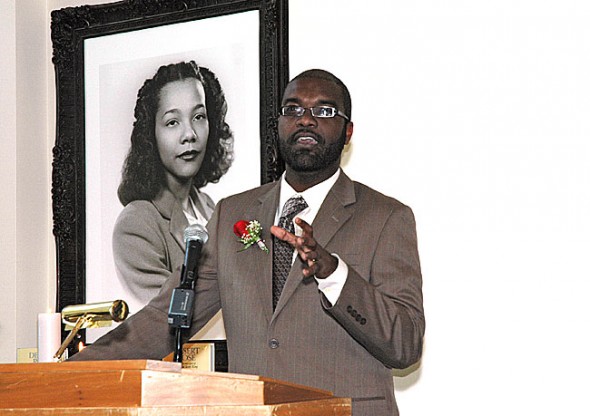 errick Weston was recently named the new pastor of the First Presbyterian Church as well as director of the Coretta Scott King Center for Cultural and Intellectual Freedom at Antioch College. (Photos by Lauren Heaton)

For the past eight years pastor Derrick Weston has carried with him a dog-eared copy of A Testament of Hope: The Essential Writings and Speeches of Martin Luther King, Jr. Since his time in seminary, King’s writings have been the pastor’s biggest intellectual influence, and for a man tasked with building community bridges in the name of social justice, no model could be better fitting than King’s. This month in separate but coordinated moves, Weston was hired as the new pastor of the First Presbyterian Church as well as the new director of Antioch College’s Coretta Scott King Center for Cultural and Intellectual Freedom.

Weston has ideas for the church and the college that are big but not unrealistic, and they hinge on his commitment to advancing the most vulnerable p 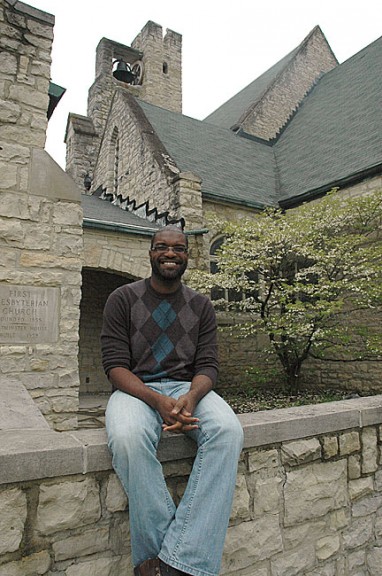 Weston at the First Presbyterian Church.

opulation of the community. In the wider church community, Weston sees that while the rhetoric alludes to being active in helping those less fortunate, the actual work is so overrun with “maintenance” issues that congregations never quite get to the activism they preach. Growing up in a conservative, evangelical Presbyterian Church in Pittsburgh, he became disillusioned as an adult with the lack of change the congregation was affecting on the social justice front.

But Weston trusts his faith deeply and instead of complaining, he chose to redouble his commitment to the church as a leader to help get it right. And in doing good, he believes that the church will grow, especially through younger generations who have tended to join nonprofit groups instead of the church organizations they have come to distrust. He discussed his approach in video format on an online religious forum “Two Friars and a Fool.”

“Worship can be a place where people are challenged to serve, encouraged to serve, empowered to serve and given opportunities to serve,” he said. “Service gives us an opportunity to bridge some of those gaps — race, socio-economic…and if we could put churches in a posture of service, those other “issues” [that divide us] would fade into the background.”

Antioch College has stood for the same values of equality and social justice. Through the legacy of Coretta Scott King and the center established in 2007 in her honor, the college had hoped to crystallize some of the change it proposed. Though the college’s closure in 2008 included the center, the new Antioch leadership had intended to revive it when the budget permitted, according to Antioch College President Mark Roosevelt last week. But when the opportunity to hire Weston presented itself this spring, the college couldn’t risk losing it, and brought him aboard to help conceptualize and lead the center’s revival himself.

“In my view of life, you bet on people, and this is a bet on Derrick,” Roosevelt said.

The local Presbyterians have also bet on Weston, who became interim pastor in January when former pastor Joe Hinds left to join a church closer to home. The local congregation first met Weston in 2010 while working for a nascent interfaith network Joined for Justice supporting criminal rehabilitation in the area. It turned out that the Yellow Springs members and Weston himself, who was then pastoring at the Oakland Presbyterian Church in Springfield, were the most active in the group. And when he applied for the interim position, the local congregation was excited to have him.

Presbyterian session member Jeanna Breza feels energized by the emphasis Weston places on social justice in the church, which aligns with her values and those of much of the congregation, she said.

“I’m excited to see our church get involved, and that makes me excited about church in a way that I haven’t been in a long time,” she said in an interview earlier this month. “It’s so refreshing to hear about current issues every Sunday — that’s what Jesus was all about, and that’s the Jesus I want to hear about.”

Weston grew up in a less progressive church in suburban Pittsburgh, and in college embraced a more compassion-oriented faith that was committed to making positive change in the world. After college he worked for the Pittsburgh Project, a nonprofit helping inner city families and youth, where he cemented his belief that the church should be doing the work of the nonprofits. After graduating from San Francisco Theological Seminary in 2007, he started his trajectory toward that goal.

His work at Antioch College is all part of that mission. At the CS King Center, where he starts on June 1, Weston is charged with the long-term goals of envisioning and defining what the center should be and how it should function to create a supportive campus climate for students of all cultures and backgrounds. According to Roosevelt, one of the tangible jobs of the revived center is to focus on the recruitment, retention and graduation of minority students. As the center gathers evidence from schools who’ve had success in that field and begins to formulate its own practices, Weston could eventually put the CS King Center in a position to help lead other institutions in the region as well.

Weston is interested in using the CS King Center as a platform for dialogue on difficult issues such as diversity, tolerance, peacemaking and justice — issues he says people give lip service to but, like self-segregation, often remain the status quo. The movement for change goes back to the philosophies of Martin Luther King, Jr. and his “beloved community,” a community of equals.

“At the heart of what Dr. King is talking about is the idea of a community of equals, and you can’t have that when people are separated from each other,” Weston said. “We’re not always willing to have uncomfortable conversations that might lead to personal and spiritual growth, but we have to be willing to do some uncomfortable things in order to bring change.”

Weston, who is 31, currently lives in Springfield with his wife, Marnie, and their son, Thomas, with a daughter well on her way. He is at the Presbyterian Church on Tuesdays and Thursdays, and will work a three-fourths position at the college. While the CS King Center will continue to be used for various campus and public events, Weston’s office will be located with the rest of the current faculty in the McGregor building on the Antioch horseshoe.