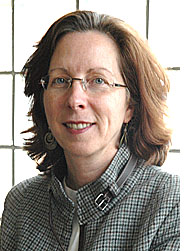 Yellow Springs Village Council is poised to vote on whether to hire Interim Manager Laura Curliss as the Village’s permanent manager following its regular June 4 meeting. Council members plan to discuss the hire in an executive session at the end of that meeting, according to Council President Judith Hempfling last week, and if they vote, would come out of executive session to do so publicly.

That Curliss might be hired without a search process came as a surprise to some villagers, as Council in February announced it would begin the same process as previously used to hire former manager Mark Cundiff. However, Council later dropped that process, although it did not publicly state it was doing so.

“I’m very surprised that there is not a search process,” Jerome Borchers, president of the Yellow Springs Arts Council, said in an interview this week. “I’m concerned that there’s not a way that various perspectives have a chance to interact” around the manager choice.

Council members may move ahead with hiring Curliss, an attorney who previously worked as executive assistant to the mayor in Wilmington, because they have been impressed by her perfomance since she took over for former Manager Mark Cundiff in February, according to Hempfling.

“She has a huge commitment to the public good and is great on infrastructure,” Hempfling said in an interview last week. “She knows how to get things done, and her deep knowledge is essential.” Curliss also brings to the job her previous experience developing affordable housing, solar energy, and public art projects that she gained working for seven years as executive assistant to Wilmington Mayor David Raizk.

“She’s done a lot,” Hempfling said. “She knows where the resources are.”

In an interview last week, Curliss said that she’s interested in the job because, ”I like the work, I like the community and I think I do it well.”

In February shortly before Curliss began the interim job, Council members publically agreed that they would spend about $10,000 to hire Don Vermillion of the University of Dayton to conduct a manager search similar to the one previously used to hire Cundiff, which had concluded with three finalists coming to the village for a day, being interviewed by Council and meeting the public in an open forum.

However, Hempfling at the Feb. 21 meeting tabled a resolution to hire the UD consultant without a public statement about Council’s change of direction.

According to Hempfling, the search process was taken off the agenda in late February when she found that Curliss was interested in the permanent manager position. Because that information related to personnel issues, which can only be discussed in an executive session, she felt she could not clearly state that the search was being dropped.

“We had intended to do a search but because Laura expressed interest in the job, Council did not move forward with the legislation,” Hempfling said. “I did not make a public statement because where there are issues of personnel, we are bound by confidentiality.”

However, according to Hempfling, she now believes Council could have handled the situation differently.

“I regret that there wasn’t more clarity,” she said.

According to Council member Rick Walkey this week, the decision to move forward with hiring Curliss is linked to the number of significant positions — such as police chief and assistant manager — that Council needs to fill in the near future, and the awareness that a search process can be costly and time-consuming.

“We’re anxious to get somebody on board so we can fill these openings. There’s a sense of urgency,” he said, stating that Curliss “seems a good fit. We think she’s strong.”

There will not be a public event for citizens to interact with Curliss because such an event would in essence be a performance review, which should only take place in executive session, Hempfling said. However, she said Council has already heard feedback from many citizens, and she encouraged any interested villagers who wish to offer impressions of Curliss to contact Council members individually before Monday’s meeting.

During her three months on the job, Curliss has garnered some mixed reviews from citizens with whom she’s worked. The March controversy around the Women’s Voices Out Loud art exhibit displayed in the Bryan Center was exacerbated by what some artists felt was an abrasive attitude from Curliss.

At this point, Jerome Borchers of the Yellow Springs Arts Council stated that he wonders what it would mean to the arts community if Curliss is chosen.

“There have been some difficult issues and it has felt difficult to have the kind of conversations we used to have with Mark (Cundiff),” Borchers said. “We haven’t been working together. It’s not a dialogue.”

One villager who has interacted with Curliss on a Village committee stated her concerns about the communication process.

“I felt a sense of antagonism from Laura and a desire to push her point of view strongly, without asking the kind of questions that she should be asking to understand other points of view,” said the villager, who asked to remain anonymous because the committee work continues.

In response to the concern, Curliss stated this week that she can’t respond to anonymous complaints.

“I think I’m a great communicator,” she said, stating that if someone is dissatisfied, she would like that person to “come see me, and we’ll talk about it.”

According to Hempfling, Curliss has received excellent reviews from the Village employees she has managed for the past three months. And she also garnered raves from Wilmington, where she worked previously. A January 2012 editorial in the Wilmington News Journal said “Yellow Springs’s gain is Wilmington’s loss,” citing Curliss’s former boss, Mayor Raizk, describing hiring Curliss as his assistant as “the best idea he ever had,” due to the many contributions she made to the community.

In her three months on the job so far, Curliss has been impressed with how ambitious this small village is.

“Your village lives large and that’s good,” she said in an interview last week, stating that “even though it’s a village, you have the capacities you’d find in a city.”

Especially unusual is a town as small as Yellow Springs having a municipal swimming pool and ownership of its own electric utility.

For the manager, this wide range of services means lots of responsibility, Curliss said.

“The challenge on the management side is, you have so much capacity going on, it can be a challenge to keep it moving,” she said.

Curliss believes she brings a variety of strengths to the job. As an attorney, she understands the legal processes required to move forward on projects.

“We get a lot of legal documents, and I can pretty quickly know what they are, what we need to do,” she said. “If you’re not a lawyer, it can be overwhleming.”

She also brings a can-do approach, Curliss said. “I have a ‘let’s get it done’ attitude.”

Curliss also brings to the job experience in many of the initiatives that the Village is already working on. For instance, she managed a solar energy project, worked on successful affordable housing projects, and was deeply involved in helping Wilmington enhance itself as an arts community, including commissioning Yellow Springs artist Jason Morgan to paint downtown murals and bringing festivals and performance events to town.

And as a former prosecutor, she brings familiarity with police departments, Curliss said.

“Economic development is not about site development. Sites are a dime a dozen,” she said, although a town also needs adequate sites when business comes calling. “You have to have something else to attract people, and I think you have it, an interesting quality of life.”

To enhance that quality of life, Curliss would like to see the Village go a few steps further in the direction it has already moved. For instance, the village could be more walkable and bikeable than it is, with trails added to connect neighborhoods. To be really walkable, some sort of public transportation, even a taxi system, could be developed, but “that’s way down the road,” she said.

Curliss would like to see more market-rate condos developed, as she believes many in their retirement years find the village attractive as a place to live, and those already here could downsize, opening up their larger homes for families. With its institutions of higher learning and relatively large population of seniors, it makes sense to develop more opportunities for lifelong learning.

“It’s where education and demographics come together,” she said.

Overall, she believes the village has what it needs to prosper, and its main challenge is to effectively sell itself to both business and individuals.

“I think the direction you’re going in is the right direction in so many ways,” she said, citing the Village’s commitment to the arts, renewable energy, walkability and greenspace preservation. “You know what your groove is. Just keep following it.”