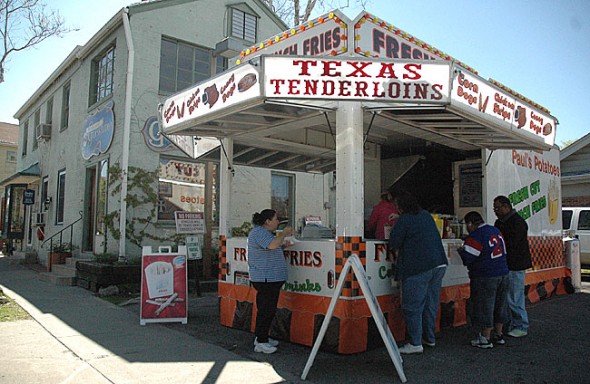 Foodcarts must now follow regulations which include not obstructing sightlines to existing businesses. (YS News filephoto)

Food carts allowed, but with rules

The “French fry truck” will no longer enjoy prime frontage along Xenia Avenue downtown. Although the BP gas station at 4 Xenia Avenue was one of three businesses granted conditional-use permits by the Village to allow carry-out food vendors on their parking lots, the truck was ordered not to “obstruct access or sightlines” to other businesses.

That decision took place at a special Planning Commission meeting on May 23, when the commission heard requests from several street vendors to operate in town. Commission members agreed the fry truck was too tall for the spot where it had sometimes parked at the southeast corner of the station lot, beside Bonadies Glass Studio.

By the provisions of the permit, the truck can still vend in the station lot, along the curb between the BP and the post office. The commission also granted permits for mobile food vendors at two other locations in the central business district: the Corner Cone, which now hosts an Indian food vendor, and Dragon Tree Tattoos and Gifts, which has recently hosted a hot dog stand.

“These brick and mortar businesses have obviously invested quite a bit,” Curliss said. “Certainly the Planning Commission can make it a condition that vendors can’t block lines of sight to their storefronts.”

This is the first time the Village has regulated vendors, which until now have operated under informal agreements with business owners. It was, specifically, the fry truck that generated several complaints, which led to the special meeting. The Village had also received feedback from members of the police department who worried that other vendors’ belongings stored outdoors overnight might be stolen.

“We felt strongly that with the number of complaints and negative observations we got that we needed to take whatever we could out of the [zoning] code and do what we could to respond,” said Assistant Planner Ed Amhrein.

In addition to setting the locations where mobile vendors can park, the permits require vendors’ contact information to be reported to the Village for income tax collection.

Dennis Nipper, co-owner of the BP station and a retired Yellow Springs police officer, said the fry truck is owned by a Cincinnati woman who is retired from the food service industry and “makes big bucks” with her fleet of seven to 10 food trucks. A truck is dispatched to Yellow Springs only when all of the woman’s trucks are not parked at other festivals. Nipper said he met the woman at a previous Street Fair and she became friends with his wife, declining to say how much rent he collects from the French fry truck owner.

Nipper said he saw no reason for the Village to regulate mobile food vendors now, as they have been parking in his lot without any problems for the past five years. The “bourbon chicken guy” parks rent-free at the BP and agrees not to sell beverages; Nipper observes customers going from the vendor into his store to get drinks, and therefore believes the relationship is mutually agreeable.

Similarly, Jane Nipper stated that vendors in the BP parking lot attract more foot traffic to downtown businesses. “We stop people. They take the time to look,” she said.

Planning Commission members seemed to generally agree that the presence of additional vendors was a net good.

“The food vendors do add a really nice ambiance to the village,” said Bill Bebko. “Food tends to bring more and more people.”

Two speakers at the public hearing for the permits indicated plans to open food carts in Yellow Springs. Maria Thornton said she has obtained a 12-by-7-foot mobile kitchen and will offer healthy Mexican-style fare. She was concerned about the Village’s regulation of vendors.

“For a long time, if you lived in the village you were allowed to go downtown and sell your stuff. What’s good for one business is good for the others,” she said.

It is not clear where either new enterprise will find a place to operate, and their owners must still make arrangements with business owners if they wish to park downtown. For now, the business owners must secure conditional-use permits and pay a $35 application fee. The owners were also asked to submit maps showing sufficient parking spaces. Current code requires a certain number depending on the business, but adding a conditional use requires yet another parking space, in addition to whatever area the vendor uses.

The three permits granted last week are in force for a year. The commission’s discussion about permitting mobile food vendors came as the Village is currently rewriting its zoning code.

“This is new regulatory territory. We have to decide, what do we want the central business district to look like when mobile food vendors are operating?” Amhrein said.

Regarding the French fry truck, “We were surprised people didn’t talk about aesthetics more,” Curliss said. Proprietors of nearby restaurants, for example, have an interest in what their customers see when they look out the windows. “It’s the scale of the thing. It’s a matter of proportion,” she said.

Bob Baldwin, who owns the property at 111 Corry Street housing Dragon Tree and HaHa Pizza, said Yellow Springs wants “a festival atmosphere, not a carnival atmosphere. We do need some restriction, but an attractive, festive downtown — that’s a plus.”

In response to complaints that the fried-food smell was a nuisance, resident Scott Warren pointed out that everything from signage to lawn care is open for debate.

“There are a lot of things in Yellow Springs to offend a lot of people without picking on the Texas tenderloins and French fries,” he said.

The Planning Commission interpreted a portion of the existing zoning code that aims to shape the downtown central business district into a “healthy, well-developed and economically viable social center” (Chapter 1256). Thus, some uses of real estate downtown, such as retail stores and restaurants, are principally permitted, while others are conditionally permitted. Conditional uses include residential units, churches, and drive-thru and carry-out businesses. Conditional uses are subject to specific standards listed in the zoning code and require a public hearing.

The principally permitted use of Bonadies, for example, should rightly receive preference over the conditional use of a mobile food vendor, Curliss said.

As the process of code revision continues over the next year, Village planners will have to decide how to regulate the mobile food businesses that seem to be increasing in popularity. Dry-goods vendors that operate under informal agreements, such as the t-shirt seller in front of Sam and Eddie’s Open Books and the jewelry maker in front of the Senior Center, might or might not become subject to regulation under the new zoning code.

The recent action by the Village concerned food vendors only, but the BP has sometimes also hosted dry-goods vendors on its parking lot. The conditional-use permit granted last week does not cover, nor does it prohibit, this use of its parking lot.

Sarah Siff is a freelance writer for the News.