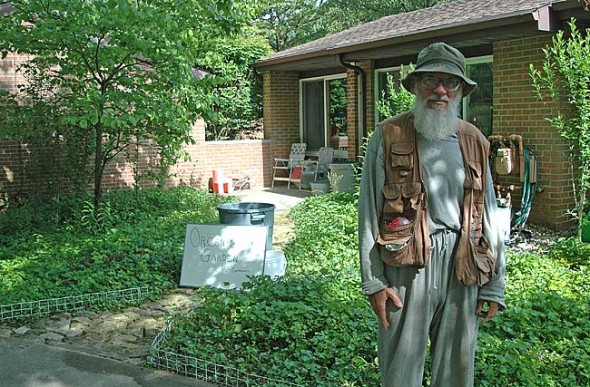 Daniel Pearson planted a low-maintenance cover crop of violets in the backyard of his Lawson Place residence. The violets don’t need to be mowed, keep the ground from getting waterlogged and provide a tasty treat to Pearson, he said. Pearson worries herbicides will be used to kill the vegetation, which is out of compliance with the property owners, Greene Metropolitian Housing Authority. See below for more photos. (Photo by Megan Bachman)

When Patricia High looks out at the colorful garden she has cultivated for 12 years at her Lawson Place public housing unit, it brings her joy and a sense of accomplishment. The blueberry bushes, roses, tomatoes and other flowers, vegetables and shrubs transformed a property that “looked like a dungeon” into an expression of nature’s beauty, she said this week. But High is now dejected because she has until July 1 to transplant most of her beautiful garden or the Greene Metropolitan Housing Authority, or Greene Met, will remove the plantings.

“It’s cheerful to look at now,” High said. “Hit it with Roundup [herbicide] and it’s brown and ugly.”

High is just one of many residents at Greene Met’s two contiguous properties on Lawson Place to be affected by the housing authority’s stepped-up site enforcement aimed at removing excessive vegetation from its public housing complex.

Resident Kathy Crew turned a mess of weeds in front of her unit into a bed of flowers that attracts butterflies and hummingbirds, she said this week. Though she understands the housing authority’s job to care for its properties, well-maintained gardens could be an alternative to wide swaths of turfgrass and the use of herbicides.

The 14-unit Hamilton Manor, built in 1965, and 25-unit Lawson Expansion, built in 1983, are owned and managed by Greene Met with subsidies from the U.S. Department of Housing and Urban Development, or HUD, and serve the elderly and disabled.

According to Mary Jo Beatty, senior asset manager for Greene Met, the housing authority needs to improve its score on annual inspections from HUD or could face the loss of federal subsidies.

“What we’re trying to do is ensure that residents have a healthy, safe place to live and affordable place to live in Yellow Springs,” Beatty said. In the past deficiencies for overgrown and penetrating vegetation have lowered the site’s score, Beatty added. The housing authority was deemed a low performer several years ago in part due to deficiences for overgrown planting. As a result, funding was cut.

Since the most recent inspection took place in winter, when many plants had died back, and this one might occur during the summer months, Greene Met has become more proactive in clearing out vegetation in recent weeks. Last week Beatty and two other Greene Met representatives went door-to-door to tell residents which gardens they could keep, and which they should transplant ahead of a July 1 deadline, when Greene Met will remove them. In a recent letter to residents, Beatty said that plants in areas beyond the original flowerbeds should be taken out, in part to clear paths for mowing. This includes all plantings on a side of a residence and those further away than a few feet from a building, though the exact boundaries vary for each residence.

Former Greene Met director Donna Denman, who retired in 1994, said that the gardens were never an issue during inspections while she managed Lawson Place. In general, outdoor appearance wasn’t as important to inspectors, she said, adding that the current situation is a tragedy and the result of an out-of-touch bureaucracy at HUD.

According to a deficiency definition manual from HUD’s Real Estate Assessment Center, or REAC, which officially carries out property inspections, overgrown/penetrating vegetation is defined as when “plant life has spread to unacceptable areas, unintended surfaces, or has grown in areas where it was not intended to grow” with three levels of deficiency depending upon how extensive and dense the vegetation has become, whether it is penetrating buildings, HVAC units or other surfaces, or if it is obstructing the path of walkways or roads. Also called “grounds,” site vegetations is one of 60 items evaluated during an inspection and is given a weight of 0.125, according to a REAC scoring table. Other factors vary from as low as 0.020 for lighting to as high as 0.160 for roofs. Points are docked each time a violation is seen, according to Beatty.

Even though leases stipulate that residents can’t alter their property in any way, Greene Met is willing to work with residents by allowing gardening in designated areas, Beatty said. In some cases existing shrubs will be removed to give residents more space, she added.

One longtime resident, who preferred to remain anonymous, was not pleased with the compromise, since she maintains what she calls a “diverse, ecological garden” outside of the original flowerbed boundaries. Gardening has been a healing activity for her and one that has brought community members together to share plants and talk.

“To come out and have nothing but craggy grass is going to be a daily trauma for as long as I live here,” she said.

Other residents felt betrayed by Greene Met since they had received verbal permission to plant in areas beyond designated flowerbeds over the years, they said.

Another option for residents is to get a plot at one of the five neighborhood gardens scattered around the village. Though the nearby Bill Duncan Park neighborhood garden is full, along with the garden at the Friends Care Community, there are spaces available at the Glass Farm, Fair Acres and Corry Street gardens, according to garden organizer Doug “Thor” Bailey.

Several other community members have stepped up to help the residents at Lawson Place. Vickie Hennessy from the Green Environmental Coalition is circulating petitions in town criticizing how Greene Met has handled the situation and asking the housing authority to delay its plans to remove vegetation. Hennessy said Greene Met’s actions are unjust, that many of the gardens in question are mature and well-cared for.

Amy Crawford, home assistance program coordinator for the Yellow Springs Senior Center, has visited residents in recent weeks to offer emotional support, help them understand what is being asked of them and to advocate on their behalf in dealings with Greene Met.

“We’re trying to help the residents in whatever way we can while still maintaining a relationship with our housing authority because they provide an extremely important service in our community,” Crawford said. The Senior Center is also organizing volunteers willing to help residents transplant vegetation in the coming weeks.

But some residents are not pleased with the options. Daniel Pearson, for example, planted a garden to fix waterlogged areas as much as for aesthetic reasons. Pearson’s backyard, which is directly below a large sycamore tree, was turning to mud since its unhealthy grass saw little sunlight, he said. So he planted violets as an alternative cover crop and added gravel around his residence so water could infiltrate rather than pool.

“You don’t have to mow grass. You can have a nice, neat lawn without herbicides and without mowing,” Pearson said. Since his designed flowerbed is in his front yard, the violets must be pulled up, Pearson worries that flooding will ensue.

Beatty responded that before taking matters into their own hands, residents should let Greene Met know of any maintenance issues.

“The housing authority has always made sure that our maintenance has been addressed in a timely, prompt manner,” Beatty said.

Daniel Taylor has a separate concern. Though his bed of perennials which includes strawberries, mint and chives, is not slated for removal, the 60-year-old is worried about the use of herbicides like Roundup elsewhere on the property in an effort to cut back vegetation. Greene Met has not said it would primarily use herbicides to kill overgrown areas, but in recent weeks housing authority maintenance workers have sprayed weeds in common areas, on the edges of cement patios and walkways, and around trees and shrubs planted by Greene Met, according to residents.

“My major concern is if they destroy [the gardens] their method of destruction is Roundup because it’s poison,” Taylor said. “When they did it to my back porch my eyes watered for a week.”

Charla Brent, who has muscular dystrophy, is concerned about the impact of herbicides on her immune system, which could aggravate her disease, she said. An 11-year resident, Brent paid a professional landscaping service to help her create a perennial, deer-resistant garden that screens her from neighbors and enhances her living space.

“[My garden’s] very calming to me,” Brent said. “It’s my sanctuary. It’s my creative outlet.” 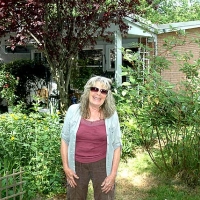 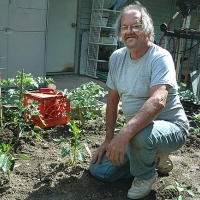