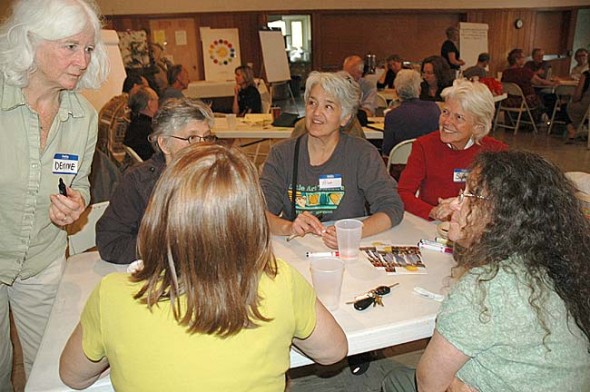 Saturday's public art forum at the First Presbyterian Church was a celebration of the arts in Yellow Springs, along with a brainstorming session on ways to enhance the arts community and what role, if any, local government should play. (Photo by Diane Chiddister)

Saturday’s public art forum at the First Presbyterian Church was a celebration of the arts in Yellow Springs, along with a brainstorming session on ways to enhance the arts community and what role, if any, local government should play. The event, which drew about 50 villagers on a beautiful June morning for a combination of short presentations and small group discussion, was sponsored by the Yellow Springs Arts Council, or YSAC.

The purpose of the event, according to YSAC President Jerome Borchers, was to get feedback from arts supporters for a YSAC proposal on an arts policy to Council. Council has been considering developing such a policy regarding Village-owned facilities since a spring controversy surrounding the inclusion of several nudes in an exhibit at the Village-owned John Bryan Community second floor, which was being used as a gallery. Borchers also reiterated two YSAC recommendations made at a recent Council meeting, including that the group intends to stop using the Bryan Center hallway as a gallery. However, he emphasized that there is still a need for more public spaces for art.

“Public spaces are community spaces,” he said. “How can we find a way to create them?”

The arts have always played a significant role in village life, according to an introductory presentation by YSAC members Nancy Mellon, Deb Housh and Antioch College student Meg Miller, who are researching the history of the arts in Yellow Springs. And the arts are a significant driver in the local economy, Mellon said.

“Life with art is a vibrant life. It reminds us to stop and be with the beauty and complexity and sheer nuttiness of life,” she said. “Why do people visit Yellow Springs? Why do they want to move here? Because it feels alive.”

Village government could do more to support local art, many participants said, including some sort of funding for arts activities. But local government does not have a role in dictating the content of art exhibits, including those on public property, many agreed.

“In our group, the only thing we agreed on is that we should have a no-policy policy,” YSAC member Joanne Caputo said, sparking applause from the audience.

While Council members Lori Askeland, Rick Walkey and Karen Wintrow, along with Interim Village Manager Laura Curliss, attended the forum, none of them spoke. The event was focused on feedback from local artists and arts supporters.

In a presentation, Sandra Love of the Antioch Writers Workshop cited the economic benefits of the arts in a community. Research by the National Endowment for the Arts, or NEA, has shown that people who come to town for an arts event tend to spend on average about $10 at other businesses, not including lodging and food, she said. And some studies have shown arts to bring a greater economic benefit than sports, according to Love.

“The arts has a clear economic advantage in a community,” she said.

In small group brainstorming sessions, event participants suggested a variety of ways to enhance the economic effect of arts in Yellow Springs. Some of the suggestions included efforts to enhance the livability of the village, such as more youth-oriented arts activities. Other suggestions included more arts classes, busking, festivals, galleries, affordable workspaces, shared residencies, collaborations and creating a ticket kiosk downtown.

The arts help to promote a feeling of safety and a tolerance of diverse opinions, both of which help a town attract newcomers, according to Johanna Smith. And for many people, the arts are linked to a healing quality that they seek in a town, Joanne Caputo said.

“For a lot of us, finding yourself here is about the arts,” she said, referring to the slogan that hangs on banners downtown.

What process for controversy

Controversies in art should be expected, according to presenter Dennie Eagleson, longtime Antioch College photography professor and current creative director of the college. Eagleson spoke of a recent exhibit at Antioch that troubled and offended her, one she realized was difficult because it challenged her assumptions and values. And such a process, she stated, is one of the ways that art enriches us.

“We need to stay open and know that while we may not “get it,” that the work needs to exist in the world,” she said.

Regarding a public process for the arts in Yellow Springs, Eagleson said, “We need to find a way to have a group of people who are having those hard discussions about art.”

In small groups, participants considered their goals for public art, and strategies for reaching the goals. Some suggested strategies included further negotiations around using the Bryan Center as an art gallery, and trusting citizens to work out any disputes that arise over art. In his small group, according to John Booth, participants suggested that Village government offer artists more support, both in terms of funding and space.

“We should give artists a venue to make art locally because a lot of us need to go somewhere else to get paid,” he said.

However, participants in a separate group emphasized that Village government has the responsibility to consider all people’s needs, while artists do not.

“Where you want art, someone else wants a tree,” a participant wrote.

Sharon Mohler spoke of the difference between living in Yellow Springs, where she feels herself respected as an artist, and in a previous town, where she did not. However, she said, artists will react badly if they believe the Village government wants to censure their work.

“If I start feeling bindings on myself, I’ll do things to resist those bindings, because that’s what an artist does,” she said.

In the final segment of the morning, former Arts Council treasurer Jo Wilson and WYSO General Manager Neenah Ellis spoke of past funding for the arts groups with which they’re familiar. Yellow Springs arts organizations have prospered due to local, state and national support, they said.

Various arts organizations have received considerable funding from state and national arts organizations, according to Wilson, including about $60,000 from the Ohio Arts Council to local artists as well as $15,000 from the Yellow Springs Community Council. The Yellow Springs Community Foundation has contributed about $50,000 yearly to artistic projects, and the Morgan Family Foundation has been a generous contributor.

“We have lots of support locally,” she said, including several generous local philantropists.

Regarding WYSO, Ellis spoke of the radio station’s beginnings as the senior project of an Antioch College student in 1958, and how students ran the station for the next 15 years. Several former college students who became successful in media got their start at WYSO, she said, including local filmmakers Julia Reichert and Jim Klein.

With considerable local support, the station has grown from a 10 to 50,000 watts, and from a budget of zero to one of $1.5 million, and Antioch University has just invested $1 million for the station’s new studio. The station has in recent years received considerable national attention, including receiving one of 10 Localvore grants, with the other grants going to stations in cities such as New York and San Francisco.

“People know about WYSO all over the country,” she said.

The station’s longevity and success can be attributed to the support it has received from the college, university and the village, Ellis said, stating, “I’m so blown away by the community support.”

In closing, YSAC President Borchers emphasized the need to keep talking about arts issues and ways to support local art.

“These conversations need to happen” he said.