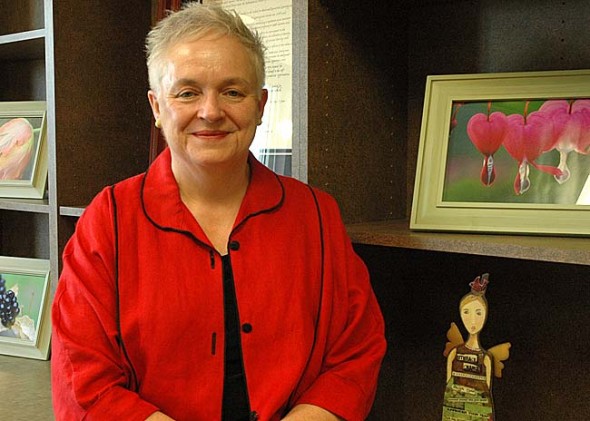 When Ellen Wood Hall was appointed to Antioch University Midwest last year as the vice president for academic affairs, she didn’t know she would be changing titles so quickly and so often. But a little over a year later, after a brief stint as provost this spring, her current role as interim president of Midwest has given her a challenge that she feels up to embracing. Her goals this year are to reverse downward enrollment trends and to more evenly balance the strengths of all three of the school’s academic programs: the master’s degree programs, the school of liberal studies and the school of education.

Hall came to Midwest last year from the Registry for College and University Presidents to take a new leadership position as VP of academic affairs. The position had been created to unite the school of education and the school of liberal and professional studies, both of which had separate executive deans. She served that function until this past February, when Midwest President Michael Fishbein was suddenly absolved of his duties and barred from the Midwest campus. On March 1, Hall assumed leadership of Midwest as provost and interim chief executive officer, while Fishbein was reportedly on “special assignment” with then Antioch University Chancellor Toni Murdock. On July 1, Hall officially took over the presidency of Midwest, the same month that Antioch University officially welcomed its new chancellor, Felice Nudelman, former director of education for the New York Times Company. According to Nudelman, Fishbein is still on contract with the university until July 2013.

Midwest has experienced flat enrollment over the past several years. In 2008–09 the unduplicated headcount, which includes both full and parttime students, was at 959, and while the following year there was a slight uptick, in 2010–11 the count was back down to 957.

Since the recession began in 2008, Hall said, Midwest has seen a “downturn” in enrollment trends, although she said the number of fulltime students for 2011–2012 was not available at this time. And this year it became clear that Midwest was lacking in administrative functions related to student retention.

“I came into this right about the time a considerable deficit was being discovered,” Hall said.

Midwest is also looking critically at enrollment because the university received a $13.8 million bond issue in 2006 for its new building on East Enon Road, at the entrance to the village’s commerce park. The repayment of the bond was based on an annual 10 percent growth in enrollment, which only occurred the first year in 2007. Midwest is currently repaying its debt without a problem, and now owes just $11.2 million to the Ohio Higher Education Facilities Commission, according to OHEFC. And according to Hall, Midwest is working with the university to attract and retain more students. And due to the strategies Hall has put in motion, Nudelman has already seen an increase in inquiries for next year’s enrollment at Midwest.

“The university is supporting Midwest in a pretty significant way, and we’re working very diligently for ourselves and the university,” Hall said.

The name for the work Midwest is doing to get back on track is Project Turnaround. The first principle, according to Hall, is to revitalize programs by working with faculty to build on the viability of its curriculum. The school currently has 20 full-time faculty members and a list of over 100 adjunct faculty members. The second goal is to become a more student-centered campus for adult learners, who are balancing the demands of school with jobs, children and are sometimes trying to make a big career transition. Midwest is also aiming to invest wisely in both students and faculty. For greater student retention, the school needs better enrollment management and financial aid, and in personnel Midwest is committing to its full-time faculty.

“Adjuncts are great because they enrich subjects and provide expertise in the field, but for planning a program it takes a critical mass of full-time faculty to keep programs going and vibrant,” Hall said. “We have wonderful faculty who are committed to the principle of social justice that Antioch was created on to begin with.”

As the fourth principle of Project Turnaround, the school also plans to manage its finances responsibly.

Midwest has challenges, including the fact that it has never had a significant endowment and is a largely tuition-driven institution. The economy has yet to recover, which for some institutions means more people going back to school, but for Midwest has not resulted in an increase in new students, said Hall, who added that academic admissions is a very competitive business. And because Midwest’s adult students have lives that become increasingly stressed in a tough economy, they have begun taking fewer classes and taking longer to complete their degrees, she said.

To combat those trends, the school has hired a vice president for enrollment management and started to build a scholarship fund for its students. And it’s working to balance the enrollment more evenly between the master’s degree programs, the school for liberal studies and the school of education, which has traditionally accounted for about half of Midwest’s students, but has recently begun to decline, Hall said (an event that is coincident with the state’s constant shifting of education standards for public school teachers.)

Hall believes that it’s critical to keep a positive attitude about moving forward and achieving success as a team. And there is plenty to be positive about at Midwest, which has good people, is committed to the right values and is making a difference.

“People who come to Midwest inevitably say their lives have been transformed, that ‘it was the best thing I ever did,’” she said. “It’s special here — something happens that’s worth keeping here.”

Hall is also inclined toward the community of Yellow Springs, a place she feels connected to, even though she’s currently leasing a space in Beavercreek. Her permanent residence is at the Finger Lakes in New York.

Hall holds a Ph.D. in French literature from Bryn Mawr College and has been in higher education for 38 years, serving in faculty and administrative positions at Westminster College, Agnes Scott College, and Wells College. Hall also served as the first female college president in South Carolina at Converse College. She was academic dean at Wells for 11 years before taking her first assignment from the Registry in 2007 at Central Washington University.

Antioch Midwest is her second assignment from the Registry, and it’s one whose legacy of innovation and social justice she feels especially satisfied to be part of.

“This is an institution that actually lives by its values — people mention Horace Mann all the time!” she said. “I find that very compelling, and it’s important to me to be doing what little I can to make sure [Midwest] continues to have a place in higher education.”

While Hall is technically the interim president of Midwest, the university has not yet planned a search for another president, and Nudelman said this week that she hopes Hall will consider staying on.

“I’m excited by Ellen’s leadership and I see it heralding a new beginning for Antioch Midwest,” Nudelman said. “She’s someone who is proactive, smart and capable, and she is building teams that are helping to turn that campus around.”