BLOG – Where the meteors shower

Last night, I fully intended to sit down and write a post about my family’s recent summer vacation. But, as so often happens when returning from one carefree sojourn or another, I felt disinclined to return to engaging in such efforts, and instead joined friends and neighbors for a bonfire.

As the evening wound down, one party-goer exclaimed that he’d just seen a shooting star. Apart from the obvious considerable poignancy of the moment, I was reminded that Earth is embarking on one of the most prolific meteor seasons of the year, manifesting in a week’s time during the Perseid shower.

My first viewing of said shower was experienced while lying on the front porch of my parents’ suburban Florida home. I had recently graduated college, and was in a period of young adult transition. A bit aimless and between decisions, my sister and I lay on the concrete with pillows under our heads, discussing the strangeness of returning home as freshly-minted adults. We watched from the dark porch as light after light flitted, burst and dissolved, quick as blinking. In retrospect, it seems like such an overwrought metaphor, talking in such a way against such a spectacle, but there you have it.

For those who don’t know about this cosmic summer light show, I’ll do my novice best to explain. The Perseids originate from the Swift-Tuttle comet, and what we see as burning fireballs in the heavens are just cast-off bits of dust spinning off and igniting once they reach Earth’s atmosphere. The Perseids are named thus because they appear to originate from the constellation Perseus. I have never been great at identifying constellations, as the D I earned in astronomy my 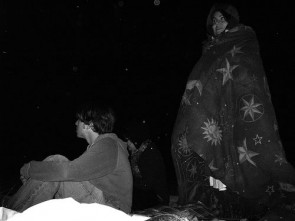 During the Leonid shower, fall of 2006; astronomy extra credit with friends. Weather conditions obviously less favorable during this shower than in August.

final semester in undergrad reminds me; nevertheless, I did enjoy going outside and looking at stuff that’s far away, in space and in time. I can point out Orion or the Big Dipper, just like any third grader, but don’t know Perseus from the next vaguely-mythologically-based cluster of stars, so I can only really say that, from what I understand, interested meteor-watchers should look toward the horizon in a north-easterly direction. The height of the shower will take place the nights/early mornings of August 11/12 and 12/13, and the light from the crescent moon should not interfere much with the show. Get out to a deep, dark place, and you could see 50 or more meteors an hour.

I can’t stop myself from belaboring the aforementioned metaphor implied by the existence of a meteor shower. It’s impressive that this bit of dust, this ex-piece of comet, should be called by a different name depending on where it is in the universe: outside the earth’s atmosphere, it is a meteoroid, and when it enters the atmosphere and becomes visible by way of ignition, it’s a meteor. Once it’s on the ground, it’s a meteorite. I mean, I think I’ve got that right. Like I said, D in astronomy.

I have yet to actually view the Perseids here in Yellow Springs, but am interested to find out, in a week, if the experience elicits the same feelings as it did those years ago on the porch with my sister, laughing and shushing each other at 2 in the morning outside our parents’ window. We have both, since then, moved from that place on into a new one; the next atmosphere, to really beat that poor old horse.

Well, it comforts me to know that, wherever we are, the comet remains the same, and the bits of dirt it sends down each year will find us, regardless. Maybe we should coin a new truism: “Home is Where the Meteors Shower”?

I think that would look excellent in cross-stitch.

2 Responses to “BLOG – Where the meteors shower”