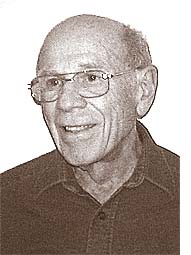 Paul William Wagner died peacefully at home on July 25 with his wife, Carolyn Treadway, at his side. He was 91.

Paul was born on July 23, 1921, in Trotwood, Ohio, to Myrtle Marie and Warren William Wagner. He had one sibling, a younger brother, Richard. The family were members of the Church of the Brethren. A rural childhood and loving parents launched him into a positive, productive life, filled with hard work and appreciation for the natural world. Fishing in Wolf Creek with his father was well remembered. Ability to work with his hands enabled him to build kites and small vehicles as a child, and to help in the family business, which designed and built camping trailers, early versions of what we know as RVs.

Paul learned to play the trumpet, becoming active in his high school band, sometimes as student director. He was also director of his church choir. At Antioch College he joined the orchestra. He had dyslexia, which meant that school was never easy for him, but determination and persistence carried him through. Paul chose Antioch in order to study engineering. He went on to obtain a master of science in engineering degree at the University of Cincinnati.

World War II brought to Paul the realization that he was a conscientious objector. He served his country in the Civilian Public Service, working in forestry in several states, followed by an assignment in the Virgin Islands teaching electrical shop in a high school. It was during that time that he developed his passion for sailing.

While Paul was in graduate school he met and soon married Betty Lavell, a secretary in his department. They were married nearly 60 years, until her death in 2005. They lived in Puerto Rico while Paul taught at the University in Mayaguez, after which they settled in Yellow Springs in 1949.

Paul found longtime employment with Morris Bean and Company, where he did research and development in materials used in castings. He ultimately advanced to a management position in the company.

When his children had finished high school, he dedicated time to boating, owning and modifying several sail boats and power boats. A member of the family circle “admired [his] abilities to problem solve, by creating something or by thinking it to a logical conclusion. [His] wood working talent and skills at looking at small spaces on the boat and crafting something that worked and fit were masterful.” A circle of friends and family partook of the summer weeks on Lake Erie (with a focus on Pelee Island) and in the North Channel of Lake Huron.

At the age of 70, Betty and Paul took up ballroom dancing and became very accomplished. As the years progressed they sailed in the summer and danced in the winter.

A year after Betty’s death, Paul met and married the second love of his life, Carolyn Treadway. Since the last boat had been sold by then, they rented a sailboat out of Gore Bay, Manitoulin Island, so he could show her the Canadian waters that he loved so much.

In addition to work and family, Paul cut a swath in the Yellow Springs community. He was a longtime member and sometimes president of the school board, including the time when the new high school was built. He was the driving force in the envisioning and founding of Friends Care Community, through the Friends Meeting. His involvement continued as he chaired the board of that institution through the first two terms. Later he participated in fund raising for needed improvements.

When Yellow Springs Friends (Quakers) gave Paul the task of figuring out where there was space for a literature rack in tiny Rockford Chapel, he soon came to this conclusion: “We don’t need a literature rack; we need an addition!” The resulting structure has since been well used by many, both within and outside of the Quaker congregation.

Paul was a perfectionist: meticulous, fastidious and “persnickety” (his mother’s term, when he was small). Both patient and impatient, this man just wouldn’t give up. These traits were evident in how he took care of himself. Discipline in what he ate and how he exercised kept him in good shape. He was pro-active in health matters.

An unfortunate consequence of radiation for skin cancer on his shins in November and December 2011 resulted in severe and excruciatingly painful leg burns that could not be healed.

Nearly wheelchair bound and in constant pain, Paul chose, after great practical and spiritual thought, to end his life by stopping eating and drinking. This decision was supported by his wife and children, his hospice team, and the Yellow Springs Friends Meeting (his beloved spiritual home). He was clearly at peace with his decision, and several times during his final days expressed gratefulness for the wonderful life he had lived, his loving family, friends and community, and for the beauty that surrounded him.

A memorial is planned for 1 p.m. on Saturday, Sept. 8 at the Glen Helen Building, located at 405 Corry Street in Yellow Springs.