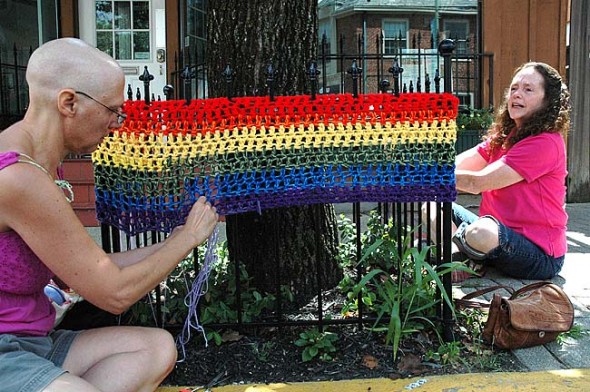 On Saturday, July 28, local residents Susan Gartner, left, and Theresa Mayer rehung a knitted sleeve that was removed last week without permission from one of the the trees downtown. (photo by Lauren Heaton)

When Yellow Springers celebrated Pride weekend last month, many honored the occasion by attaching colorful bands of yarn and felt around trees and light poles downtown. It was a prideful yarn bombing in support of the lesbian, gay, bisexual, transgender and queer community and the acceptance of people of all color, creed and orientation in the village. So it came as a shock when some villagers noticed this month that someone had been cutting down the art they used to symbolize that tolerance and respect.

Due to what some believe was negative and possibly violent intent behind the act, several artists interviewed for this article preferred to remain anonymous. But according to one local artist, she began noticing the art disappearing downtown along Xenia Avenue on Friday, July 20. Then last week, about 10 pieces of rainbow colored yarn crocheted to trees mostly on the east side of the street went missing. According to police, a local resident reported seeing a man heading northbound on Xenia Avenue around 7 a.m. one morning last week suddenly stop his car, quickly cross the road and use a knife to cut down two pieces of knitting on trees. According to the resident, the offender also yelled something before running back to his car and driving off.

According to police, because the trees are public property, the “offense” wasn’t a crime per se, and villagers have been attaching and detaching items from the trees without official notice for years. And while police can’t attribute any motive to the alleged offender except that perhaps he didn’t like the art, an officer this week agreed that what happened was ethically wrong and disrespectful of the art that the local community values so highly. And though police have no suspects related to the complaints, they agreed to monitor the downtown area for vandals and suspicious activity.

But a second local artist who also noticed some of the art missing said she did not believe that the destruction of the art was motivated by concern for the trees, as several of the multi-colored pieces had also been removed from electric poles. And the village has sustained dozens of “yarn bombs” over the past five years, only one of which was removed four years ago due to a real concern over a tree, she said. To the artist, the crime appeared to be a political statement about intolerance and hate, as well as the destruction of public art.

“It’s vandalism — it’s homophobia and public arts destruction, both of which are not cool,” she said.

So this weekend, villagers responded. Organizing over Facebook, dozens of residents and families came out to replace the rainbow colored artwork around the downtown. Using their art to speak for tolerance and love, they draped posts in felt, crocheted yarn around tree trunks, knit yarn around sign posts and even used one of the discarded artworks (found in the trash and laundered) to decorate a fence collar around one of the tree pits. In lieu of knitting, other supporters offered to pay for art supplies.

Because the offense was committed against a group of people, several of the artists want their response to be group-oriented as well, to send a message that the group has supporters, possibly a whole town, who believe in openness, tolerance and embracing of diversity, one artist said.

Local residents Susan Gartner and Theresa Mayer helped to reattach one of the pieces in front of Dunphy Real Estate over the weekend. Mayer said she hesitated at first to get involved, but decided to come out in the spirit of love and forgiveness, even for those who believe differently than we do. And according to another artist, the weekend was helpful in that “it brought people together in a very healing way.”

“Some people might not think this is serious, and you know, it kind of is,” the artist said.