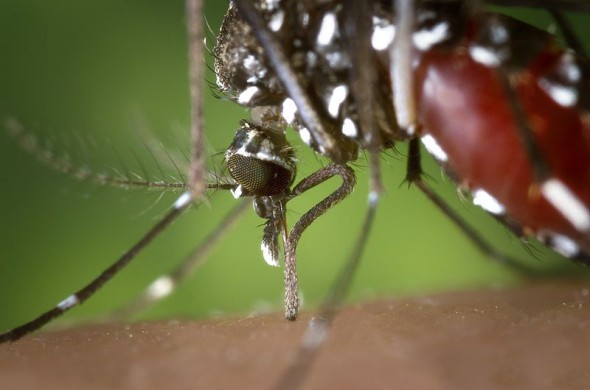 The Asian Tiger Mosquito can carry the West Nile Virus and transmit the disease to human through a bite (Photo courtesy of the Centers for Disease Control).

The neighborhood, south from Brookside Drive and west from Spillan Road, will be sprayed with insecticides this week after laboratory tests revealed the presence of West Nile Virus in the Asian Tiger Mosquito. The testing occurred after a resident in the area complained about high mosquito populations. It was the first case of a mosquito carrying the disease in Greene County since testing began in June (18 other counties have tested positive).

Download the letter residents received from the health district.

Villagers are also advised to protect themselves, especially if they are out in the early morning or early evening hours, by using mosquito repellent containing DEET and wearing long sleeves and light colored clothing. And they should check for areas of standing water on their properties, including rain gutters and bird baths, since mosquitoes breed in water.

The insecticides being used — Anvil 2+2 Sumithrin and Piper O’Neill Butoxocide — are designed to kill adult mosquitoes by releasing a fog that hangs in the area for 20 to 25 minutes, and are safe for humans and animals, according to the health department.