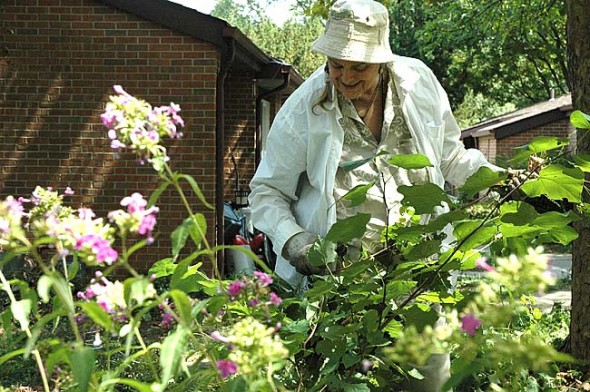 Last weekend, Marilyn Van Eaton weeded a large area of perennial plants that she tends in front of her Lawson Place residence. The plot, which she first planted 17 years ago, is slated for destruction on Oct. 1 by Greene Metropolitan Housing Authority, which owns and manages the public housing complex. Greene Met is removing vegetation at the property to make sure the agency passes federal inspections and keeps its subsidies. (Photo by Megan Bachman)

Lawson gardens are still at risk

Marilyn Van Eaton began seeding a garden at her Lawson Place public housing unit 17 years ago. The former professional gardener cultivates a colorful year-round patchwork of perennials — from hyacinths and bleeding hearts to snowdrops and miniature roses — that she likens to a changing work of art just outside her doorstep. So when Van Eaton learned in June that the local housing authority would tear out most of her garden, she was stunned and saddened.

“I felt like I’m being kicked by a mule,” Van Eaton said. “Gardening here has been a good part of my salvation — it has been incredibly therapeutic.”

Van Eaton is part of a small group of residents fighting the stepped-up site enforcement by the Greene Metropolitan Housing Authority, or Greene Met, which owns and manages two contiguous public housing units on Lawson Place. Despite repeated appeals from residents, Greene Met plans to remove all excess vegetation from its properties on Oct. 1.
The 14-unit Hamilton Manor, built in 1965, and 25-unit Lawson Expansion, built in 1983, serve the elderly and disabled using subsidies from the U.S. Department of Housing and Urban Development, or HUD. Greene Met said it hopes that by removing excess plantings at Lawson Place, it will pass future HUD inspections and keep receiving federal subsidies.

“We’re trying to be proactive so we don’t run into problems with the inspections because our funding is so precious,” said Greene Met Executive Director Brenda Smallwood this week.
However, HUD officials said that the federal agency favors gardens and leaves it up to housing authorities to decide where they should be located. And Lawson Place residents contend that Greene Met’s use of HUD inspections as a reason for removing gardens lacks merit, pointing out that the housing authority received top honors from HUD this year following site inspections.

Earlier this summer Greene Met gave Lawson Place residents until July 1 to remove gardens outside newly-designated areas or they would be destroyed. Later, it extended the deadline to Oct. 1. Last week Greene Met sent Lawson Place residents maps detailing the 225-square-foot area around each residence where gardens can be planted. Outside of that area, any plantings would be removed to ensure plants don’t damage building exteriors and to make way for mowing. According to Smallwood, Greene Met doesn’t want to determine whether gardens are well maintained or not. Instead, a fair garden policy that gives each resident the same amount of space makes the most sense.

“We are not discouraging gardening in any way — it just has to be controlled,” Smallwood said. “If we can control where they plant, we can control how it looks.”

Residents, along with advocates who have banded together as “Friends of Lawson Place Gardens,” contend that the gardens have not caused the housing agency to lose points on recent inspections. This January during a site inspection of 21 Greene Met properties, including Lawson Place, no points were docked for overgrown/penetrating vegetation, resulting in Greene Met being designated a high performer by HUD, the highest honor possible. And according to a document from the Real Estate Assessment Center, or REAC, which officially carries out property inspections, inspectors are instructed not to dock points when vegetation intentionally is maintained and not adversely affecting structures.

“They don’t have a good reason for doing this, and every reason they’ve given has been a lie,” said Spencer Wells of the Cleveland-based Coalition on Homelessness and Housing in Ohio, a group assisting Lawson Place residents. “Just because it’s their property doesn’t mean they can ride rough-shod over people and not tell them why. In particular, a public agency isn’t allowed to abuse their authority.”

In addition, several HUD representatives said that their inspection policies are not designed to punish housing units with gardens. Brian Sullivan, a HUD spokesperson in Washington, D.C. said that the housing department learned about the Lawson Place issue because “the tail was being pinned on the HUD donkey,” but that, in actuality, HUD is “pro-garden.” In an email, Laura Feldman, a HUD spokesperson based in the regional office in Chicago, said that there are no HUD rules governing residents’ gardens or where they should be located. Instead, the housing authority, as the owner of the property, can decide.

Smallwood from Greene Met said she sees the designated garden areas as a compromise with residents, who agreed in their lease not to alter their property in any way without written permission from Greene Met. Another compromise is that Greene Met will establish a neighborhood garden behind the Lawson Place community building in 2013, Smallwood said.
“They have somewhat taken ownership in their own minds of the properties and that’s why we want to go this extra mile and try to compromise,” she said.

Some residents, however, don’t view Greene Met’s actions as a compromise, but as harsh and unreasonable. And, they said, each time they have reached out to Greene Met with suggestions, they have been given the cold shoulder. For example, earlier this month residents held a garden tour and invited the Greene Met staff and the agency’s five board members. No one from Greene Met came, though the event was attended by about 30 Yellow Springers.

In a response to the invitation, Smallwood wrote that Greene Met officials had more pressing housing matters to attend to. She added that board members in town were notified of the garden tour. Two board members, realtor Cecil Brown and Xenia Mayor Marsha Bayless, chose not to comment on the matter, while board chair Nancy Hadley of Beavercreek didn’t return phone messages.

“It feels like we’re not being listened to,” said resident and gardener Patricia High at the garden tour. “It was condescending that they said they have more important issues. They just think that we’re a nuisance.”

Van Eaton said that though she is incredibly grateful to Greene Met for providing her with housing, she has felt powerless and distraught by the way that Greene Met has handled the situation.

“We have not been heard or taken seriously,” Van Eaton said. “No one seems to have an awareness of how important these gardens are to us.”

To join in support of the Lawson Place gardens, contact Vickie Hennessy at 937-767-3901 or vichennessy@yahoo.com.