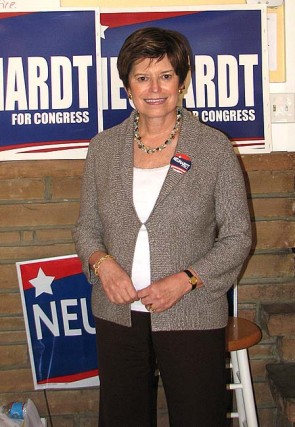 Sharen Neuhardt knows a thing or two about the American Dream.

The Yellow Springs business attorney, who is running for Ohio’s newly formed 10th district seat in the U.S. House of Representatives, understands just how much her middle class roots contributed to her success.

“I am a product of the American Dream,” said Neuhardt, who grew up in northwest Dayton, the oldest of four girls, and the first person in her family to go to college. “My dad was a Dayton police officer, and my mom stayed home until my freshman year in high school when she became a sales clerk at Elder-Beerman.”

“I went there on combinations of scholarships, student loans, and work study programs,” she said. “I am what the American Dream is supposed to be about. And the American Dream is the quintessential democratic ideal. It’s the promise to the middle class. It’s the hope of the middle class. I believe strongly in working families and providing people the same opportunities that I had growing up.”

Neuhardt’s goal is to become a new voice for the Miami Valley. She said her Republican opponent, former Dayton mayor and incumbent in the former 10th district, Mike Turner, has turned his eyes away from the Miami Valley and focused them far too long on Washington, D.C.

Neuhardt said the 10th district, which combines Montgomery and Greene Counties, and northern Fayette County, is one of only three truly competitive districts in the state. In terms of numbers, Montgomery County constitutes 75 percent of the vote, Greene County, 23 percent, and the part of Fayette County that’s in the district, 2 percent.
“So this is going to be a very, very tight race,” Neuhardt said. “This is not an election that somebody is going to win in a landslide.”

Neuhardt believes that the 10th district is one that all districts should look like.

“It’s a district that if you don’t do a good job you’re going to be out of a job in two years because the other party can step up and take the district back,” she said. “So it’s a good situation, and over time it will encourage good candidates to come forward and try to represent it.”

According to Neuhardt, in the last 10 years while Mike Turner has been in office, the Miami Valley has lost over 50,000 jobs. And on his watch, long before the economic downturn in 2007, the Miami Valley was really suffering.
“So is Mike Turner responsible for costing us 50,000 jobs? No. But he has to share some of the responsibility,” Neuhardt said. “And one of the things that I look at is that over the past 10 years I’m just profoundly sad about what’s happened in the Miami Valley. And I think most people aren’t too sure that it’s going to look any better in the next 10 years. But one thing I do know is that sending Mike Turner back to Congress for another minute isn’t going to change anything.”

If elected to Congress Neuhardt would seek to sponsor legislation that would help bring more jobs to Ohio and the Miami Valley.

“I believe that Ohio companies can compete well on the international stage if the playing field is level,” she said. “If you have China manipulating its currency, which is one of the ways the playing field is not level, that’s a big problem. Mike Turner doesn’t want to do anything about that. We have a great manufacturing base here, and we need to be working hard to expand that.”

Neuhardt, whose campaign is endorsed by the United Food and Commercial Workers international union, has clearly defined opinions on several key issues. With regard to education, Neuhardt is a strong supporter of public schools.
“I’m against vouchers because I don’t think the way you make our public schools stronger is by draining money from them in the voucher program,” she said.

“We also need to work hard in figuring out a way to make college affordable so that we don’t have our young people graduating with these huge mountains of debt that will take them 30 years to pay off.”

As a representative of the 10th district, Neuhardt intends to play an active role in supporting American military personnel and their families.

“This may be the first time in history that Wright-Patterson Air Force Base has been in the middle of one district — the new Ohio 10th district,” she said. “So whoever is representing Ohio 10 is going to have to be a strong advocate for the Air Force base. And I intend to do that.

“When you’re talking about the military and you’re talking about military families and veterans, just look back to how a lot of my generation and my parents’ generation got educated. It was the GI Bill. We need to provide for and do right by all of our veterans. As President Obama said, ‘It’s our sacred duty to take care of those who fight for us.’”
She said that being heavily involved with activities at Wright Patterson is going to involve her in a lot of issues that have a broader perspective outside the Miami Valley. And on some of those issues there are some big differences between her and Mike Turner. Neuhardt said her opponent has called for a measure that appropriates $100 million for the proposed East Coast missile defense system — a plan intended to protect the eastern United States from an Iranian missile attack and one that some House Democrats have derided as the “East Coast Star Wars fantasy base.”
“The Department of Defense doesn’t even want that,” Neuhardt said. “That’s a Cold War mentality.”

Instead of squandering billions of dollars on boondoggles, Neuhardt would prefer to spend the money wisely.
“I would rather allocate funds to Wright Patterson, where a lot of dollars are directed toward research and development,” said Neuhardt.

Although Neuhardt is a strong supporter of President Obama and the Democratic campaign platform, her primary goal is to do what is best for her constituents.

“I think I’m going to be my own person,” she said. “What I owe to voters is to make my good, independent judgment on what I think is best for the Miami Valley. For example, I am not going to be supportive of trade deals that cost Ohio jobs. That may be one thing where the president and I disagree. But I have seen far too many neighborhoods devastated — empty buildings, empty factories, people’s whole lives were ruined.”

Neuhardt said that because she is a business lawyer by profession, she intends to do things a little differently than her opponent.

Neuhardt said that if elected to Congress, for the first time in recent history Greene County citizens will be represented by a Greene County resident.

Although Neuhardt has her sights set on a seat in the U.S. House of Representatives, she becomes sentimental when reflecting on her life in Yellow Springs.

“I can’t think of an experience in my lifetime, other than going away to college for the first time and seeing what life was like outside of Ohio, that has been as enriching for me, my husband and our kids as the last 18 years in Yellow Springs,” she said. “I am so grateful for everything the community does for me.

“The other day I went down to the field office and there sat five or six people from Yellow Springs stuffing envelopes. There have been people down there from Yellow Springs who have been phone banking because they care so much.
“And that’s because Yellow Springs people are vocal. They understand what is important. And they genuinely support people they believe are trying to do the right thing. I’ve listened and learned so much from the people of Yellow Springs. I’ve been enriched so many times over. So I say to Yellow Springs, ‘Thank you! Thank you!’”

And if Neuhardt does succeed in her bid for Congress, there is one thing she wants everyone to know:

“I will work day and night to restore jobs and the American Dream for the families in the Miami Valley.”

* Jeff Simons is a freelance writer for the Yellow Springs News.

One Response to “Neuhardt’s American Dream”