Brandon Lowry
After working for six years as a health inspector in Greene County, Brandon Lowry decided three years ago that he’d been in enough schools to know that what he’d really love to do is teach. With an occupational background in chemistry, he went back to school to become a science teacher. He taught his first biology and physics courses at Shawnee Preble High School last year, and came to YSHS this year to teach chemistry and physics.

Lowry got his first taste teaching as a health inspector and member of the technical committee of the Ohio Environmental Health Association, for which he taught computer courses and food safety courses for professionals in the field. He plans to pull some of his work experience into the high school chemistry lab, having students test the pH of different foods and perform tests using household cleaners. Having organized the science fair at Shawnee last year, he also hopes to initiate bigger team projects with a slightly competitive edge. One possibility is to have teams of students construct lava lamps using candle maker’s wax, brake parts cleaner, and canning salt, and then have others pay to vote on the best one, donating the proceeds to a charity of the winners’ choice.

Lowry grew up on a wetland farm along Massie’s Creek just west of Cedarville that is now part of the Tecumseh Land Trust. He and his wife just had a daughter over the summer. The family returns to his parents’ farm, Highland Point, whenever they need a break from the grind.

Nancy Beers
The smell of a public school is like home to Nancy Beers, who as a child often accompanied her father to work at his job as teacher, principal and later superintendent of a district near Columbus. Three of her siblings went into education, and after staying home to raise her four children, she did what came naturally by entering the education field herself. She joins the administrative team this year as the new assistant principal of McKinney/YSHS. 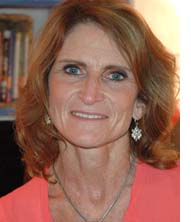 Beers has always felt she related well to youth. After earning a master’s degree in counseling in 1996, she worked as guidance director at Bellbrook schools for 10 years. She worked for several years at Fairborn City Schools as supervisor of gifted services and Project Lead the Way Ohio, a STEM, engineering and biomedical sciences education network. Beers recently earned her Ohio principal license, and having supported her children’s collective 39 varsity sports careers at Bellbrook High School, she is currently working toward certification as an athletic director.
As assistant principal Beers expects to engage with students regularly and help them by being kind, loving and firm, she said. McKinney initiated a pilot positive behavior for learning approach last year, and she hopes to engage in solution-based problem solving, focusing particularly on seniors, who set the tone.

“I believe in the saying, as the senior class goes, so goes the school,” she said last week.

She was already getting to know students last week, as two high schoolers stopped in front of her office to ask about the photographs of the Vatican and Mont Saint Michel hanging on her wall. She had taken them, she told them, while traveling in Europe with her family. They were impressed.

“I think I can make a positive difference in kids’ lives,” she said.

Karleen Materne
Art teacher Karleen Materne wants to help kids dig deep to get into what she calls their “art brain.” New this year to McKinney school, she has plans to create a strong foundation in the basic art concepts and skills they can use to create high level work as they mature. 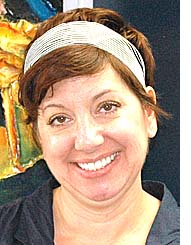 Though her foundation is in painting and ceramics, Materne is interested in delving into new art fields, such as photography and film. She taught art classes to youth and adults at Green Lion Studio, which she opened 15 years ago, and now runs out of her home in Springboro. She also taught art for 14 years at Madd River Middle School and in the Sycamore schools in Cincinnati.

With artists in her family and a background in music, Materne has lots of ideas for how to work across the curriculum to create a strong arts program in the district. She hopes to help organize a school-wide art project on the theme of hunger, possibly a tile mosaic. Before the year is over Materne also hopes to have inspired a student yarn bombing somewhere in town.

Cameron McCoy
Teaching in Yellow Springs is Cameron McCoy’s dream job, he said recently after his first week of school as a McKinney social studies teacher. McCoy whet his chalk in the Columbus City Schools for two years before teaching at a charter school last year in an underserved area of the city. It was a challenging first experience and one that makes him very grateful to now be in a community that is able and willing to support and be involved in its schools, he said. 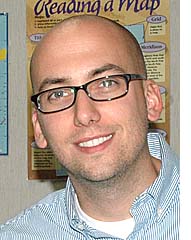 McCoy is excited to get into the material this year, which will focus largely on world history. McCoy hopes to engage students through projects that will help them apply the past to their current lives. For example, students this year will be able to create their own countries, choosing a location anywhere on the globe and specifying the landscape, resources, population and government. When the class gets to the unit on the U.S. Constitution, students will get to make up their own Bill of Rights for their countries.

“It will get them to think about what’s important to them and maybe why our Bill of Rights is so important for us,” McCoy said.

That unit could be taught in concert with the school’s language arts and art curricula, which will allow students to engage in learning through the discipline and communication style most comfortable to them, McCoy said. He also hopes to collaborate with seventh-grade math and science teacher Jack Hatert on a unit on feudalism and catapults.

McCoy grew up on a farm in Newark, Ohio, and has always loved the outdoors and had an interest in building (his father owns several hardware stores east of Columbus.) His grandmother, sister and step-mother are all teachers, and he became one too “to be involved and hopefully make in impact,” he said. As a drummer, for instance, McCoy thinks that a student bucket band would be cool.