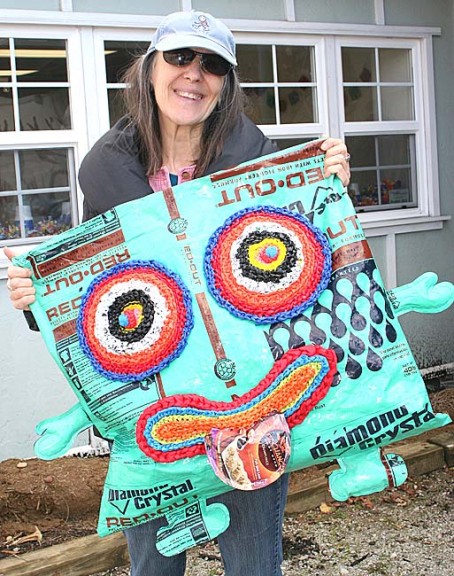 Sondi Kai holds part of Brain Augmentation, a piece in her art show ‘Reincarnated,’ which opens at the Yellow Springs Arts Council gallery this weekend. (Photo by Suzanne Ehalt)

A whimsical rebirth for trash

“I’ve had so much plastic surgery, when I die they’ll donate my body to Tupperware.”—Joan Rivers

In a memorable scene from the 1967 film “The Graduate,” Walter Brooke pulls a young Dustin Hoffman aside and offers some fatherly advice: “I just want to say one word to you…Plastics.”

More than 40 years later, the world is smothered in it. These days it’s almost impossible to find any household item that doesn’t contain at least a smidgen of plastic.

There is, of course, a big downside. Every day, millions of tons of the stuff ends up as trash, piling up in landfills, littering highways, and clogging rivers and streams. And month after month, a mother load of the planet’s plastic detritus converges with the Great Pacific Garbage Patch, a humongous flotilla of synthetic polymers the size of the continental United States.

But there’s also an upside, one that local artist Sondy Kai will display at the opening of her exhibit, “Reincarnated: The New Forever Life of Plastic,” which opens this Friday at 6 p.m. with a reception at the Yellow Springs Arts Council Gallery, located at 111 Corry St. DJ Rev Cool will provide the music, and Kai and her associates will be adorned in plastic costumes. She invites all those attending to show up “plasticized,” in favorite plastic fashions and accessories.

Her show, which runs through Dec. 9, features an array of colorful and bizarre looking “creatures” composed of post-consumer plastic trash. Her creations — a testament to her artistic ingenuity and commitment to promoting environmental awareness — are at once amusing and thought provoking. Her exhibit offers a peek into just how deeply our consumer driven society is wallowing in a sea of plastic junk.

Kai’s pieces — such as “Liposuction Gone Bad,” “Hairball with Cowlick,” and “Mr. Happy with Sirens” — were created with trash she’s collected from around the Miami Valley and the country. Some of her recycled trash includes WalMart shopping bags, Starbucks coffee sack liners, and those disposable blue plastic wrappings that protect the daily deliveries of the Springfield News-Sun and Dayton Daily News.

Kai, who grew up in the Dayton area and graduated with a degree in fine arts from Wright State, began her foray into “trash art” back in 2009 when she discovered a colorful discarded chip bag with a foil interior.

“When I first got into this, I started getting trash from family members and friends,” Kai said. “I asked them to save all their garbage for me.”

Whether or not it was destiny, Kai was inspired to put her talents to the test. And over the next three years, from the east coast to the west, she sifted through a plethora of junk plastic and Styrofoam strewn along interstates, city streets, and dirt roads in New Mexico.

“I drove up and down the highways picking up trash, going through parks, and just about anywhere — anywhere I was driving,” she said. “I just started focusing on trash. When I was driving, all I was seeing was trash.”

One of her more memorable finds was right here in the Miami Valley.

“I was driving on I-35, right in the heart of downtown Dayton and I saw this fabulous and huge piece of orange trash,” she said. “And it was right against the concrete divider that separates the east and westbound lanes. I realized that the only way I could get it was to come back at four in the morning because I would have to run across three lanes of highway.

“And that’s what I did. And believe it or not, it was a Brink’s bag from a Brink’s truck. It was plastic and apparently at one time held money.”

That bag, turned “Brinks All Seeing Eye Records Play Money Heist,” is one of the “creatures” displayed in her upcoming exhibit.

During the 1980s and 1990s, Kai worked as an artist and environmental activist in California, Washington and New Mexico. And while there, she produced art using indigenous plants and found botanical material.

“When I was in New Mexico I was doing spiritual artwork,” Kai said. “I would cut Artemisia (sagebrush) and make altar baskets…I would go into the Cascades (the mountain range running through Washington) and pick up lichens and weave dolls. I also used the mosses that grew on trees.”

Her upcoming exhibit, which occurs in conjunction with the Third Weekend Fling, has a two-fold intent.

“The first one is for people to just get a laugh. These pieces are absurd. They’ll make you crack a smile. I want people to lighten up, to have fun, to put on some plastic.

“The second thing is to bring awareness about what’s happening in the world and about something we don’t attribute much value to — and that’s plastic.

“We buy things every day in plastic packaging. It’s used for a couple of minutes to get things from one place to another, and then it goes in the trash. And it ends up anywhere. It’s in our streams, in our watersheds. And the U.S. and China are the biggest users.”

For Kai, her work as an artist and environmentalist are inextricably linked. After graduating college she interned with a municipal program called City Beautiful in Dayton, where she helped create a community garden on the north end of the city. Later, in California, she worked with environmental groups to raise public awareness about clear-cutting in forests throughout the state.

These days, while so many people are struggling just to get by, they’ve unfortunately lost their connection to nature, Kai said.

“But at the same time, we have all these plastic bags and Styrofoam cups that don’t even biodegrade and end up tossed out the car window or in a landfill,” she said.

“We’re basically a corporate culture where we consume, consume, consume. So we’re going to have waste. And the waste system is part of the corporate structure because they very quietly take it away for you. But they want you to keep buying more and keep making more trash.”

With that, Kai holds some strong views about how we as a society deal with the problem of waste.

“People have to worry about trash because manufacturers won’t take responsibility for the products they make,” she said.

Citing the “Keep America Beautiful” campaign that began in the early 1950s, Kai said the idea was conceived by corporations to pressure the public to deal with the trash those industries produced.

“They didn’t assume any responsibility for that,” she said. “They’ve been making all these products that create trash, but it’s the consumer’s responsibility to deal with the problem, to pay for it and to clean it up.

“From beginning to end, there needs to be a long-term plan for what we’re putting into the environment. For sustainability, that’s how it has to be.”

Despite the underlying intent to raise awareness about waste, Kai said that her exhibit is intentionally playful.

“And that’s because the message doesn’t come across if you’re too serious, too doom and gloom. Even though it’s a serious issue, the presentation can be fun.”

For more information about the YSAC shows, contact Brian Housh at 937-679-9722 or brianhoush@gmail.com.