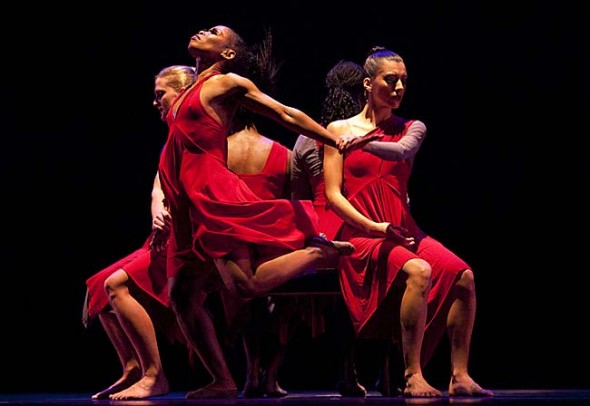 Dayton native Sheri Williams, a long-time member of the Dayton Contemporary Dance Company, is the subject of a short documentary by filmmakers Julia Reichert and Steve Bognar. The film has its state-wide premiere in Dayton this weekend. (submitted photo)

To be a dancer with an African-American dance company in the Midwest is not your everyday occupation. To also be 49 and still performing with that company is astonishing. To have suffered a critical injury and attempt to come back at that age, with that company, is the gripping story of Dayton Contemporary Dance Company’s Sheri “Sparkle” Williams. A short film, “Sparkle,” by local filmmakers Julia Reichert and Steve Bognar, will have its Ohio premiere in Dayton this week.

The film opens with Williams leaping through a tangle of color and light on a stage she is obviously used to commanding. Her small, strong stature says a lot about a woman who found dancing harder to give up than doing the work to keep in shape well beyond the age of most professional dance performers. Her smile alone has enough energy to fuel the entire company she trains and has performed with for an unprecedented 40 seasons.

But no body is infallable. During a performance one night, she dislocates her hip on stage, and does everything in her considerable power to hold it together until her exit, where she collapses to the floor. Though her effort to heal is as dedicated as the rest of her life, she must face the possibility that she may not perform again. And ultimately it is the responsibility of DCDC artistic director Debbie Blundon-Diggs to decide whether or not to send Williams back on stage.
As a stand-alone short film, “Sparkle” has already won acclaim, sharing an audience award at this year’s SilverDocs Film Festival with the short “Trash Dance.” And “Sparkle” will also have its Ohio premiere this weekend in Dayton at a special event on Friday, Nov. 2, at 7 p.m. in the Renaissance Auditorium of the Dayton Art Institute. The evening features the world premiere of a piece by modern dance choreographer Rodney A. Brown, followed by a performance by the DCDC, and a discussion with the filmmakers and Blunden-Diggs.

Williams has an exceptional passion for what she does, and that drive singled her out as one of the subjects of three documentary films produced by the Corporation for Public Broadcasting about everyday people doing extraordinary things in their communities. ‘Sparkle’ will join two other short films, one about former rock star Wayne Kramer’s effort to rehabilitate prisoners through music, and an 85-year-old doctor who decided to write a symphony, when they air as a pilot series on PBS at a date to be announced.

The film was shot between January and March of this year, and according to Bognar in a recent interview, it was the most fun he and Reichert have had making a movie.

“It was so amazing going to work and spending the day watching angels float across the floor,” he said.

Though audiences in the area know the DCDC, they might not be aware that the hometown company is also known around the country for its powerful performance, educational mission and history rooted in the African-American experience. Dayton native Jeraldine Blunden founded the company in 1968, and it is now the oldest modern dance company in Ohio. The current season, known as Frameworks, celebrates Blunden-Diggs’ 40th anniversary with the company founded by her late mother.
As well as a storied history, the company clearly has talent. Many of the dancers come from companies in New York and Chicago. And Williams herself has won many awards, including the renouned “Bessie” — formally known as the New York Dance and Performance Award.

“One of the reasons we’re so excited about the film is we’ve fallen in love with this company,” Bognar said. “The DCDC has a national reputation within the dance world, but here in Dayton, we hope to remind people that this is a nationally respected dance company in our backyard.”