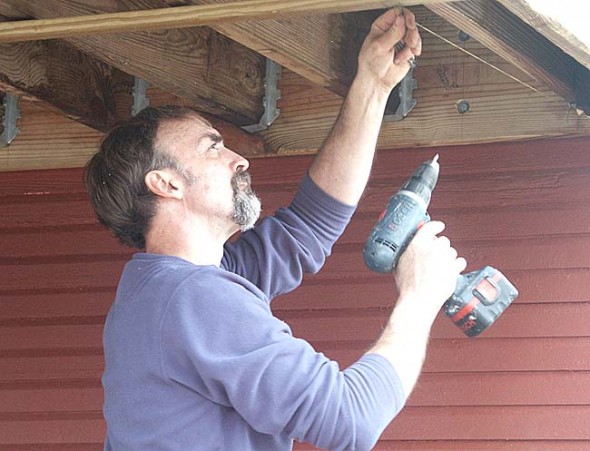 Faith Morgan and Pat Murphy of Community Solutions are completing a new film, A Building Revolution: The Super-insulated Passive House, about ways builders and engineers around the world have developed to reduce home energy use by 80–90 percent. The film features local builders, such as Chris Glaser, above, working on a deep energy retrofit of the carriage house behind Community Solution in 2008. (Submitted photo)

When Pat Murphy came to Yellow Springs in 2003, he said he could build a house that operated with 50 percent less fossil fuels than a conventional home, but his partner, Faith Morgan, didn’t believe him. Now, 10 years later, the couple is wrapping up a new film about homes built in Yellow Springs and around the country that use 90 percent less energy to heat and cool than conventional dwellings.

Given that worldwide, home energy use is the single biggest energy demand and the number one contributor to the climate change that is slowly destabilizing the planet, a 90 percent reduction in home energy consumption is something to talk about. And the couple hopes that their film inspires not just talk but also action by changing the way we build in America.

A Building Revolution: The Super Insulated Passive House is a guide to the methods that builders, architects and homeowners around the U.S. and Europe have used to drastically reduce home energy consumption. The movement isn’t new, and neither are most of the construction practices, which, as the film states, were first employed in the U.S. and Canada in the 1970s when the first energy crisis reared its head, threatening greatly increased home heating and cooling bills. The change was short-lived, waning in the 1980s, about the time the White House removed the solar panels former President Jimmy Carter had placed there as an active symbol about the direction he felt the country needed to go on energy, Murphy said.

But innovations in home energy reduction continued in Europe, leading the Germans to develop what they called the passive house, a building so tight and well insulated that it needed no active mechanism, such as a furnace or heat pump, to maintain a comfortable temperature all year round. Now, some 30 years after the initial steps, the U.S. is again recognizing the need to conserve energy. Beyond world peak oil production and deeper into climate change, the timing couldn’t be better, according to Murphy. He believes that the methods are not only known, but very doable for people at every economic level. And the film is one way to show more people that it is both possible and affordable to build passive homes.

“We have good news, we now know how to do this,” Murphy said. “We know this can work!”

Morgan and Murphy came to Yellow Springs in 2003 to refocus the Community Solutions group started by Morgan’s grandfather, Arthur Morgan, on the energy crisis they believed was one of the world’s chief concerns. They organized the country’s first few peak oil conferences and have spent the past 10 years meeting and talking with builders, engineers and leaders around the world about how to mobilize communities to manage their energy needs.

And with them all along they carried a video camera.

Morgan captured footage from conferences, workshops, building sites and interviews with people involved in developing a cost-effective way to build energy efficient homes. Much of the film was shot right here in Yellow Springs, where both residential and commercial builders have developed their own ways to approach the passive house standards. And several homeowners in Portand, Ore., Duluth, Minn. and Urbana, Ohio, talk about the designs they used and the reasons why they chose to commit to the passive house. Morgan also interviewed Passiv Haus Institute Director Wolfgang Feist, Katrin Klingenburg, who started the Passiv Haus Institute U.S., and University of Dayton physicist Bob Brecha, all of whom are convinced that housing is the central solution to reducing the world’s carbon emissions. The voices of these contributors is loud and clear.

“The energy situation in the world is blatently unsustainble,” Feist says in the film. The International Energy Agency says what the world needs is “an energy revolution.” And according to Pat Murphy in the film, “it’s going to require a war-time effort, where citizens accept it and see it as a survival question.”

Building a passive house is less complicated than it sounds and doesn’t cost that much more than a conventional one, according to the film. The key elements are thicker, better insulated walls, floors and ceilings, and a tighter envelope to prevent air leakage. Those are methods local builder Jonathan Brown in the 1970s called “lean framing.” Including these elements, plus efficient windows and an energy recovery ventilator, adds about 10 percent on to the cost of new construction projects. To retro­fit an existing home to the same energy standards, the cost is typically about half the cost of the original construction price.

But there is an unheralded cost advantage to energy efficient homes, which is the greatly reduced heating and cooling bills. Local builder Andrew Kline was interviewed while building the first passive house in Yellow Springs in 2010.

“This house is going to cost $100 a year to heat and cool,” Kline said. “I think that’s a pretty powerful statement.”

The long-term savings that energy efficient buildings can provide can offset and exceed the building costs, which makes energy efficiency an investment for not just homeowners but for businesses as well.

“Corporations are still fighting it because they can’t figure out how to make the shift,” Murphy said. “But it’s actually an investment in their operation.”

A Building Revolution has been funded by Kickstarter, an online tool for pooling investors to support creative projects. The film’s initial goal of $20,000 is just $2,000 short of being reached by the deadline of Dec. 11. Donors interested in giving can go to http://www.kickstarter.com and search for the film.

The filmmakers, including local videographer and film editor Eric Johnson, hope to complete the project by the end of the year and premiere it at the Little Art Theatre in early 2013.

The housing crisis has made big news across the country in the last five years. It has been a more immediate concern than many other crises, including energy use and climate change. But the solutions to all three problems are closely tied to each other, according to Morgan and Murphy. They hope their film will help shift the consciousness toward more efficient building practices, so that extra thick walls, super tight envelopes and high quality windows and doors becomes the new convention.

“The film is a tool people can use to get there,” Morgan said. “We have a positive outlook for what can happen in the future, and we’re hoping the film will help inspire people.”