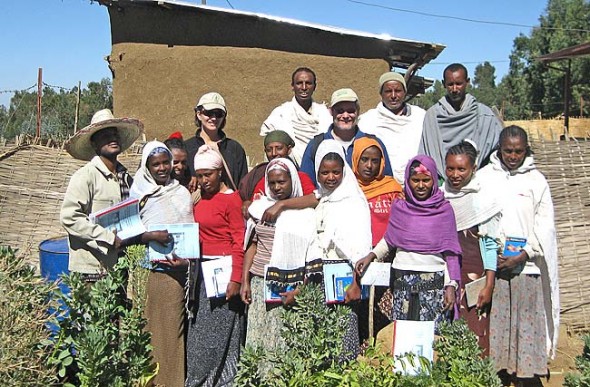 Andy Carlson and Jessica Bilecki stood in a garden they helped grow with a group of villagers in the Kossoye region of Ethiopia in order to improve the village diet. The two Yellow Springs residents are part of the Kossoye Development Project, initiated by Carlson’s father Dennis Carlson with the University of Gondar in the 1960s to improve the health and longevity of the region’s people. (Submitted photo)

Yellow Springer Andy Carlson recalls with fondness his childhood home in Ethiopia. Growing up with missionary parents in the eastern part of the country, Carlson lived in a colonial Italian mansion that, he remembers, “had a fabulous garden. There were lemon trees, banana trees, all kinds of things.” So he was surprised when, during a trip to Ethiopia decades later, he was unable to find seeds.

“I had a terrible time — it took me two days to find them,” he said in a recent interview.

He was searching for seeds because it occurred to him that gardens might be an effective way to combat the malnutrition that affected many of the villagers living in the western highland region of Kossoye. Carlson was originally in the area to conduct research for a book he was writing with his father, Dennis Carlson. The two had been asked by community leaders to provide input and assistance in addressing a variety of health issues in the area. While Carlson’s father (a professor of public health) collaborated with community health workers to tackle some of the issues, such as parasites and trachoma, the problem of malnutrition continued unresolved. And although Carlson, a history professor, had little to offer in the way of medical expertise, as a resident of Yellow Springs and a life-long gardener, he noticed that something was missing from the houses and compounds of Kossoye: gardens. “The households are just really bare” he said. “and the cultivation of indigenous plants has fallen out of use.”

And so began the search for the seeds that eventually led to the creation of the Kossoye Development Project. Working in conjunction with the University of Gondar in Ethiopia, the Kossoye Development Project’s mission is to “assist the people in Kossoye, the surrounding area, and Ethiopia at large in its efforts to improve health, lifelong learning, and food security.” Project organizers hope to do this by providing villagers with the training and basic tools necessary to cultivate home gardens. Because the food culture of the Ethiopian highlands is primarily based on grain and livestock, the enterprise requires much more than the distribution of seed packets and watering cans. Each village that invites the Kossoye Development Project into its area creates a health council, which lends legitimacy and leadership to the project. There are demonstration gardens, Great Gardener workshops, field supervisors and an illustrated gardening manual to support the project’s goal to “institutionalize vegetables into the food culture.”

The benefits of this goal are already being seen. According to the project’s data, girls with home gardens grew an inch within just two years of starting the gardens. In an area where persistent malnutrition has resulted in widespread stunting in children, such a development is particularly exciting.

Additionally, home gardens can be an important tool for empowering women, since it ensures their access to fresh food while providing a potential source for extra income. Although approximately 1,000 gardens are already under cultivation, the project is aiming for 50,000. Now involved in talks with political leaders in a region with a population of 400,000, the Kossoye Development Project seems well on its way to achieving that objective.

Unlike many development projects, which are funded through international aid agencies and simply implement the technology du jour with little input from the target community, the Kossoye Development Project is actually under the ownership of the University of Gondar and counts on the involvement of many of the university’s faculty and students, Carlson said. While this approach requires a lot of “patience and personal politics” according to Carlson, the end result is worth it.

“There is a long term benefit for the country” he said, noting that even though all of the project’s board members live in the United States, “if something happened to us, the work would continue without us.”

When discussing the board, Carlson emphasizes the educational nature of much of their involvement.

“Essentially we’re teachers,” he says, and one of their primary roles is to create the curriculum that is used in the training workshops. Since much of the information that can be found online promotes the use of pesticides or GMO seeds, the project provides its own training material which can be used during workshops or presentations in the highland communities. Additionally, all of the board members travel to Ethiopia to experience firsthand what cultivating an Ethiopian garden entails and gain a better understanding of what the project looks like on the ground.

In terms of funding, 85% of the organization’s funds are provided by private donations. Although the Kossoye Development project is eligible for grants due to its 501(c)(3) status, the board tends to avoid them because, in Carlson’s words, they can cause “mission drift,” with many grantors advocating inappropriate, high technology solutions. By contrast, the Kossoye Development Project emphasizes “appropriate technology and appropriate food culture” and a full 95% of the organization’s budget is spent in Ethiopia, thus maximizing the project’s ability to accomplish its mission.

Those interested in supporting the project should contact Carlson or consider attending the project’s annual reception, held in Yellow Springs each September. At the most recent gathering, over 70 supporters came out to enjoy an Ethiopian meal and learn about the project’s developments. Carlson is also in the process of organizing a trip to Ethiopia for supporters during the summer of 2013.

Reflecting on his own process of creating the project, Carlson says “I got involved one step at a time. I’m not a missionary-minded person but I found it ethically compelling”.

Considering that in many ways the Kossoye Development Project is a “living laboratory for thinking of new models of development” and he hopes that other villagers might feel the same.