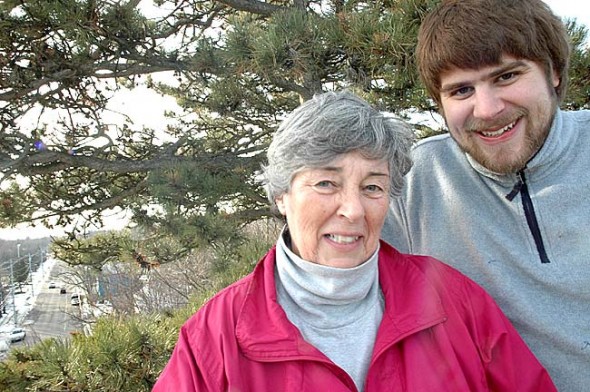 Yellow Springs Tree Committee members Anna Bellisari and Robert Gage enjoyed a rare view of Dayton Street and beyond from the height of a bucket truck last week. They went to the upper stories of an unusually strong and resilient Austrian pine to get clippings they will use to reproduce and potentially commercialize. (Photo by Lauren Heaton)

Pining for a resistant strain

Village resident Robert Gage doesn’t relish heights, but even hovering at 70 feet in the air last week, he appeared less concerned with the drop than with the fertility of the newest shoots he was clipping off the upper branches of a pine tree on Dayton Street. The tree is a robust and comely model of the Austrian pines that have suffered the onslaught of a vengeful tip blight in the midsouth United States. And Gage, along with the Yellow Springs Tree Committee, is hoping to capture the genes of the one or two pines in Yellow Springs that withstood the disease, and reproduce them.

“This is my favorite tree in Yellow Springs,” Gage said, explaining that its grand stature and its mosaic of cream, tan and chestnut brown plates along the trunk are unique and quite beautiful.

And if indeed the tree has survived long enough to grow to its 90-foot height and 3-foot diameter because it is resistant to tip blight, its reproduction should be supported.

“If the blight can be born out through innoculation for a resistant strain, it would be a valuable tree for the village and also popular in the trade,” Gage said.

So last Wednesday, Enoch Rice, of Enoch’s Tree Care, drove his new fire rescue truck to the Bahá’í Center property on Dayton Street where the Austrian pine is located and lifted Gage up to collect some healthy samples for the grafting project. Rice, who loves trees but often gets paid to cut them down, was asked to fell a second Austrian pine on the same property several decades ago. It looked the same or bigger than the one they took samples from last week, he said, so he was happy to support any effort to propagate more of the majestic tree, the likes of which he doesn’t see much in the region.

Anna Bellisari of the Tree Committee was there as well, documenting the group’s second attempt to graft and propagate a tree that has done well in the village. Previously the Tree Committee propagated the large sycamore tree in front of the Highlander Laundromat. According to YSTC founder Lloyd Kennedy, the tree was a particularly hardy specimen with lovely white bark that reached “all the way to the top of the tree,” he said last week. The graft worked, and the group named the tree YSTC1 and put it into circulation. It never took off commercially, but according to Kennedy, customers can still find it for sale from a grower in Champaign County.

If the graft from the Austrian pine works, Gage hopes to call it YSTC2. He gathered about 25 clippings, most of which he plans to take to a retail operator in Galena who completes about 7,000 grafts per year. The starts will be propagated onto a Scotch spruce, and the new growth will be 100 percent genetically identical to the Austrian pine on Dayton Street. (Gage also plans to try grafting a few of his own, where he lives at Whitehall Farm.)

Kennedy is hopeful that the graft will take and that the village can benefit from a source of Austrian pines that will grow and last. He knows of dozens that were planted around the village, all but four of which have been killed by tip blight.

“If these trees are Austrian, they’re certainly resistant to tip blight, and this strain doesn’t seem to be in commerce,” Kennedy said, basing his assessment on 35 years in the business, 30 more in local practice and 90 years of living and observing. “We’re going to try to get it out there so we can have Austrian pines, which are about the prettiest tree you can grow. They’re a nice dark color with a symetrical shape. The key is do we have a resistant strain or not?”