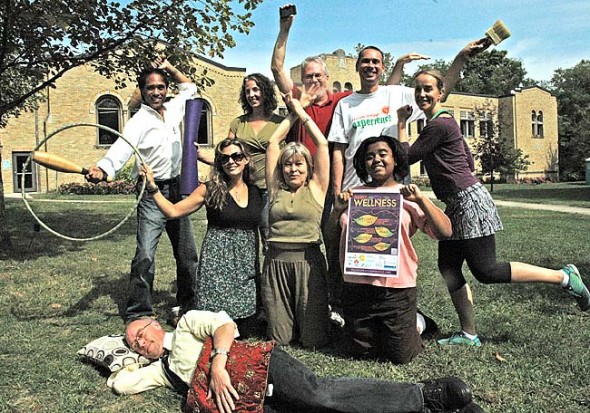 Lots of love in the village

The village launched 2012 with lots of love during its first ever “Love-in” weekend in February.

For the event, sponsored by Yellow Springs Experience and the Yellow Springs Arts Council, the village embraced its “hippie” image with events modeled on the late ’60s emphasis on music, peace and activism.

The streets rang out with music and peaceful protesting, and villagers came out to participate in the popular public performance piece, “The Kiss,” in which participants gathered around town at designated locations, and shared a kiss with partners, including mates, children, animals, teddy bears and more, all at precisely 3:27 p.m.

Controversy reared its head at St. Paul Catholic Church in the spring, when Father Anthony Geraci delivered in his homily what some perceived as a comparison between the Obama administration and Nazi Germany, around the issue of a federal proposal that would require religious institutions to include contraceptives in their health insurance coverage for employees. The controversy, during which some church members left the church or publically complained, led to a new dialogue in the St. Paul church community.

In May, in separate but coordinated moves, Rev. Derrick Weston was hired as the new pastor of the First Presbyterian Church, as well as the new director of Antioch College’s Coretta Scott King Center for Cultural and Intellectual Freedom. The Pittsburgh native came to the jobs with aspirations of advancing efforts in the realm of social justice, which seemed a fit for both the values of the college and of the church. 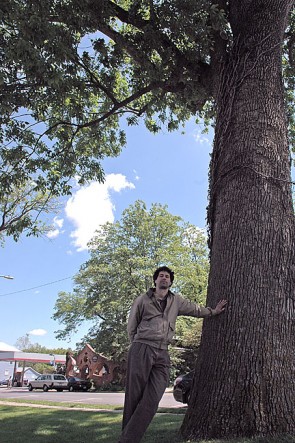 This spring local tree experts, including Glen Helen Director Nick Boutis, above, alerted villagers that the Emerald Ash Borer is in the village and property owners should either cut down or treat their ash trees, which will otherwise die within several years. At the end of the year, the Village had begun cutting down some trees on public property. (News archive photo by Diane Chiddister)

Village ash trees got a bad prognosis this year: if they aren’t already infested with the Emerald Ash Borer beetle, they will be soon. And within a few years, they’ll all be dead unless the community takes quick action in treating them, according to local experts.

Residents of Lawson Place apartments were informed in June that they would have to remove or transplant most of their gardens and plants, or they would be removed by the Greene Metropolitan Housing Authority, or Greene Met.

Greene Met leaders said the housing authority needed to improve its score on annual inspections from HUD or it would face the loss of federal subsidies.

Lawson Place residents and community members who banded together as “Friends of Lawson Place Gardens,” rallied around the gardens, maintaining that they were mature and well-cared for and an important part of their homes and lives. Residents were originally given a deadline of July 1 to remove their plants which, after strenuous appeal, was pushed back to Oct. 1.

Hot summer in the village

But the hot weather affected more than just people: the heat compounded the influence of drought in the area, risking the loss of large numbers of corn crops, and resulting in low wheat harvest yields.

In June, the Yellow Springs Community Council learned that its annual funding through United Way of Greater Dayton had been cut from about $16,000 down to $700 for the 2012–13 and 2013–14 fiscal years. United Way provides 88 percent of YSCC’s annual revenue, and this year’s sudden cut makes it difficult for the local donor organization to meet the needs of local recipients for the remainder of the year. But YSCC committed 100 percent of its reserve funds of about $9,000 to meeting its obligations for 2012. The cuts affected a myriad of small organizations in Yellow Springs that the Community Council helped fund, including the Home Assistance Program, the Food Pantry, the Sea Dogs, the Riding Centre and the Yellow Springs Youth Orchestra.

To honor the community that it has funded for 38 years, the Yellow Springs Community Foundation threw a party for all Yellow Springs and Miami Township residents in early September on the Mills Lawn grounds, complete with a cookout, games and live music.

The incident elicited protest from some villagers, who expressed concern about the health and environmental impacts of pesticides, while county and state health officials defended their use.

There were no reports of villagers having contracted the virus.

Alyce Earl Jenkins was inducted into the Greene County Women’s Hall of Fame in September. Jenkins, who has lived in Yellow Springs for 50 years, was honored for work in the field of rehabilitation counseling, which is focused on helping those with physical and mental disabilities find work. Jenkins is the 26th villager to be inducted.

In October, Ellis Park was rededicated as Ellis Park and Lloyd Kennedy Arboretum, honoring Kennedy for his many years of service to the community as a planter and champion of trees of all sorts. Kennedy, who turned 98 this year, is a founder and key member of the YS Tree Committee which, since the 1970s, has planted a wide variety of trees in Ellis Park.

Yellow Springs witnessed its share of the election action this year, with a few of its own in the race.

In January, local resident Sharen Neuhardt announced her intention to bid as a Democrat for a seat representing Ohio’s new 10th district with the U.S. House of Representatives, which was recently redistricted. Neuhardt won the primary election but lost to incumbent Mike Turner in November.

Another Yellow Springer, Democrat Jeff Robertson, threw his hat into District 10’s ring, going up against Republican incumbent Chris Widener for a seat in the Ohio Senate. However, Robertson lost to Widener in November.

As Election Day drew nigh, Young’s Jersey Dairy played host for an afternoon to Paul Ryan, Republican candidate for vice-president, with an event that drew 2,000 spectators. But when the results were in, Yellow Springers had done their part to help carry Ohio for Obama, voting for the president by a wide margin.

The popular village underground breakfast spot run by Norah Byrnes was voluntarily shut down in December. Byrnes had been serving breakfast to friends and neighbors from her home on Walnut Street five days a week for a year-and-a-half, free of charge. However, after receiving several complaints, the Greene County Combined Health District and Village government met with Byrnes and her attorney, prompting the closing, due to zoning code violations. However, through her attorney Mark Babb, Byrnes said she might re-open.