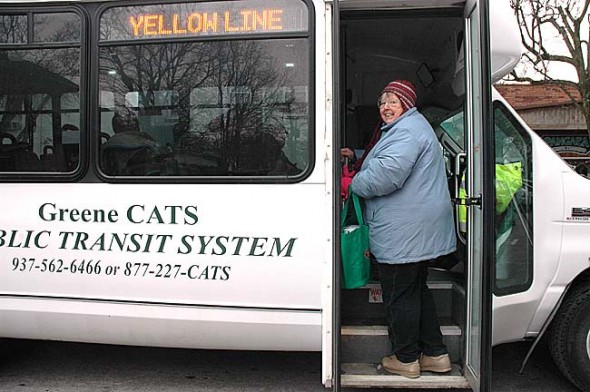 Barbara Mann, transportation coordinator for the Senior Center, hailed down a Greene Cats Yellow Line bus in front of Tom’s Market on Monday, its first day of service to the village. The bus will come through town several times a day, taking riders to Xenia or Fairborn, where they can change to other buses that go to Dayton or Beavercreek. Bus schedules are available at the library, Senior Center and Village offices and on this site. (Photo by Diane Chiddister)

To Xenia or Fairborn, via bus

When Barbara Mann wanted to ride a bus this Monday morning, all she had to do was step off the curb in front of Tom’s Market and wave down the little white bus coming toward her. The bus stopped and Mann stepped on, paying a quarter for a trip to Xenia and back.

“I’m a big fan of buses,” Mann said in an interview last week. “I’m getting to the age where I like someone else to drive so I can read or watch the scenery. It’s a thoroughly enjoyable way to get back and forth.”

The bus Mann rode, the Greene County CATS Yellow Line, was in its first day of operation as a flex bus service in Yellow Springs. The bus will pass through the village 16 times a day during its 90-minute loop between Xenia and Fairborn. (The Yellow Line schedule is available at the library, senior center and Village offices, as well as online at http://www.co.greene.oh.us/greenecats). While the county agency has in the past operated a demand-response bus system, meaning that people needed to make a reservation for a ride at least two days in advance, this is the first time CATS has offered a flex route service to the village.

A flex route is like a fixed route but more flexible, according to Greene County CATS County Mobility Manager Bryce Bookmiller this week. That is, the bus has regular stops in Yellow Springs — in front of the library, at the Village building and on Dayton Street just south of the E. Enon Road/Dayton Street intersection near Antioch University Midwest — but it also has greater flexibility. For instance, the bus can deviate off the route up to three quarters of a mile to pick someone up or drop them off, and it will stop anywhere along the route if someone flags them down, as Mann did.

“It’s time we got a public bus system in town,” she said.

“If the village is going to be friendlier to towards lower-income people, we need to have some sort of public transportation so that people without cars are able to get to such things as medical appointments, shopping and social service agencies. In addition, there are quite a few people who either cannot drive for various reasons or have decided that it is time to stop driving. Many of these folks are pretty mobile and can take advantage of the buses to get them where they need to go.”

Mann has been a strong advocate for extending the CATS flex service to Yellow Springs, Bookmiller said, and talks for the expanded services have been in the works for years. The agency had to figure out how to work Yellow Springs into its original Xenia/Fairborn loop and came up with a plan that only added a few miles to their existing route, he said. The agency wanted to improve its service to Greene County residents, and is pleased to be extending service to the village, he said.

In addition to going to Xenia (where the bus stops at the county complex on Ledbetter, the Xenia Towne Square and Greene Memorial Hospital) and Fairborn (stops at Kroger and Five Points), riders may easily transfer from the Yellow Line to the Orange Line in Fairborn to get to Wright State University, or transfer at the Xenia Towne Square to the Red Line for Beavercreek or downtown Dayton. And the transfers are carefully timed so there’s no more than a five-minute wait between one bus to another, according to Mann. Plans are underway to collaborate with Clark County for a connecting service to Springfield, which should be functional later this year, Bookmiller said.

And you can’t beat the price. A one-way ride is 50 cents, and a quarter for those 65 and older.

“As gas prices go up, this is a nice alternative, at prices that are cheaper than driving,” she said.

On Monday morning, the Greene County CATS Yellow Line bus pulled up to the library as scheduled. Inside were 16 comfortable seats, complete with seat belts and two baby carriers, along with passenger Kelly Clemmons of Fairborn, who said if the bus didn’t run, “I’d have to walk.” The buses have the lifts and safety equipment needed for wheelchairs and all are fitted out with bike racks, Bookmiller said.

In Fairborn, two regular riders of the Xenia/Fairborn flex bus got on. Both smiled as they boarded the bus, addressing bus driver Janet Holly by name.

“I love my job,” said Holly, a four-year bus driving veteran, as her riders found a seat. “I know everyone I pick up.”

Cynthia Clark was riding the bus to Xenia because she doesn’t have a car and Ron Frost is a Central State College student who has used the CATS service for two years to get to his classes.

Providing those without transportation access to educational institutions and jobs is one goal of the bus service, Bookmiller said. Funding for the bus is mainly federal, with monies from the Federal Transit Administration, or FTA. And the fares also help support the bus service.

It’s important, if villagers want the service to continue, to make use of it, according to Mann.

“If we ride a lot, it is likely to continue into the future. If we don’t, it will probably go away in a year or two,” she said.