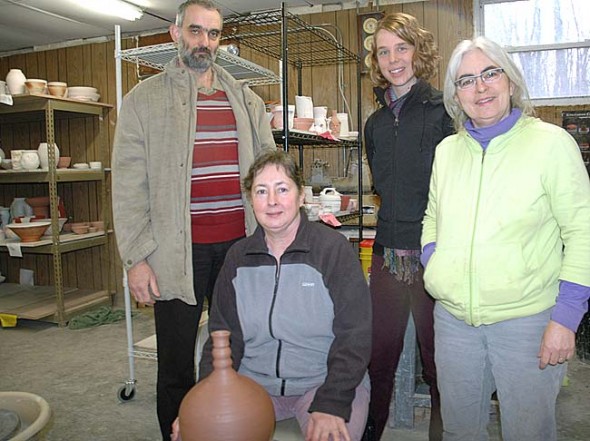 Hungarian master potters Vera and Ferenc Bognar are visiting Yellow Springs this week as guests of John Bryan Community Pottery, where they will present evening studio viewings on Wednesday, Thursday and Friday from 5 to 8 p.m. and an all-day workshop on Saturday. Shown above are, from left, the Bognars, with Vera at the wheel in front; JBCP manager Allison Paul and Beth Holyoke. (photo by Diane Chiddister)

In much of Hungary, handmade pottery is at the heart of daily life, objects both beautiful and useful. In villages, earthenware jugs for water remain unglazed so that the water inside can evaporate on the walls of the jug, keeping the water cool.

When scale builds up on the inside of the jug, it rattles when being carried empty to the well, then dribbles water after being filled. Speaking of the water jug, Hungarians say, “It walks to the well singing and on the way back it is crying.”.

Hungarian master potters Vera and Feri Bognar told American potter Dave Chesar this story, and others, about the close relationship that Hungarians have with their pottery during a trip that Chesar took to Hungary last year. Now back in his job teaching at the University of Dayton and on the board of John Bryan Community Pottery, or JBCP, Chesar helped to bring the Bognars to Yellow Springs for a week-long series of workshops.

This week the JBCP studio will be open Thursday and Friday evenings, March 14 and 15, from 5 p.m. to 8 p.m. so that villagers can observe the master potters at work. On Thursday, the Bognars will focus on traditional Hungarian water jugs and “jozsi,” matchstick holders in the shape of a man.

On Friday, the potters will feature vessels for children and other traditional forms. A donation of $5 is suggested for each evening.

On Saturday, a full-day workshop will take place between 9 a.m. and 3 p.m., during which the artists will share traditional forms as well as new work. Opportunities for participation are included and the cost is $45 for the day, including materials.

The event is the pot shop’s first international workshop, according to Manager Allison Paul, and one of a series of workshops that she hopes will attract Yellow Springers to the pottery co-operative.

“We have such a diversity of styles in our group, that it’s a natural fit to bring in another cultural perspective, another expression of clay,” Paul said in an interview this week.

In her new role as manager, Paul also hopes to hold a monthly workshop in order to help bring more villagers into the potshop, which currently has 18 members and is used regularly by about 12. But everyone is welcome to the events, not just members, Paul said.

“We want people to know the pottery shop is open to the community. and we are interested in expanding the diversity of those who use the space,” Paul said.

While the Bognars don’t speak English, villager Ferenc Jakob is serving as translater.
During an interview this week, Vera Bognar said she “fell in love with clay” during a high school workshop, and has been pursuing that love ever since. After studying pottery for two years following high school, she served as apprentice for two different potters, spending two years with one and three with another. She and her husband, to whom she taught the craft, currently have a studio in their home in a small town where they also teach classes to adults and children. They sell their work at street fairs and at an artists’ cooperative in a nearby city.

Hungarian pottery is distinctive for its “beautiful earthenware style” according to local artist Beth Holyoke, in whose home the potters are staying. Because Hungarian potters fire their wares at a lower temperatures than thosed used in this country, the work has a different look than most American pottery.  Also, much traditional Hungarian pottery is decorated in folk art designs.